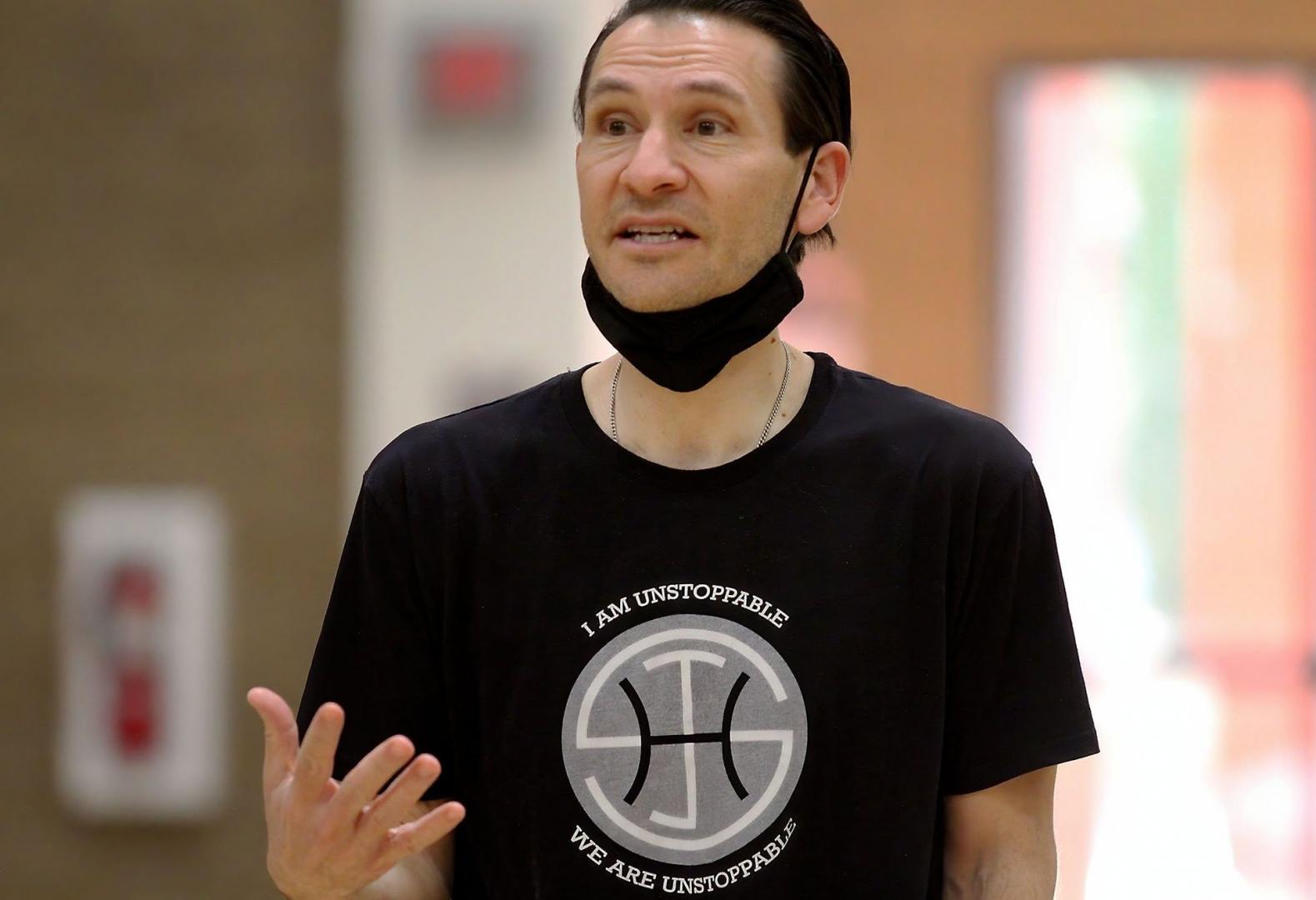 San Juan Hills boys basketball head coach Jason Efstathiou directs his team during a practice in San Juan Capistrano, Monday, Feb. 28, 2022. Efstathiou coached his team to the progran's first CIF-Southern Section Championship while also battling health problems from treatment induced neuropathy of diabetes where it forced him to take a year off in 2019. (Ryan Kuhn, SOCoPrepSports.com)

SAN JUAN CAPISTRANO — How do you relieve pain?

There are many remedies out there.

But for Jason Efstathiou, it has been coaching basketball at San Juan Hills High School.

So, this past Friday night, he wasn’t focused on the burning sensation radiating through his body. He was focused on the hard work, dedication and sacrifice that it took to defeat La Mirada for a CIF-Southern Section Championship.

Instead, the fire he felt was his love for his players and coaches.

One might wonder what would cause a burning sensation all over the body.

Efstathiou was diagnosed with adult-onset Type 1 diabetes nine years ago. He later developed treatment-induced neuropathy of diabetes (TIND). This condition affects up to 10 percent of patients with diabetic neuropathy, according to the 2020 edition of Autonomic Neuroscience.

“I didn’t have a history of anybody in my family having diabetes or being obese,” Efstathiou said. “It came on out of nowhere.”

Instead of a loss of sensation in certain limbs like typical neuropathy, his was the opposite. It was an intense, acute pain and a sharp burning sensation.

How was he going to coach?

Efstathiou was in the middle of his fourth season after getting the head coaching job at San Juan Hills in the summer of 2015. He spent four years prior as an assistant basketball coach under Keith Barnett at Aliso Niguel.

Efstathiou established a new culture within San Juan Hills’ basketball program based around togetherness while also being a world history teacher.

He hired a staff that believed the same.

“You can just see the love and passion that he has for this game and these kids,” assistant coach Art Carrido said. “He wants to have a positive impact on these players lives and I think that gets lost with a lot of coaches.”

By the end of the season in February 2019, the pain was more than just a nuisance. Through March, April and May of that year, the sharp pains and burning sensations got worse,  moving up his body to his hands, fingers and head.

His weight also fluctuated as he lost five to 10 pounds a week, and people in and outside the basketball program began to notice.

Why was this happening?

As a Type 1 diabetic, Efstathiou was really trying to improve his blood sugar numbers and dropped his A1C a significant percentage within months. By June his levels were normal but his TIND was getting worse.

“I couldn’t walk much. I was in bed just laying in the fetal position because I was in such excruciating pain,” Efstathiou said. “It got to the point where I had to buzz my head because it was so painful to brush my hair.”

Efstathiou did what he could to stay comfortable. He dipped his legs in buckets of ice six to 10 times a night just to try and cool off. He took supplements and tried different medications, but he was still miserable. 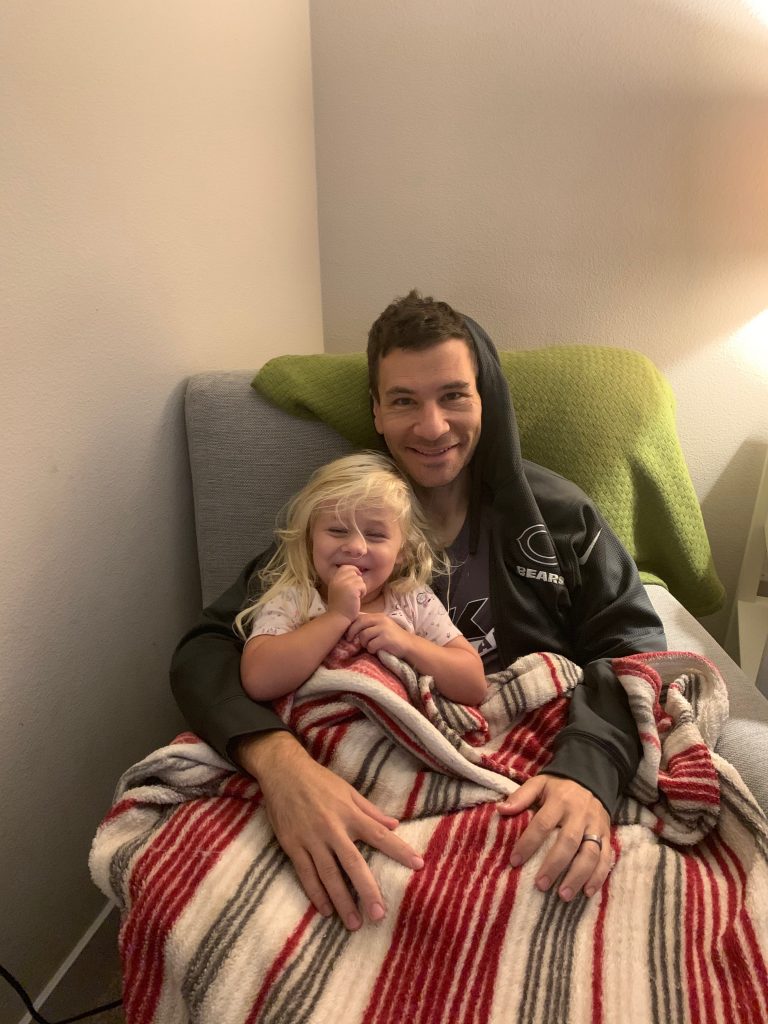 San Juan Hills coach Jason Efstathiou sits with his daughter, Sienna, while receiving treatment for his treatment induced neuropathy of diabetes that causes him to feel like he is burning all over. Efstathiou finally returned to coach Dec. 2, 2019. (Photo courtesy of Efstathiou family)

“Jason is such a strong person. I have never seen him that vulnerable,” said Efstathiou’s wife, Heather. “I was just trying to keep it together and take each day as it was coming. It was hard because I couldn’t really do anything to help him.”

A leave of absence

For months he continued to find a way to stay comfortable but it started taking a toll on him. He decided to take an extended absence from coaching and teaching as his mental heath was deteriorating.

“It came to a point where I thought I just couldn’t go through another day of this. I wanted to die,” Efstathiou said. The pain was so intense and I was barely sleeping. I was getting one to two hours a night.”

Parents within the basketball program started a fundraiser and raised more than $2,000 for their coach. The Efstathiou family was getting meal trains for weeks on end and the players, of course, kept in close contact.

“Everyone rallied to support him,” said Jen Smalley, former San Juan Hills principal, now assistant superintendent of secondary school leadership and instruction for the Capistrano Unified School District. “It was just heartbreaking to see him not do what his passion was.”

Efstathiou took the fall semester off but walked into the gym for practice on Dec. 1, 2019.

He started to feel better by managing his diabetes and continuing to get treatments and taking medication and supplements, but also found it necessary to return to work.

“When you run out of sick days you end up having to pay for your own substitute teacher,” Efstathiou said. “My paychecks were at the point where they were less than half of what I used to make.”

Efstathiou was back in the classroom full time but eased into coaching. He didn’t want to step on anyone’s toes and didn’t have the energy. He carried around a stool to sit on and used a megaphone to talk.

Still, he finally returned to his second home.

“When he was out, it pushed me to play even harder,” senior guard Mark Reichner said. “I saw him fighting this , and I wanted him to know I’d put in as much work as I could when he comes back. We could win together.” 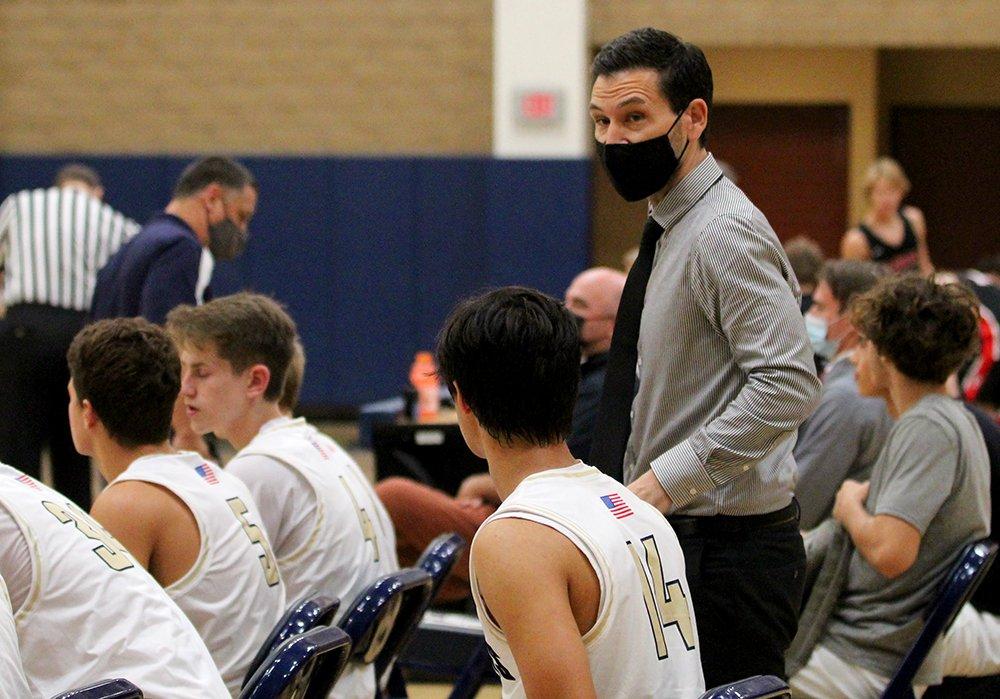 Despite other hurdles, such as playing a modified season during a world-wide pandemic, Efstathiou remained head coach and helped lead the Stallions to their first ever league title last Spring.

They lost to King in the first round of the 2021 CIF playoffs and sparked a different kind of burning sensation that Efstathiou wanted to use as motivation.

He made a triumphant return and his basketball team could do so, as well.

“This win was for Coach E,” senior guard John McFadden said following the win. “He does so much for us. Every hour of the day he is there for us. I couldn’t ask for a better coach. ”

Efstathiou smiled when he held the CIF trophy above his head. He hugged and kissed his wife and daughters following the game, but the next day the players were in the gym and everyone, players and coaches, was preparing for a run at the state title.

He knows his condition will stay with him but with one arm around his family and the other around his basketball program, there is no way he will let it stop him.

“The honest truth is I’m still in pain every day, but winning a CIF title was like a dream,” Efstathiou said. “Everyone is going to be their own harshest critic, but I felt like a burden was lifted.”

In some ways, Efstathiou’s fire has subsided, but when it comes to coaching San Juan Hills basketball, it will always burn hotter than ever.