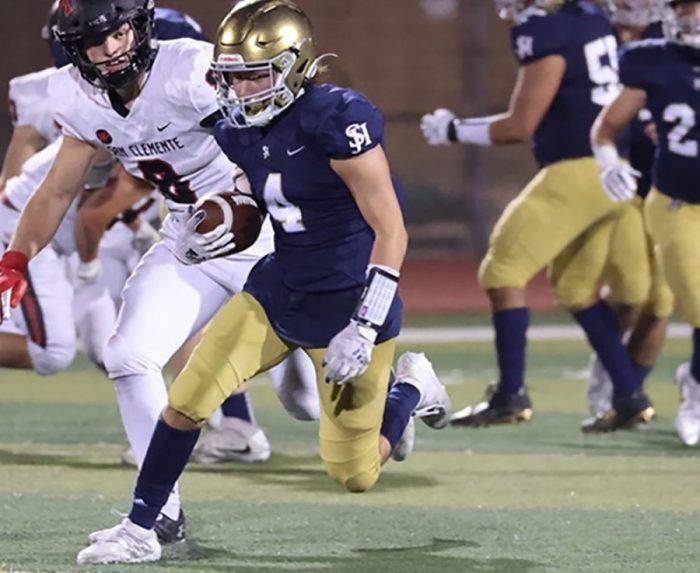 San Juan Hills Dashel Ross avoids the defense follownig a catch during a varsity football game on Friday, April 2. Ross finished with seven catches for 63 yards and a touchdown after being moved from quarterback to wide receiver before this year. (Courtesy of Scott Depenbrok)

He lined up in the slot and, early in the fourth quarter, he caught a 5-yard touchdown pass.

But while Ross’ performance was a silver lining to a 35-7 loss to the Tritons, his head coach knows how much Ross’ humility has meant to the Stallions this past week.

That’s because Ross hasn’t always been a wide receiver.

FROM QB TO WIDE OUT

As a junior, he lost the quarterback battle in fall camp to three-year starter Hudson Jones.

So he had an idea.

“I thought about it and inside wide receiver was perfect for him,” Frith said. “He is tough as nails, he is not afraid to go over the middle and make the tough catches.”

When approached with the idea, Ross’ response was straight to the point.

“I want to do whatever I can for the team,” Ross said.

While Ross has played football his entire life and has played multiple positions over the years, the joy he gets playing wide receiver comes because of the chance to be physical out on the field.

“Even when there are run plays, I can go out and block,” Ross said. “It feels like I am really playing football.”

His wide receiver coaches Tony Pena and Rocky Brown both not only complimented Ross on his work ethic but his ability to pick up the position quickly.

Ross entered the San Clemente game with just 35 yards receiving over the first two games. He finished Friday with seven catches for 63 yards and the touchdown after San Juan Hills sidelined receivers Braden Pegan and Cole Monach with injuries the previous week against Capo Valley.

Even though the two competed against each other for the starting quarterback job, since the coronavirus pandemic started, Jones said the two bonded during quarantine and have sparked a good friendship.

“He’s just so smart and knows where to go,” Jones said. “A lot of what we ran were option routes and we were on the same page. He’s just so reliable.”

Frith watched his senior move positions without hesitation and, in the process, has seen a culture built around humility taking shape at San Juan Hills.

“When you are humble, it doesn’t mean you’re thinking any less of yourself, you are just thinking less about yourself,” Frith tells his players.

But as a coach, Frith is also learning how important his players buy into that culture for coaching purposes.

Asking a quarterback to move to wide receiver has happened at all levels of football.

He said it’s common because quarterbacks are so used to having the ball in their hands.

“They want to be the guy that gets their number called,” Pena said. “Like Dashiel for instance, he just embraces the moment.”

Frith said Pegan and Monach will play this week against Mission Viejo but Ross will line up right alongside his teammates as the slot receiver.

He might not be a quarterback anymore, but now he’s writing a new chapter of his football career where his coaches say his potential can take him to a college football career.

And his mindset will never change.

“‘I’m just a football player,” Ross said. “I’ll go wherever they need me.”