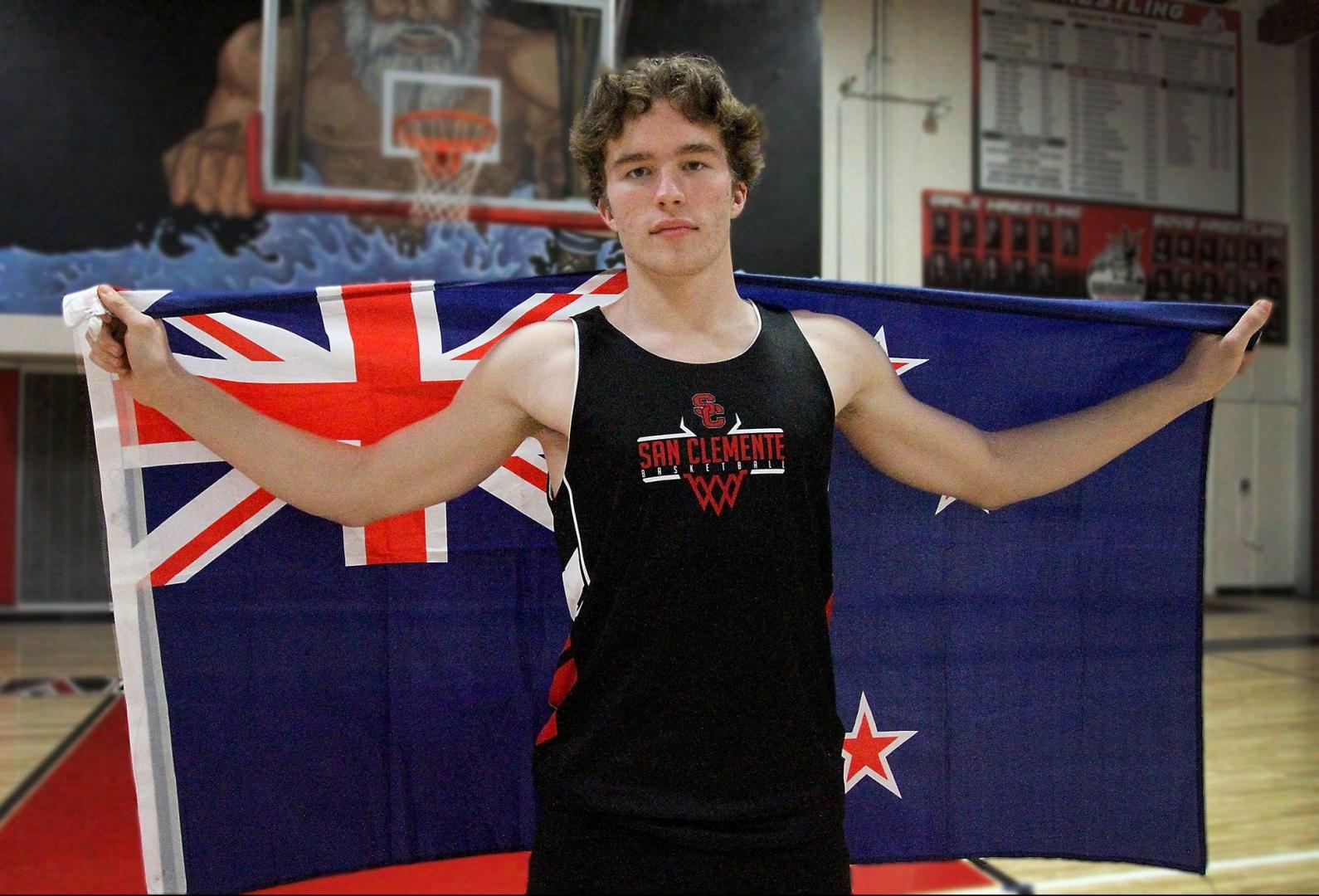 A new country, a new sport

San Clemente senior forward Asher Gardiner poses with the New Zealand flag before practice. Gardiner was born in New Zealand but moved to the United States while in eighth grade. (Ryan Kuhn, SOCoPrepSports.com)

A new country, a new sport

SAN CLEMENTE — Asher Gardiner stands up and gets a few shots in before San Clemente’s boys basketball practice officially begins.

“He’s an incredibly hard worker,” said coach Marc Popovich, just before blowing the whistle to get the attention of his players. “He’s just a great athlete.”

He ran thorough the drills nearly flawlessly, as though he has been doing them his entire life.

But the truth is quite the contrary.

Gardiner has only been playing organized basketball for five years, though his presence leads the Tritons this season.

Gardiner grew up in Christchurch, a city on the eastern shore of New Zealand’s South Island.

He rarely picked up a basketball despite the fact that both his parents played in college at San Jose State.

“We didn’t really push them down the basketball track because, a lot of times, kids start sports they are interested in far too early and then they get burnt out,” Asher’s mother, Amy, said. “We didn’t keep him from it, we just wanted to make sure he was really into it before he started playing.”

Instead, he had a typical childhood. He rode his bike to the park with friends, played sports such as rugby and soccer, and dabbled with the video game Minecraft.

“This first thing you notice about (New Zealand) is the weather,” said Gardiner, now a senior. “It’s colder because you are closer to the South Pole. Also it’s more suburban. It didn’t have that city feel.”

When Gardiner was 11, his parents told him and his two siblings that they were moving to the United States.

The first thing Gardiner saw when he arrived were the towering heights of Los Angeles. Something he was not used to.

“It was a big change for me,” Gardiner said. “I was mainly upset. I remember the night before we left I was playing an indoor soccer game with my friends. I scored nine goals but when I got home all the emotions came over me.”

Finding his love for basketball

Gardiner’s first experience loving basketball game in the form of video games. NBA2K to be precise.

It wasn’t long before he got involved in club basketball during eighth grade and by the start of his freshman season he was playing on varsity.

But Gardiner would be the first to tell you, he only had the basics down.

“I was raw,” he said. “I had to learn how to fit in and how everything was run.”

During Gardiner’s sophomore year,he broke his foot during practice. He didn’t know it was broken after playing on it for a week.

“I thought it was just a sprain or something,” he said.

Gardiner would have to get surgery, but he returned his junior season stronger than ever.

He averaged 15 points and 12 rebounds per game and was selected First Team all-South Coast League.

“He’s made progress by leaps and bounds,” Popovich said. “His position on the court, using his body, staying on bounds. He’s just improved so much.”

Gardiner is picking up right where he left off last season. He doesn’t have the veteran shooters like Jack Carroll and Tyler Nemeth around him, but knows he has the weapons to defend a South Coast League title.

The Tritons are already 6-3 this season and ranked No. 16 in Orange County.

“I feel like I’m a leader on this team, but this isn’t my team,” Gardiner said. “I’m out there with my close friends, so we are out there working together to win each game.”

Playing at the next level

Gardiner is looking to play college basketball but doesn’t have any Division I offers as of yet. He had some Division III interest but is weighing his options whether to take an offer, walk on or go back to New Zealand and play professionally.

“I haven’t been back since I moved,” Gardiner said. “It might be an experience. I try to keep New Zealand as close to me as I can.”