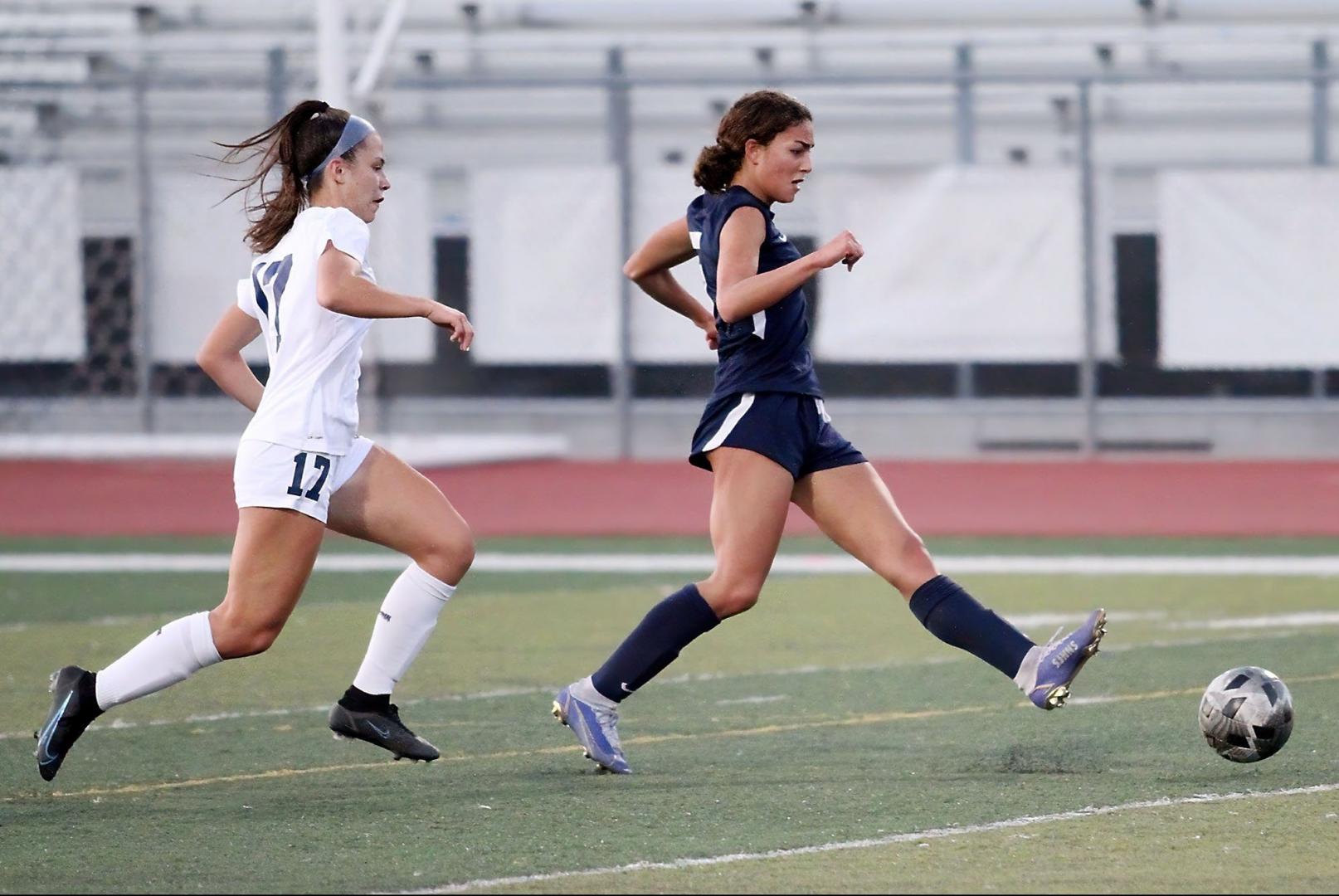 The win came on account of two second half goals from Jane Sanders and Megan Swift that put the game on ice, allowing the Stallions to leave the pitch with a 3-1 victory.

“The girls played hard, they battled,” said San Juan Hills head coach Farrel Moore. “I thought we knocked the ball around really well, and we scored some goals.”

Right out of the gate, the Stallions put pressure on the Trabuco Hills defense, controlling the ball on the outside.

After a few offensive sequences came up empty, sophomore forward Eva Andersen put the Stallions in front with a goal in the 14th minute. She forced a breakaway and shot the ball past the low right side of the Trabuco Hills goalie, who was forced to confront her one-on-one.

The Mustangs did not go down without a fight after falling behind early, adjusting with a very physical brand of defense. The fullbacks were able to force turnovers, and finally get square on offense.

Despite the mid-game adjustment, Trabuco Hills’ only quality shot on goal in the first half was saved by the San Juan Hills senior goalkeeper, Julia Prouty. She finished the match with four total saves.

The Stallions had one more opportunity to extend the lead before half, but could not convert on their corner kick in the 37th minute.

San Juan Hills led 1-0 at half, but head coach Farrel Moore knew that more adjustments could be made.

“We had to settle the ball down, and keep passing,” Moore said. “We wanted to get a little bit more possession, get behind them, and score some goals.”

The 12th year head coach saw exactly that in the second half, with San Juan Hills scoring a duo of late-game goals.

In the 47th minute, senior forward Jane Sanders lofted the ball in such a way that it forced a complete misread from the Trabuco Hills goalie, and the ball slowly bounced right over her reach for the score.

From that point early in the second half, San Juan Hills led 2-0.

After a back-and-forth tussle that featured saves on both ends, the two teams added to their tallies with under 10 minutes to play.

Junior forward Megan Swift concluded the Stallions scoring in the 70th minute, placing a screamer in the back of the net from point-blank range to extend the lead to 3-0.

“We literally just ran that play through practice,” Swift said. “Like I told Jaden [Hill], ‘one touch across,’ and I trusted her to get it right to me. It was a weird bouncing ball that kind of deflected off the defender, so I hit it as hard as I could. It hit the goalie, and then it came back at me, and I just knew I needed to place it.”

Prouty and the defense shut down any attempt of a late Trabuco Hills comeback, and the Stallions pulled away with their 11th win of the season.

If the Stallions win their rematch on Friday, they would have a chance to at least tie San Clemente (3-0-2) for first place in the South Coast League, when they face the Tritons on Tuesday, Jan. 25.

“We need to be serious,” Swift said. “We can’t make dumb mistakes, and we need to take care of our opportunities up at goal. We’re better than [San Clemente], we know that, we just have to take advantage of our talent and skill.”