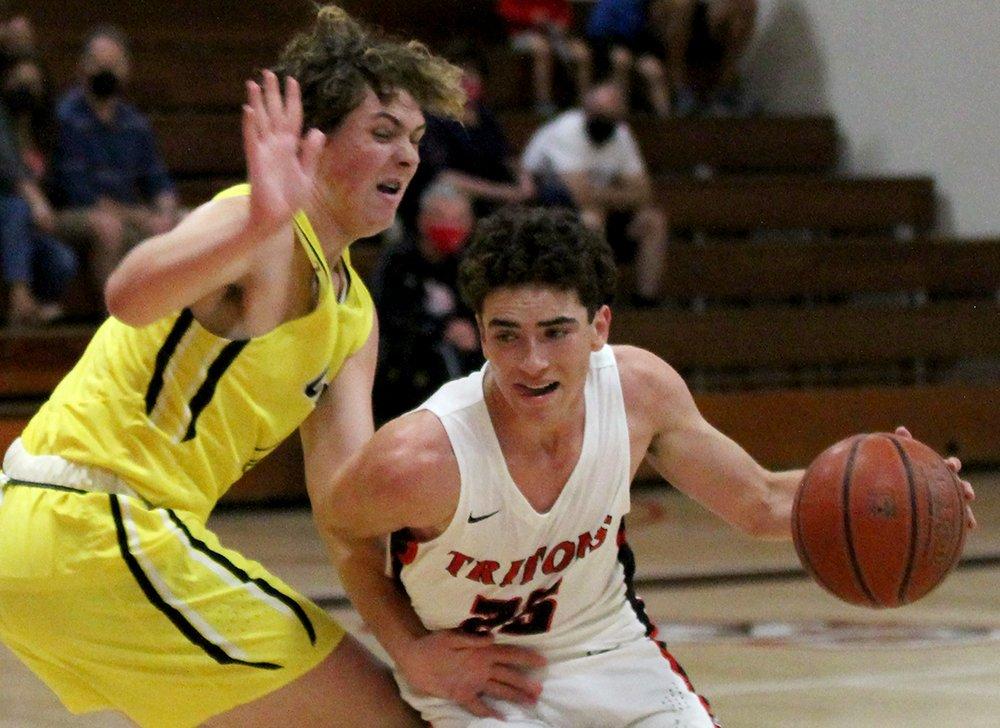 But when the two teams met again on Friday, the outcome was quite different.

It was Capo Valley’s first loss of the season and the lowest point total since scoring 40 points against Fairmont Prep in the second round of the CIF-SS Division 2AA Championships in February 2020.

“This was a great win for us,” Tritons coach Marc Popovich said. “Our defensive effort was spectacular, and we were in tune in a way we haven’t been most of the season.”

Capo Valley took an early lead in the game, but it was quickly erased by a 3-pointer from Jack Carroll.

Senior guard Tyler Nemeth found his touch and, after seven consecutive points, the Tritons held a 14-9 lead after the first quarter.

“”We were moving the ball, we were getting open, and we were taking good shots,” said Nemeth, who finished with 10 points.

Other players aided Nemeth with the offense, such as 6-foot-7 junior forward Asher Gardiner’s presence in the paint and a 3-pointer from Kade Harrick.

On the other end of the court, the Cougars continued to struggle finding points and rebounds as they finished with five points in the quarter and looked up at a 26-14 deficit.

San Clemente’s momentum carried through the second half as Nemeth took a backseat and watched as Capo Valley had no answer for Gardiner.

He finished with six of his 17 points in the third quarter and helped hold the Cougars to just another five points in the quarter.

Popovich knew Capo Valley could put together a run, and it finally came in the fourth quarter.

Colin Thurrell and Aiden O’Neill each hit a 3-pointer and, after Mulligan implemented full-court press, momentum began to shift the Cougars’ way.

Capo Valley scored 10 unanswered points to cut their deficit down from what was an 18-point advantage earlier in the quarter to just 46-41 with 1:37 remaining.

“I’ve seen them be susceptible to the press before,” Mulligan said. “They played Trabuco (Hills) and they lost an 18-point lead. I don’t think you can put it on the whole game but we picked our spot. I’m proud of our guys for still battling.”

San Clemente has been no stranger to full-court presses this season, and that has caused a lack of focus at times but, after Capo Valley was forced to foul, the Tritons slowly brought their lead back up with successful trips to the foul line.

O’Neill made one final 3-pointer with seven seconds left, but the seven-point lead was too great.

The win was San Clemente’s first at home win against Capo Valley since January 2019.

“Ever since we saw Capo on the schedule, my goal was to knock them off,” Nemeth said.

San Clemente will spend next week facing Trabuco Hills and Mission Viejo in league play, while the Cougars return home on Friday to host Tesoro, and then go on to play Corona Centennial in the Nike Extravaganza at Mater Dei on May 15.