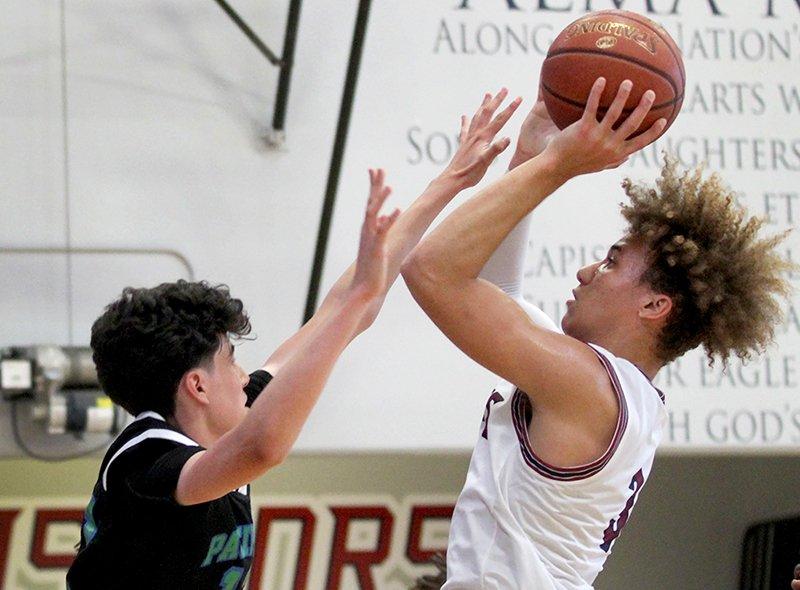 SAN JUAN CAPISTRANO — Capo Valley Christian boys basketball coach Chris Childress said his team is different than it has been in the past.

“On any given night, we could have four guys score 12-plus points,” he said.

On Saturday night, it was just three players scoring more than 12 points, but they certainly made an impact.

Capo Valley Christian is just two years removed from winning the CIF-Southern Section 3A Championship with a win over Palm Springs.

With players like G’Bye and seniors Caleb Faulk and Scottie McDowell, the Eagles showed their experience early.

G’Bye and Garza started the game off with a 3-pointer each, but the Seawolves hung around and eventually took a 13-12 lead with two free throws by Nathan Clark.

The run didn’t last long, however, as 6-foot-7 Athian Athian converted a three-point play and the Eagles regained the lead.

During the second half, CVCS turned up their tempo and its shot selection.

G’Bye hit two more 3-pointers and, after another outside shot by Garza, the slim advantage at the end of the first quarter turned into a 35-20 lead.

“I’ve always been that shooter,” said G’Bye who finished with five threes. “I learned to have confidence in my shot.”

The Eagles outside scoring continued early in the second half as G’Bye added his fourth, followed by a jump shot by Athian in the corner.

Capo Valley Christian finished the game making 8-of-18 3-pointers, and Pacifica Christian could not keep up with the pace of the game.

By the fourth quarter, the Eagles had firm control as West came down the lane on two separate trips to excite the crowd with dunks.

“Running in transition is the best thing we can do,” West said.

The Eagles sealed the win when G’Bye hit a 3-pointer as he was fouled to complete the four-point play.

While G’Bye and Jones were the only two players to score more than 12 points on Saturday night, six players scored at least eight points, and CVCS scored its highest point total since it scored 88 points against The Webb School in 2018.

That doesn’t mean there is not room for improvement.

Childress preaches defense and, because of the pandemic delaying the season and practices, he knows quickly creating chemistry is key.

“This was our first game in 14 months,” Childress said. “A lot of practice was just skill work. We couldn’t play five-on-five or anything like that.”

The Eagles will continue their season on Monday when they host Valley Christian.