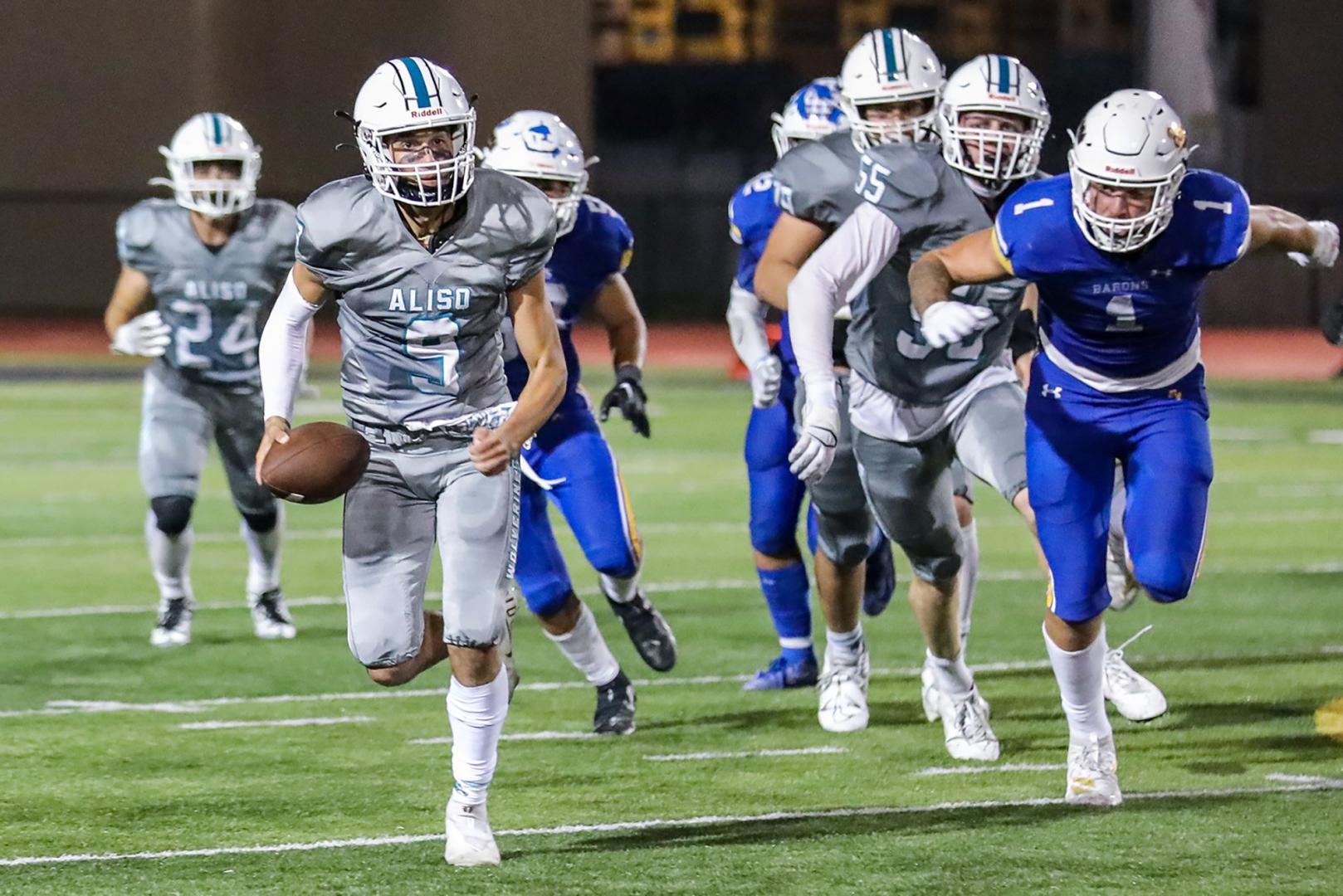 This article is complementary. For more great content, sign up for a SOCoPrepSports Premium membership for either $7/mo or $60/yr

HUNTINGTON BEACH – For the first time this season, the Aliso Niguel football team went down to the wire against an opponent.

The Wolverines came up short against Fountain Valley falling 16-14 on Friday at Huntington Beach High School.

“We called it a ‘playoff game’ and it sure seemed like that,” Wolverines coach Mike Callahan said. “Fountain Valley is a very good football team, they’re very physical. What we take out of this, we don’t quit, we don’t point fingers, we don’t fall on each other, we just play football.”

Both teams were coming off their bye week and early on, the rust showed in their offenses. Fountain Valley quarterback Noa Banua was picked off by Chase Westphal in Aliso Niguel territory, which crushed a promising drive, but the favor was returned after the Wolverines went three and out following the interception.

The two teams were scoreless after the first quarter, but the Barons were on the move and had entered the red zone. Three plays into the second quarter, Fountain Valley scored first, as Banua hit Nolan Oliveres for a 5-yard touchdown pass.

The next four drives between both teams featured punts, with the fourth punt courtesy of the Barons pinning Aliso Niguel at their own two. A face mask penalty on the Barons turned into an automatic first down, giving the Wolverines a little more breathing room in terms of operating its offense.

Aliso Niguel eventually took advantage of the penalty.  Three plays later, quarterback Hunter Najm found Jaylen Williams, who hauled in the ball, despite facing coverage from a Baron defender. On the next play, Jack Gill rumbled in for a 23-yard touchdown run to tie the game.

The Barons utilized a good kick return and tried to get one more touchdown to put themselves up seven. But they had to settle for a field goal after the Wolverines stopped them on third down, as Oliveres kicked a field goal from 41-yards out to put Fountain Valley up 10-7 at halftime.

Aliso Niguel’s first drive of the second half was aided by penalties from Fountain Valley, which slowly but surely got them into Baron territory. Eventually, Gill got the Wolverines down to the Barons’ two-yard line after a 39-yard run, which was capped off by a two-yard touchdown off a direct snap from him.

“He’s a stud. He doesn’t say much, but on Friday’s he does,”  Callahan said about Gill.. “He’s fun to coach, he’s a great kid and I can’t say enough good things about him.”

After another good kickoff return, the Barons marched into Aliso Niguel territory after an unsportsmanlike penalty by the Wolverines and a timely first down run. But the drive stalled out on the 30, as Fountain Valley was stopped short on a 4th and 1 run as the Wolverines took over.

Aliso Niguel eventually punted and Fountain Valley went to work, eventually converting a 3rd and 11 courtesy of Banua finding Scott Peshke for a 33-yard completed pass. The drive got all the way down to the Wolverines’ three, but on fourth down, Gill made a tackle on a run attempt to get his team the ball again.

The Barons’ defense eventually forced Aliso Niguel to punt, and the Wolverine defense yet again had to come out to force the Barons’ offense off the field.

The third time was not the charm for Aliso Niguel, as on the third play of the drive, Banua found Luke Taylor for a big first down off a 19-yard pass. Three plays later, Banua found Taylor a second time on the drive as he scampered in for an 18-yard touchdown to give Fountain Valley the lead despite a missed extra point.

The Barons forced the Wolverines to punt, as it seemed all but over for the Wolverines. But on the second play of the drive, Gill intercepted Banua at midfield, giving Aliso Niguel one last chance at a game-winning drive.

The Wolverines eventually got down to the Barons’ 17, where they eventually brought out Gavyn Nobles to try and kick the game-winning field goal. After a high snap, Fernando Garcia partially blocked the field goal, causing it to miss wide right, allowing Fountain Valley to take over and run out the clock.

“That is a well-coached football team, they should be a playoff team. I know the Sunset League is a very difficult league, but if I’m in the Sunset League, I’m circling the game [against Fountain Valley] because they come to play and they play all four quarters,”  Callahan said about the Barons.

Aliso Niguel (3-2) returns to action next Friday when they host Alta Loma at 7 p.m.