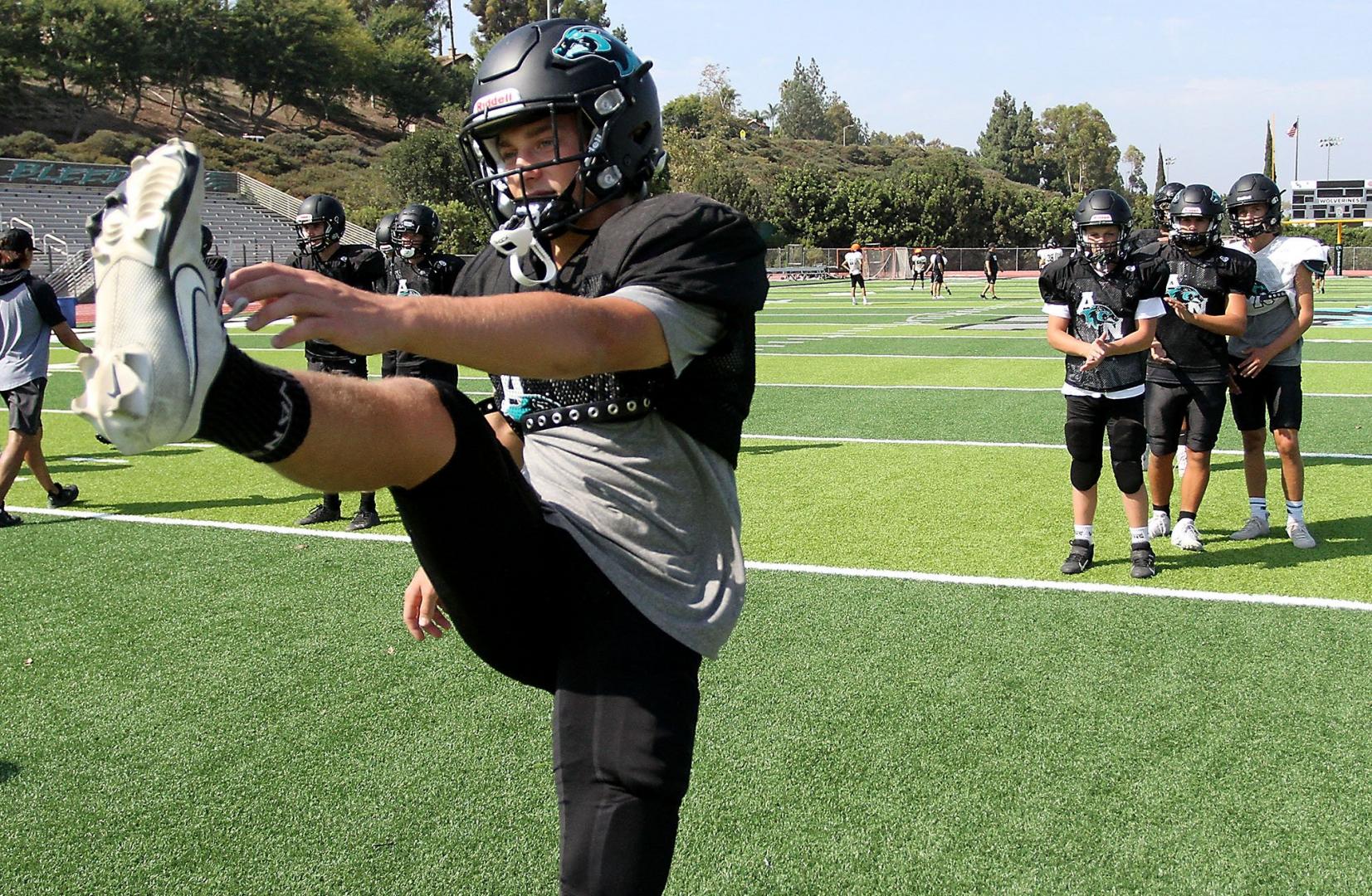 Aliso Niguel junior running back Jack Gill participates in stretches during the start of practice at Aliso Viejo High School, Monday, Aug. 30, 2021. Gill finished last Friday with two touchdowns, one on offense and one on defense as the Wolverines improved to 2-0. (Ryan Kuhn, SOCoPrepSports.com)

Especially after it claimed two road wins against Huntington Beach and San Gorgonio in consecutive weeks.

The Wolverines enter their third game as one of two undefeated teams in Orange County after finishing last spring without a win.

Los Amigos is 1-0 after a win over Ocean View after finishing last season 0-3.

But Aliso Niguel head coach Mike Calahan doesn’t necessarily think he or his players have turned the program around. It was always headed in the right direction. He said playing during the pandemic was just difficult to navigate.

“I think the difference has been our training,” Calahan said. “We finish games the right way and we are mentally stronger. Half our guys aren’t playing two sports at the same time so they have more energy. The details are showing.”

Aliso Niguel’s success this past week primarily came through because of a proficient running game.

“We went up there and did what we are supposed to do,” Calahan said. “I tell our guys the only team that can beat us on a Friday is us.”

Junior running back Jack Gill, who is playing his first season of varsity, finished with a team high 51 yards on just five carries that included two touchdowns, one on offense and also a 40-yard fumble recovery score.

“It was a bad snap and I picked it up and broke through,” Gill said of his fumble recovery. “My teammates did a great job blocking for me.”

This season Gill has already eclipsed 100 rushing yards in just his first two games and the coaching staff sees a bright future for their young running back.

“Jack is just what we like to call a true football payer,” Calahan said. “You wouldn’t know he plays football when he walks around campus but you put a helmet and shoulder pads on him, he just goes.”

Gill will spit time with senior running back Chase Christner this season because Calahan knows the importance of having multiple options as the season continues.

“Everyone does it now,” Calahan said. “If you can use multiple backs, everyone stays fresh, it gives an advantage later in the game.”

Another player who has had a strong start to the season is senior quarterback Shaun McCaghren.

McCaghren struggled completing just 44 percent of his passes and throwing four interceptions in four games last season. Since, he has really been working on fine tuning his throws.

Through his first two games he has completed 55 percent of his passes for 214 yards, three touchdowns and no interceptions.

“I know it’s going to become a bigger part of our offense,” McCaghren said of his passing game. “That and staying mobile is going to be key for me.”

McCaghren was in a quarterback battle with sophomore Hunter Najm during the summer but Calahan is happy with the decision to start his senior.

Aliso Niguel has started three consecutive seasons with a 2-0 start before the pandemic hit. Each of those finished with a trip to the postseason.

Now with eight games left, there is still plenty of story to be written, but the Wolverines are ecstatic to put the pandemic season behind them and move forward.

Aliso Niguel’s next game will start its home schedule against Bellflower.

“We have two just keep this energy up and stay with the game plan our coaches give us,” McCaghren said. “If we do that we will be fine.”