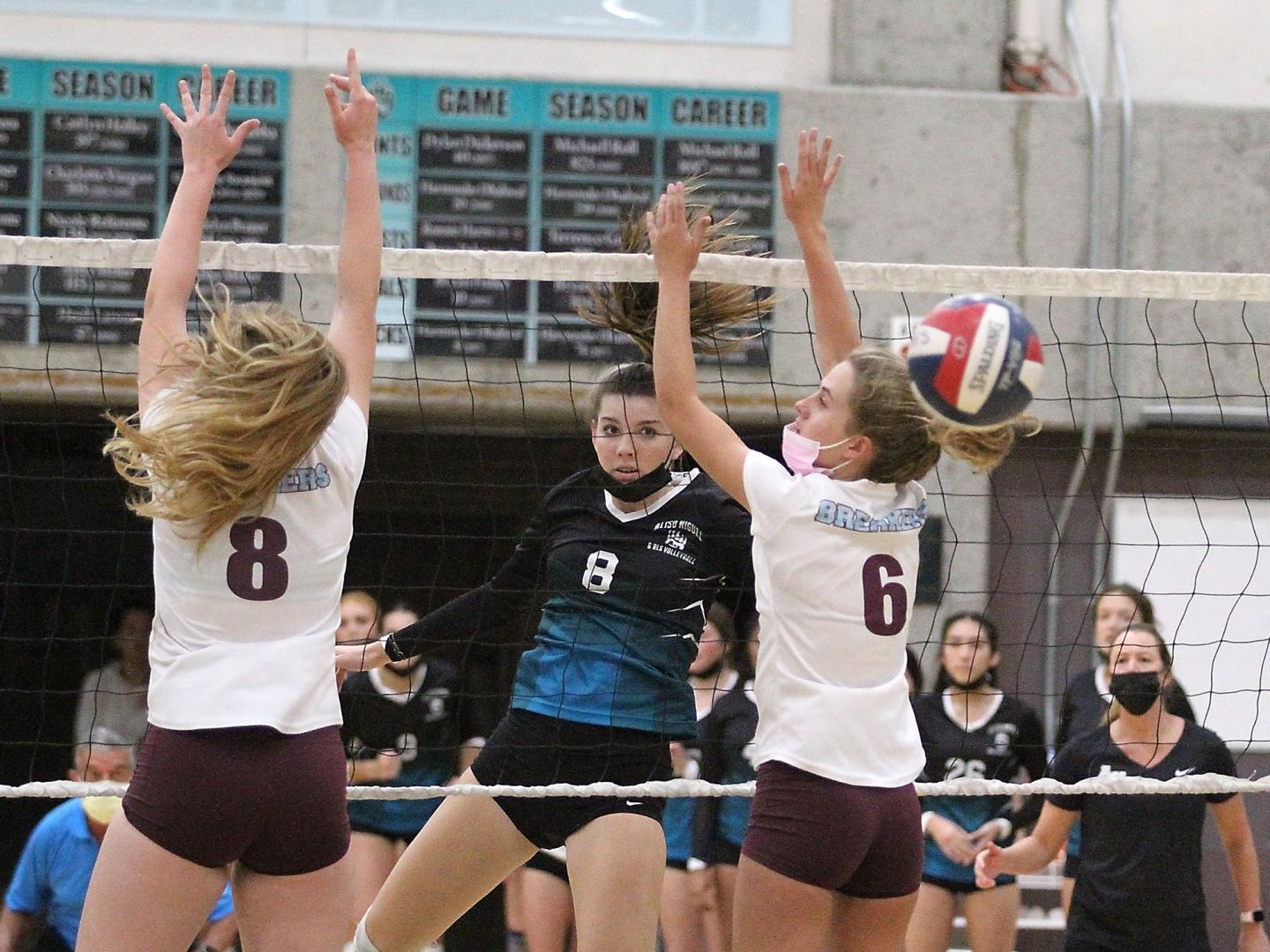 She has been a coach for the last 24 years.

But she had never seen anything like what happened on Wednesday night.

She stood from her bench and watched her team rally back after being down two sets in the CIF-Southern Section Division II quarterfinals against Laguna Beach.

“There are too many emotions,” Whiting said afterwards. “This match was just unreal.”

The Wolverines were forced to make a change before the match even began as their starting setter, Nicole Feliciano, suffered back spasms during warmups and was unable to complete.

It didn’t take long for Laguna Beach to take advantage.

The Breakers went on a 7-1 run that saw scores from Sofia Reavis, Sara Johnson and Sydney Freeman.

Aliso Niguel senior setter Shelby McElroy got the news that she would be starting just minutes before the match started and tried to quickly create some chemistry with her offense.

“It was a hard position to be in,” McElroy said. “I’ve played with these girls for four years so I really had to rely on them. As a setter, you are kind of the quarterback so it was my job to find that chemistry.”

But Laguna Beach seemed to have an answer every time Aliso Niguel created momentum. The Breakers finished the first set with five straight points to win 25-17.

The Breakers momentum picked up even more in the second set as they jumped out to a 14-9 lead.

Aliso Niguel bounced back and even took the lead when libero Danet Whiting scored an ace but the Breakers capitalized on mistakes. Natalia Hagopian came away with two more scores and Laguna Beach took the second set, 25-21.

The Wolverines had to find some chemistry. They just didn’t think it would come this late.

The third set started much like the first two.

Laguna Beach jumped out to an early lead and after blocks by Hagopian and Jacquelyn Wittleman held a 10-7 lead.

It was then that Whiting came to her team with a message.

“It came down to them and how they wanted their last memory this season,” Richie Whiting said. “I just wanted them to go out and have fun and start playing our volleyball.”

The advice started to work and the tides began to change.

Outside hitter Kendra Duffey and opposite Madyson Smith and came together to score on blocks to take a 16-13 lead and then Duffey finished the set scoring six of her team’s final seven points to claim a 25-17 victory.

Buy the fourth set Aliso Niguel had all the momentum.

Laguna Beach tried to seal the match when it took a 13-11 lead midway through the set but the Wolverines quickly stopped the threat and took advantage of six errors to win 25-21.

“I started hitting down the line,” Duffey said. “I wanted to find that sweet spot.”

Aliso Niguel played just one five-set match all season. It was a loss to San Clemente.

History would not repeat itself.

Laguna Beach tried to shift the momentum by taking two straight timeouts but, it wasn’t long before the crowd rushed the court and celebrated its trip to the semifinals.

Duffey and Travis each finished the game with a team-high 15 kills.

And McElroy, she had her senior moment, starting her first intense playoff game.

Aliso Niguel will now host La Salle in the Division 2 Semifinal this Saturday. The winner will face the winner of Huntington Beach/Palos Verdes in the finals on Nov. 6.

“It’s all about belief and trust,” Duffey said. “We can do this.”

Games on Saturday at 6 p.m.