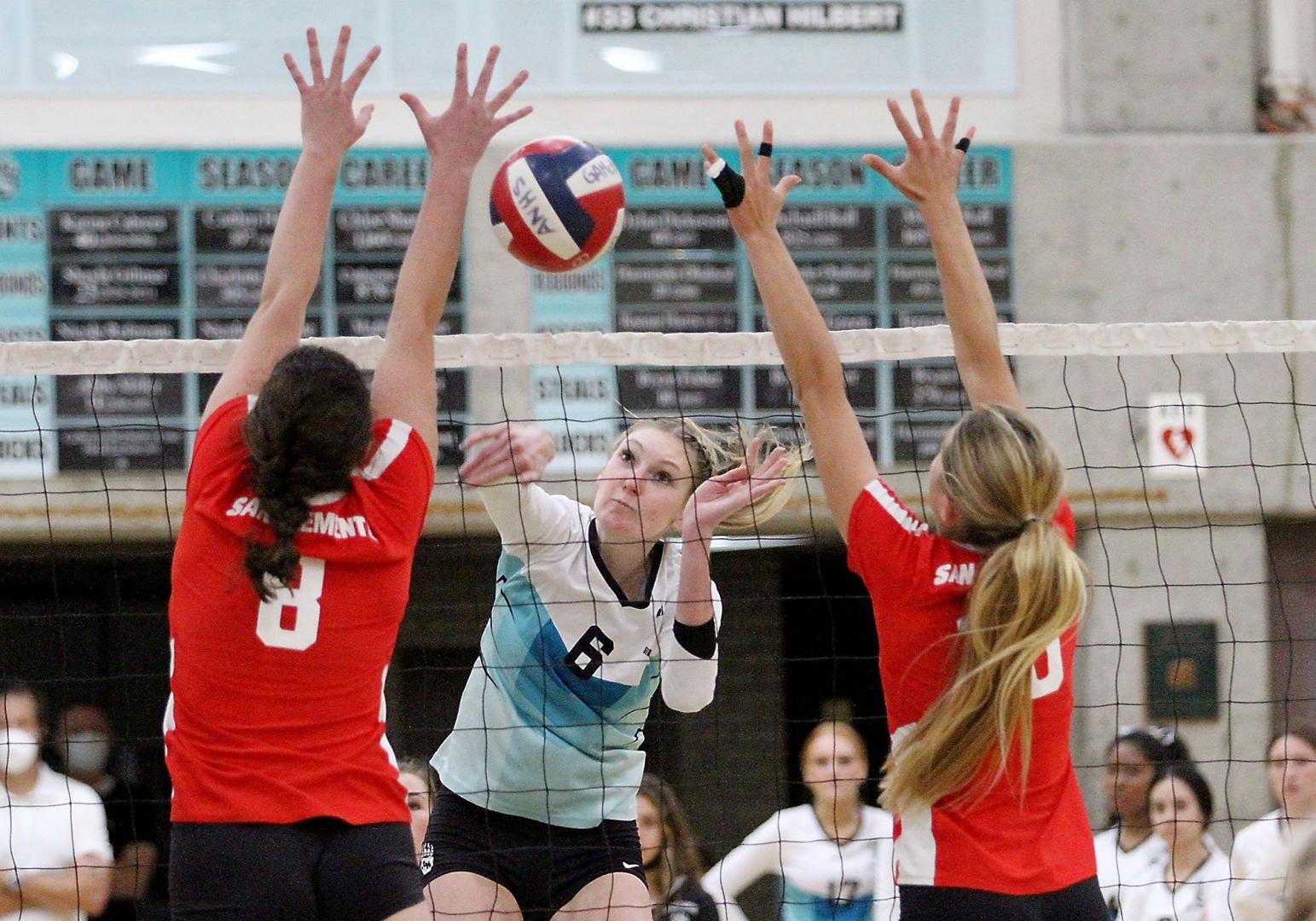 A win would put the Wolverines all alone at the top of the South Coast League.

“I don’t want to say we have been looking towards San Clemente, but we were excited for that match,” Aliso Niguel coach Richie Whiting said. “This was the game we were all getting ready for.”

“This was a really big win for us,” Whiting said. “Our passing was really good which got our middles and everyone involved.”

One middle in particular was senior Brooke Pattschull.

Aliso Niguel’s senior not only stands at 6-foot-4 providing size at the net, but she takes pride in her defense.

She started out with four blocks as her team led the entire first set.

“Because my arms are so long, it really helps me out with blocking,” she said.

San Clemente attempted to start a rally, cutting its deficit down to just three points at 17-14, but the Wolverines responded with kills by opposite Madyson Smith and Eva Travis to go on and win the set.

“We play with (San Clemente’s players) on club teams so we know each other really well,” said Travis, who finished with 17 kills.

The Tritons might not have had the size that Aliso Niguel displayed, but that didn’t hinder their offense.

San Clemente fought to take the lead in the second set when outside hitter Sofia Williams came away with a pair of kills.

Lily Dwinell and Quinn Looper quickly aided their teammate and Abigail Brown added a block just before the Tritons took the second set.

With momentum clearly on its side, San Clemente remained focused. The third set saw the Tritons battle back once again and take control.

Kills by Dwinell and Brown, pushed them out further and a few points later, won 25-21.

It was the first time Aliso Niguel trailed since a loss to Laguna Beach back in late August.

“I was a little nervous, I’m not going to lie, but I know my team and I know we are going to fight,” Pattschull said. “Sometimes we let up but we really wanted to beat San Clemente.”

Pattschull finished with a total of 14 kills and six blocks, but she didn’t do it alone.

Travis came to her aid with five kills and an ace in the fourth set.

While she isn’t new to volleyball, she is new to South Orange County after transferring last year from Bend, Ore. but quickly found a new home.

“ I love my new family,” Travis said with a smile. “Moving in the middle of the pandemic it was hard to get people, but these girls really welcomed me with open arms.”

San Clemente put together a short 6-2 run at the end of the set, but Travis added her fifth kill to give her team a 25-19 win and tie the match up.

Aliso Niguel quickly took control of the fifth set and never looked back.

Pattschull scored five of her team’s first eight points and after Travis added a kill, San Clemente had to take its second time out, trailing 10-4.

It was only a matter of time until Smith added a block and the Wolverines won the third match and the set.

Aliso Niguel will play their next three matches against South Coast League teams with losing records before finishing up the season with a second meeting against the Tritons in San Clemente.

The rematch might be two weeks away, but the Wolverines know its importance will match or even surpass Tuesday’s win.

After all, a South Coast League title might be on the line.

Many teams are having senior night before the final regular season home game since the coronavirus pandemic has gone on.