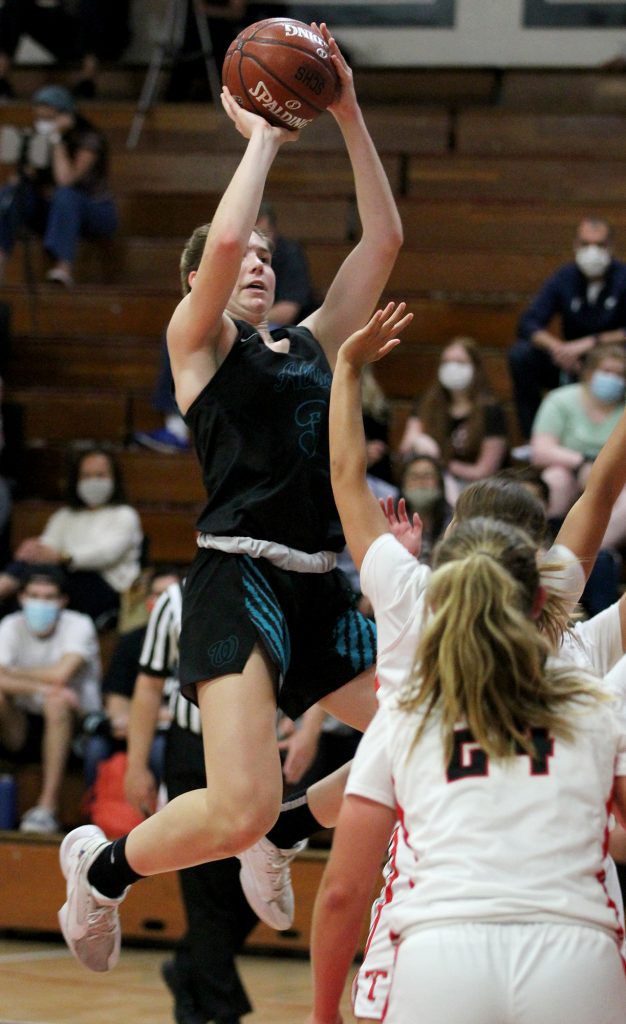 SAN CLEMENTE — Aliso Niguel junior forward Shayla Gillmer heaved a prayer from half court at the end of the third quarter .

It was answered, and her team and the visiting fans celebrated like they won the game.

“This game is all about momentum,” Aliso Niguel coach Brad Johnson said.

Gillmer’s shot started a 19-9 run that ended when the Wolverines left with a 53-51 victory over San Clemente on Thursday night.

The win gave them a season sweep and firm control of a South Coast League title.

“It really got the team going in the fourth quarter,” Gillmer said of her half-court shot. “It brought so much energy. I can’t believe it went in.”

Aliso Niguel couldn’t get any offense going in the first quarter.

After quick scores by Karina Cabrera and Shanna Brown to start the game, the Tritons sped up their offense to match the Wolverines and were able to get easy transition layups.

Johnson said it was ironic after seeing a half-court leave with such a low percentage going in coupled with the fact that his team was unable to hit a shot inside to start the game.

Both teams’ offenses sputtered throughout the second quarter, but Johnson wasn’t worried.

His team overcame a slow start earlier this week against Dana Hills.

“I told them to just keep playing. There is a lot of time left,” Johnson said.

The Wolverines are coming off 20 wins last season, but graduated a key scorer in Catherine Swanson.

“She has really come on,” Johnson said. “There were always glimpses but, this offseason, her game has really blossomed.”

She made her presence felt with some shots inside and her ability to get to the foul line.

She finished with 12 points, but also had some help from her teammates in the fourth quarter.

While San Clemente was struggling to find offense, Aliso Niguel was getting shots from players up and down its lineup.

Brown hit a 3-pointer and finished with a game-high 17 points, Cabrera hit a 3-pointer of her own and senior Sara Eyre hit a shot from the top of the key to take a commanding 53-49 lead with 49 seconds left.

San Clemente had opportunities to cut into the lead in the final minute after the Wolverines missed some free throws, but missed shots by Stewart and Pham handed Aliso Niguel the win.

“We had some carless turnovers and they stepped up to hit some big shots,” Tritons coach Kerri Husbands said. “Despite the loss, I’m super proud of the girls.”

San Clemente was led by Claire Pham’s 19 points and will now look to finish the regular season against Capo Valley and Mission Viejo early next week.

As for Gillmer, does she have another half-court answer in her pocket?