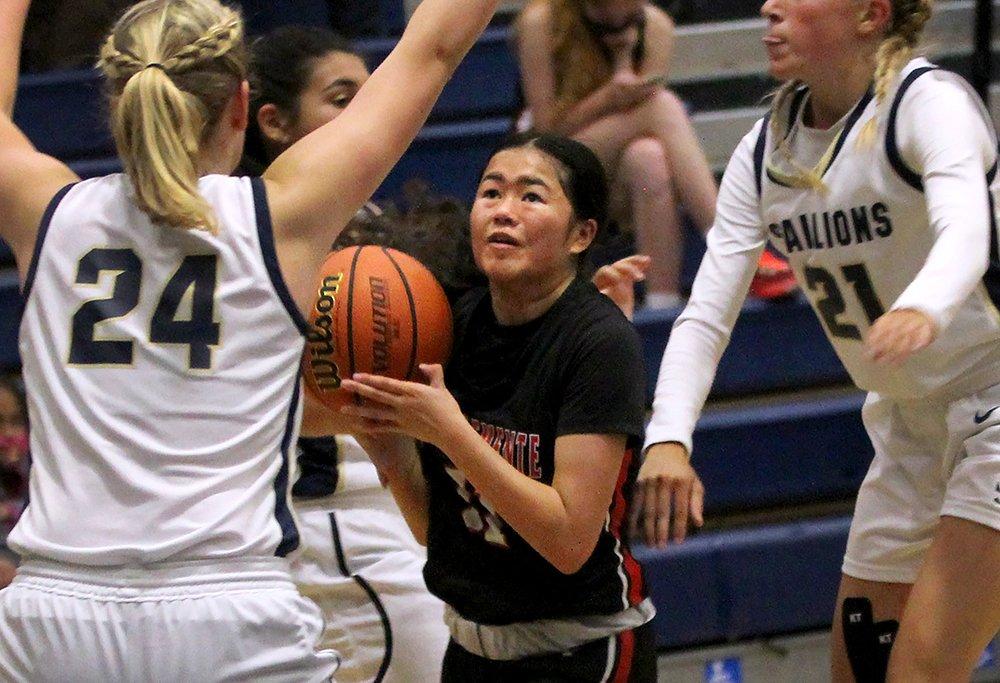 SAN JUAN CAPISTRANO — San Clemente’s girls basketball team knew it could be in a for a battle on Tuesday Night.

San Juan Hills came in with nine wins and key victories over Capo Valley and Tustin.

Add a full-court press and some 3-point shooting, and the Stallions gave the Tritons all they could handle.

That was until the third quarter, when San Clemente pulled away for a 43-32 win at the Woodlands.

“We just had to tighten up a few details (in the second half),” San Clemente coach Kerri Husbands said. “We are such a young team, you have to coach them out there, but they have responded really well.”

San Juan Hills jumped out to an 8-4 lead midway through the first quarter, but the Tritons young players responded when freshman Claire Pham hit a 3-pointer in the corner and sophomore Kyle Franklin scored inside.

The Stallions kept pace with their opponent as Elizabeth Elder scored five consecutive points, but could not increase their lead to more than four points.

Pham shifted the momentum right before halftime as she sent San Clemente into the locker room with a 22-19 lead on a 3-pointer.

She finished the game with a team-high 15 points and led the team in scoring for the second consecutive game.

“We were just moving the ball around really good,” Pham said.

While Pham is playing her first season on varsity, her coach said she has limitless potential.

“She is a tremendous young player and one of the funniest girls you will meet,” Husbands said.

Throughout the third quarter, San Clemente slowly started to break away.

Senior guard Kyra Stewart, who will be playing for NCAA Division II Simon Fraser next year, hit a 3-pointer, and the Tritons began to handle the Stallions’ relentless pressure.

On the other end of the court, San Juan Hills couldn’t make a shot.

The Stallions were held without a field goal for the first five minutes of the fourth quarter until Chloe Dayton scored a putback.

“They knew we had to step it up,” Husbands said of her team. “We have been playing this way all season but, when they figure it out, they get stronger and stronger as the game goes on.”

Despite the loss, San Juan Hills was led by seven points from Elder.