Colony takes down the Tartans 49-41 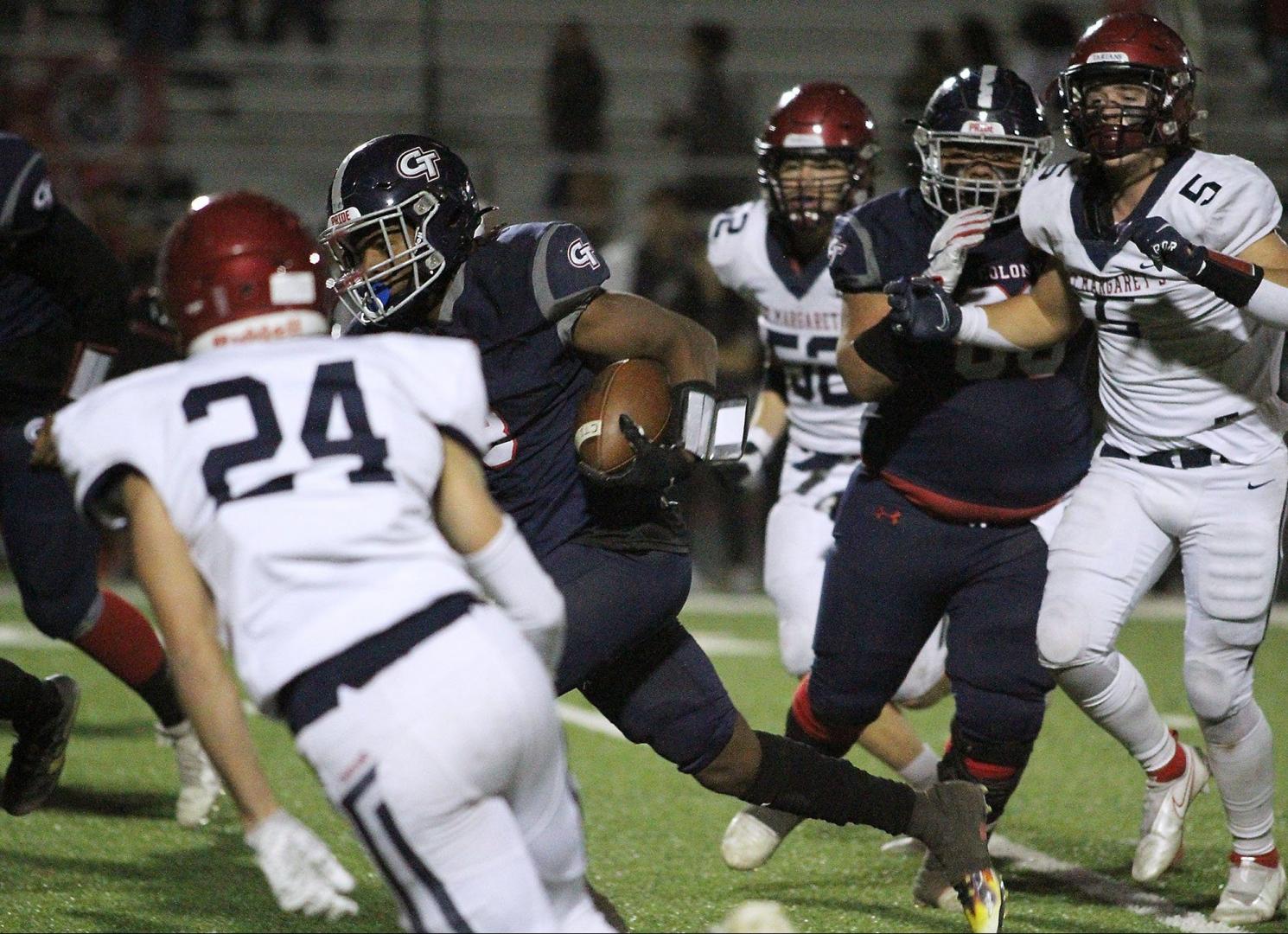 ONTARIO — Everything was going great for St. Margaret’s football team heading into Friday.

It just came off of a comeback win over Claremont last week at home.

The win was its seventh in a row.

A championship was in its sights.

That was until it met Colony.

The Tartans watched as the Titans put up 35 unanswered points that ultimately led to a 49-41 loss in the CIF-Southern Section Division 9 Championship at Colony High School.

Afterwards, all coach Kory Minor could do was express to his players how proud he was.

“We played a darn good team,” Minor said of Colony. “They made more plays than we did. That’s what it all boils down to.”

Colony entered the night showing it could put up gaudy offensive numbers.

It averaged 40.6 points per game this offseason.

But it was the Tartans who marched out on the field to the sound of bagpipes and flexed their muscles first.

Senior quarterback Jack Ruff orchestrated a 12-play opening drive where he found wide receiver Will Stahl on a 27-yard pass play. All that was left was for running back Benton Barlow to score on a 1-yard run.

Colony answered with a touchdown on its first play but the Tartans did not flinch.

The Tartans finally gained some momentum with a stop the defense desperately needed. After Ruff threw his second touchdown pass to Barlow, Colony was forced to punt after just three plays.

Ruff finished the game throwing 35-for-53 passes for 301 yards and five touchdowns.

All season Colony’s offense has leaned on the trio of running backs Bryce Strong and Jamari Johnson and quarterback A.J. Jones.

Throughout the second quarter, it showed why.

English added one more touchdown reception with 10 seconds left in the first half to give Colony its first lead of the game.

“They just kept running the ball and made big plays,” Stahl said. “They had more good plays than us tonight.”

St. Margaret’s just had no answer.

“We didn’t come out in that second half with the pizazz we needed,” Minor said. “We kept trying to get a stop but we kept missing tackles.”

The Tartans finally put together a run to gain momentum in the final quarter when Stahl and Hicks caught their second touchdown passes but that was as close as they would get.

One final drive with less than two minutes remaining came up short as Colony’s celebration began.

“We left it all out there,” Stall said, tears running down his cheeks. “That’s why it hurts so much.”

Stahl finished with 12 catches for 131 yards and a pair of touchdowns and concluded his senior season with more than 1,100 receiving yards.

St. Margaret’s now looks toward a new chapter next season when it joins the Orange Coast Conference with teams such as Orange, Santa Ana, Calvary Chapel and Costa Mesa.

“We weren’t supposed to be here, Minor said. “The battle, the fight, the sportsmanship, the hard work, the dedication. Listen, I’m so proud of this team.”