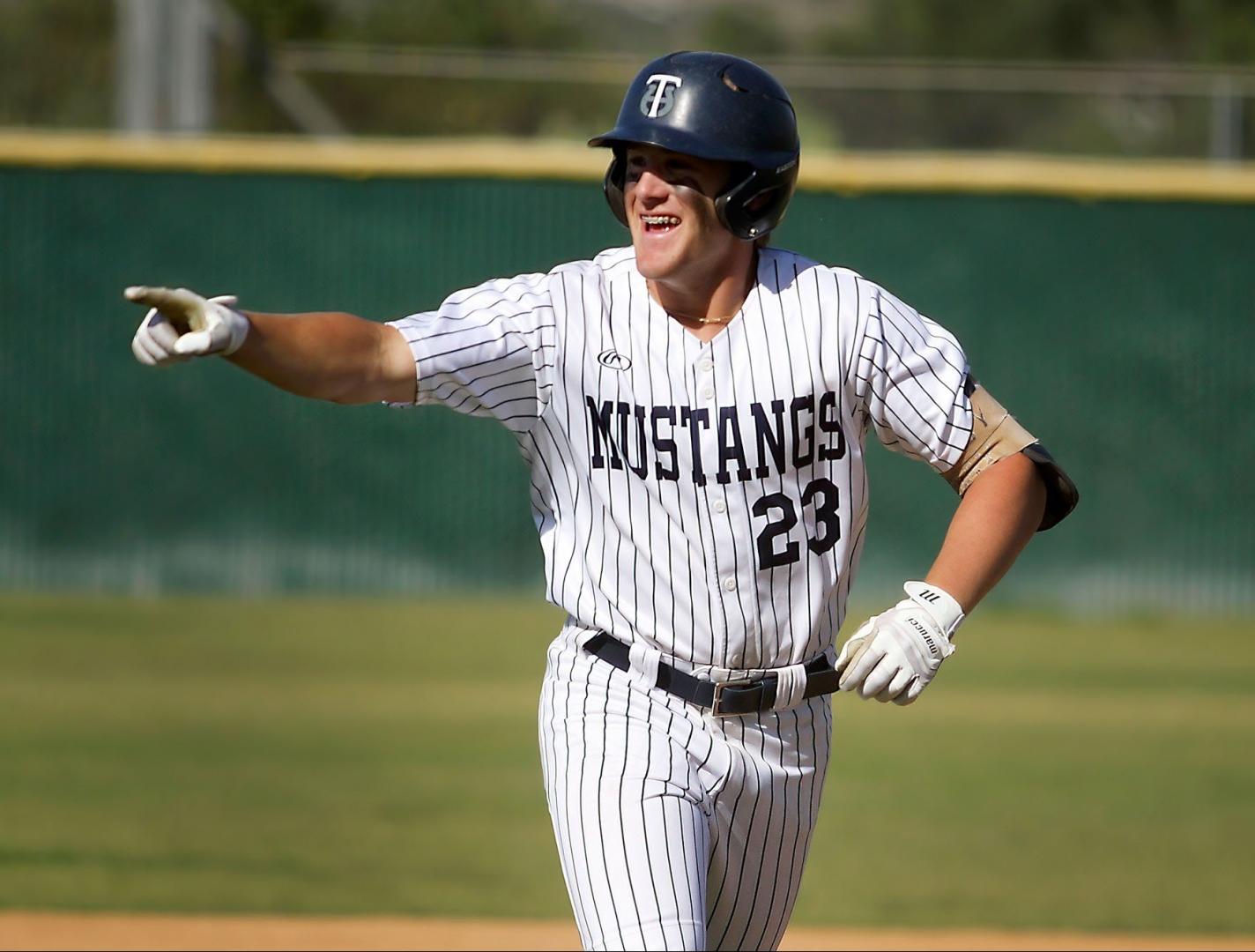 Trabuco Hills junior third baseman Bobby Gray points at his teammates i the dugout after hitting a home runagainst San Juan HIlls in Mission Viejo, Friday, March 18, 2022. Gray finished the game with the home run, a duoble and 5 RBIs as the Mustangs won, 8-1. (Ryan Kuhn, SOCoPrepSports.com)

MISSION VIEJO — The Trabuco Hills baseball team has shown it can hit the ball all season.

The Mustangs are averaging just over seven runs per game.

So it’s not surprising someone like their third baseman Bobby Gray would step into the spotlight.

Gray finished with a home run, a double and drove in 5 RBIs as Trabuco Hills came away with a 8-1 win over San Juan Hills on Friday afternoon.

It was the second straight win over the Stallions in as many games.

“The Sea View League is tough so any win you can get really helps,” Mustangs coach Michael Burns said. “Anybody can beat anybody on a given day.”

Gray isn’t shy to the big stage. He and his twin brother, Joey, were members of the Santa Margarita team that went to the Little League World Series team in 2017.

His coach said nothing fazes him.

“Bobby was a sophomore last year and I am always tentative putting young guys in middle of the order, but it only took me about a month before I realized he and Joey are darn good hitters,” Michael Burns said.

When the third inning arrived, Bobby came up the plate and belted a 2-run home run over the left field wall.

“I haven’t been hitting that well this week so I wanted to just stay back,” Bobby Gray said. “I knew it was going to be an off-speed pitch so I saw one, sat back on it and took it for a ride.”

Bobby Gray continued his offensive production during the next inning after he watched Drew Barrett and Will Burns set the table with a pair of hits. All he had to do was line a double down the third base line and the Mustangs held a commanding 5-0 lead.

While Gray led the charge against the Stallions, he said it’s nice that he doesn’t feel pressure because Trabuco Hills’ offense is so deep.

“I know what I am capable of but these other guys are always here to help me as well,” Bobby Gray said.

Trabuco Hills’ offense was not the only thing turning heads. Senior starting pitcher Colin McDonald took the mound and threw five-plus quality innings. He finished giving up five hits and striking four batters while also managing to pitch out of jams in the first and third innings.

“Early on after a few adjustments I was able to use my fastball-slider combination to keep the hitters off balance,” McDonald said.

McDonald gave up his lone run on an infield groundout allowing Ryan Chadwick to score but that was all San Juan Hills could muster.

Trabuco Hills’ Gavin Madrid came in for the final 1.2 inning of relief and retired all four batters in order. When it was over, the Stallions gad left six runners in scoring position.

“This week was great,” McDonald said. “It really sets the tone and the momentum heading deeper into this season.”

The Mustangs will now take their 10-win season into next week where it faces Aliso Niguel.