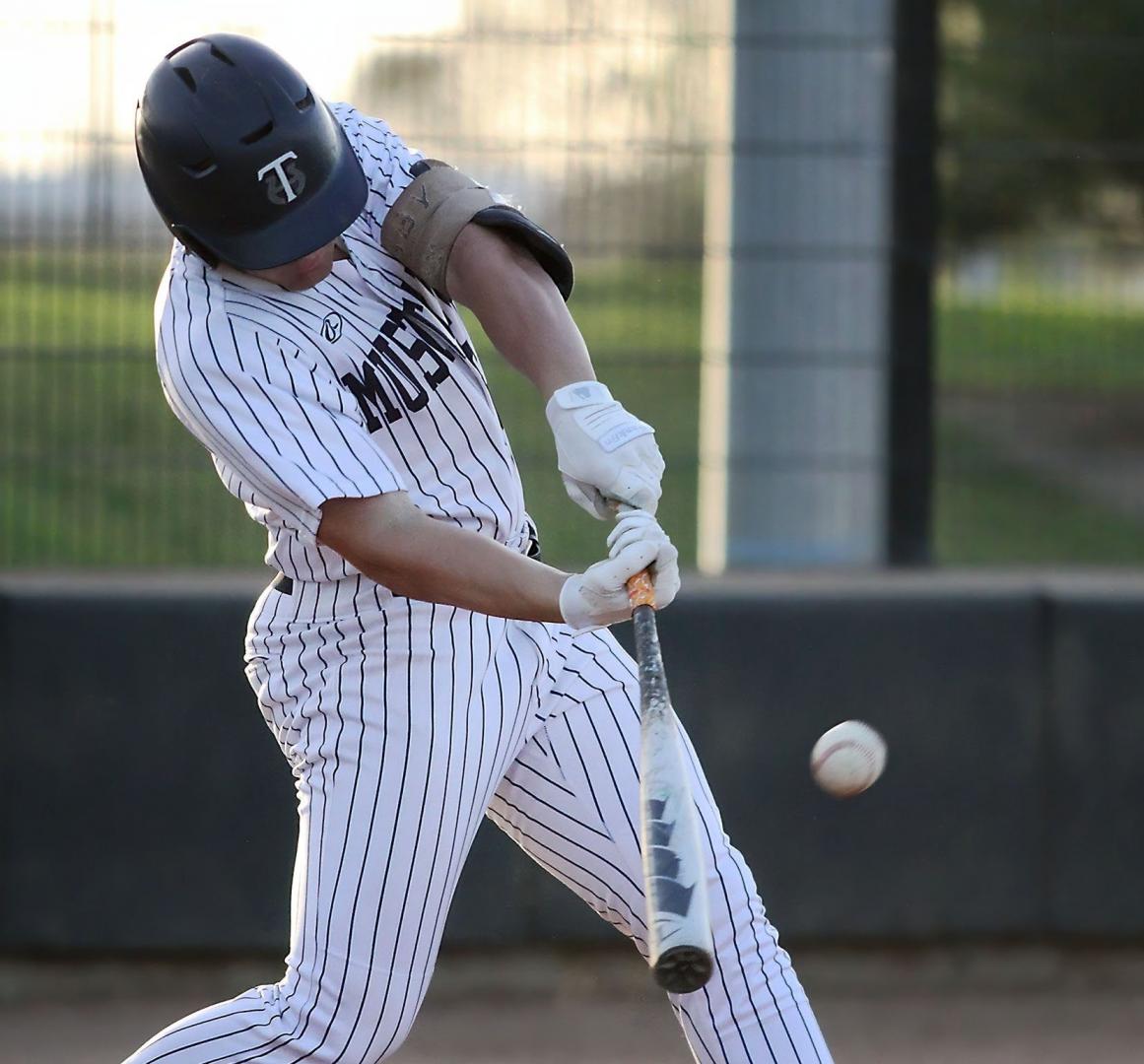 Trabuco Hills junior third baseman hits the ball during a high school baseball game at the Ryan Lemmon Invitational at the Great Park in Irvine, Turesday, April 5, 2022. Gray hit a 3-run home run in the sixth inning to give Trabuco Hills a 5-2 win over Newport Harbor. (Ryan Kuhn, SOCoPrepSports.com)

Esperanza beat the Mustangs in extra innings just one night ago.

Bobby Gray made sure that wouldn’t happen again.

The Trabuco Hills junior baseman belted a mammoth 3-run home run in the bottom of the sixth inning on Tuesday against Newport Harbor.

The home run that landed just over the 367 feet sign in left field was the difference in the Mustangs’ 5-2 win.

“Bobby…he’s such a good hitter. He’s such a good kid. He is so deserving of this,” Trabuco Hills coach Michael Burns said. “He does a great job making adjustments during his at-bat.”

It didn’t take long for Newport Harbor to jump out in front when outfielder Bryce Blaser tripled in the right center field gap. One batter later Troy Christensen drove him home on a sacrifice fly.

Gray stepped up to the plate during his first at-bat and answered by doubling to center field.

However, the Mustangs couldn’t get his run across.

Senior pitcher A.J. Guitron-Moore struck out Gray’s twin brother, Joey, that helped sit down 12 of the next 14 batters.

Guitron-Moore’s only blemishes were singles to Nick Perez and Trevor Kazahaya that were stranded on base in the second inning.

Pitcher Tyler Byrnes matched Guitron-Moore and following the sacrifice fly, he retired 13 batters in a row, striking out six in the process.

Burns said while Byrnes was rolling, he was on a pitch count limit since he came in and threw 60 pitches on Friday and wanted to save him for their Sea View League games on Tuesday and Wednesday against Aliso Niguel.

“We see the bigger picture and league is more important,” Burns said. “We want him to be 100 percent.”

Robert Read came in during the sixth inning and allowed a run, but Gray’s home run quickly turned things around.

I knew my first two at-bats that I hit curve ball, so I was thinking that they weren’t going to throw me another curve ball and it was a fastball middle in,” Gray said. “ I just saw it.”

Gray has been a power threat in the Mustangs lineup all season batting well above .300 with eight home runs and 24 RBIs and after he got back two the dug out it wasn’t long before his home run sparked his teammates.

Tyler Collins and Nick Perez came to the plate and also drove in runs and the Mustangs celebrated their comeback from behind victory.

“This is going to boost our confidence, for sure,” Gray said. “I’m excited for that.”

Trabuco Hills returns to Sea View League play on Tuesday when it hosts Aliso Niguel. The Mustangs also has a half-game lead on San Clemente atop the Sea View League standings.