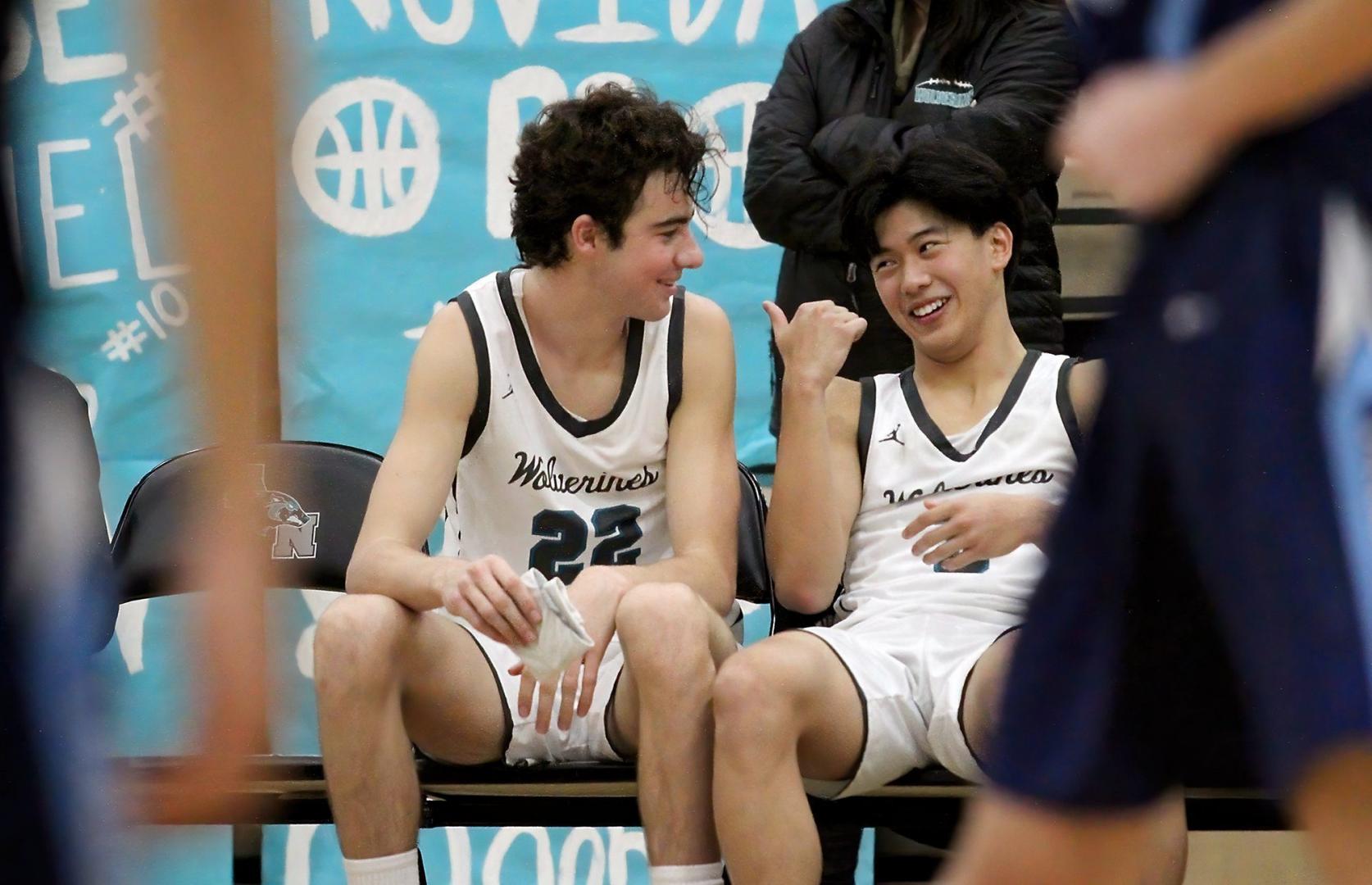 Aliso Niguel senior forward Tyler Weaver (22) and senior guard Brandon Novida (3) joke on the sidelines during a high school basketball game against University in Aliso Viejo, Jan. 5, 2022. Weaver and Novida have shown great on-court chemistry this season and finished the game with a combined 44 points as the Wolverines won 72-46. (Ryan Kuhn, SOCoPrepSports.com)

ALISO VIEJO — Wednesday night’s game against University was just another day on the court for Aliso Niguel seniors Brandon Novida and Tyler Weaver.

Novida perfectly timed a pass between his legs to a trailing Weaver.

“It’s a special bond,” Aliso Niguel coach Keith Barnett said of his players. “They have an interesting sense of where the other person is at all times.”

It wasn’t long before Aliso Niguel took firm control that blossomed into 72-46 victory. Together the pair combined for 44 points and eight 3-pointers.

“Not too often do you see the type of players these two are and their chemistry together,” Barnett said. “They benefit each other but also cater two the needs of their teammates.”

Novida and Weaver both started playing basketball around the time they attended kindergarten and met in elementary school.

Weaver said they didn’t talk much, but a friendship started to grow.

“All I remember is that he was tall,” Novida joked.

By the seventh grade, the two were inseparable on the court.

“When we step onto the court together and we just click,” Novida said. “Tyler is my wingman. We just connect.” 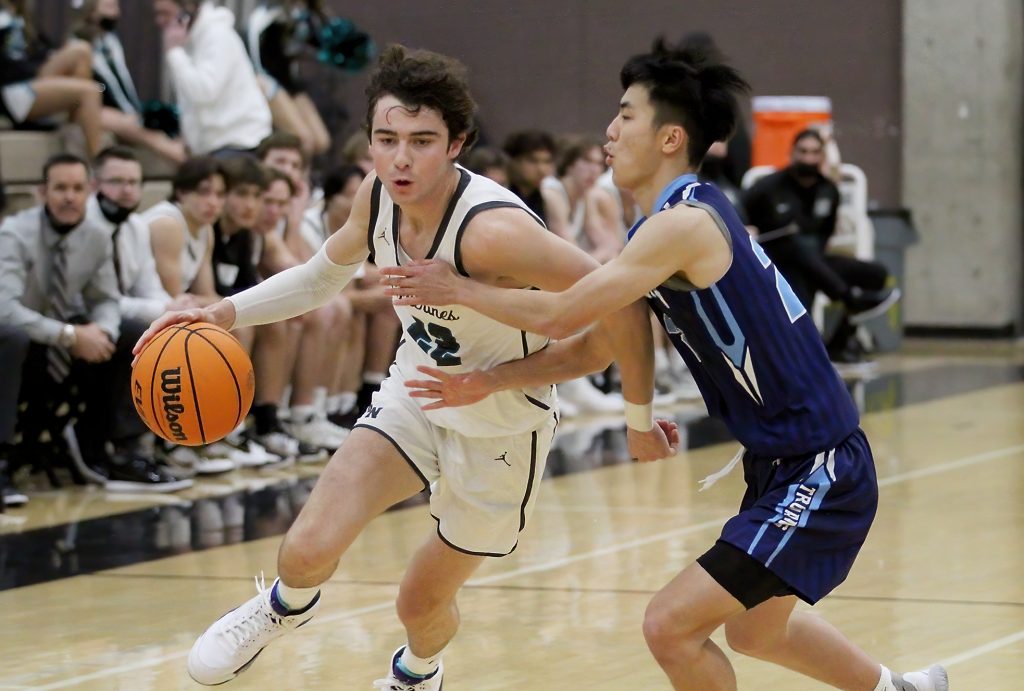 It wasn’t long before the two started hanging out outside school, but their favorite memories always came with a basketball. It didn’t matter if it was inside on the hardwood or outside on the blacktop.

“It’s just nice being able to be out there with a player such as talented as Brandon,” Weaver said. “When I can’t get it going, he is always there and takes the load off of my back.”

Even though Weaver found his shot early against University, Novida was right there to lend a hand.

Novida helped the Wolverines pull away from a slim first quarter lead and finished the half outscoring the Trojans 9-1 with three consecutive 3-pointers.

Weaver was right there to help celebrate a 38-20 halftime lead.

Not only do the pair connect on the offensive end but also defensively.

Both players know how much their team’s defensive scheme has contributed to a 15-4 season.

“We really bought into our defense and now are rolling,” Weaver said. “It’s about communication and letting our team know where we are at.”

But the offense didn’t disappear in the second half.

Weaver found his touch by scoring 14 of his 24 points in the third quarter. After he hit his second 3-pointer, the Wolverines were holding a 29-point lead.

Novida also scored on few layups, finished with 20 points and dished out some flashy no-look passes.

“They create a lot of excitement on this team but they also help everyone out,” Fromm said. “When I watch them, I want to learn that move or take that shot.” 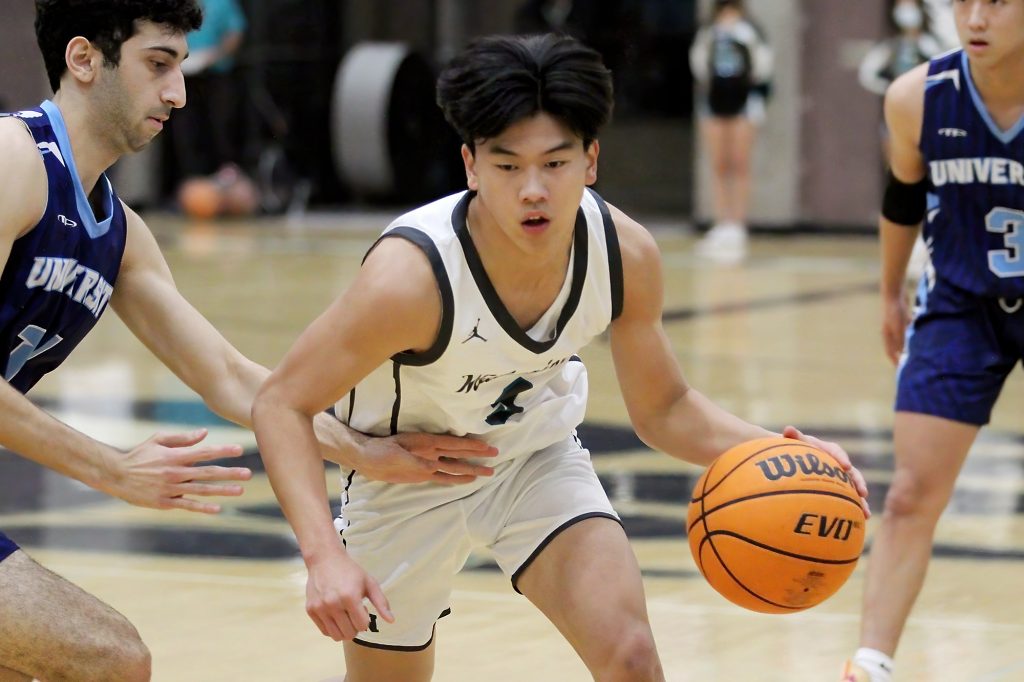 Both players were taken out in the fourth quarter after Aliso Niguel saw it’s lead increase to as many as 33 points. Now they could enjoy the final six minutes cheering their teammates on.

While the two friends have shared plenty of memories wearing teal and black. It won’t be long before they start their new journey playing college basketball. Weaver has an offer from UC Riverside but is still waiting to make a decision. Novida is talking to smaller schools such as Chapman.

But that’s in the future. They know there are seven regular season games remaining and fixated on another Sea View League title that starts with a game against San Juan Hills on Friday.

“I’m just enjoying coaching them right now,” Barnett said. “We will see how it goes.”