She enjoyed sitting with her friends, making memories and cheering Dana Hills High School on to victory.

While she took in the sights and sounds of the game and the homecoming festivities, something came over her.

She looks up at where she sat during that homecoming game.

She graduates in a few months but the legacy she leaves will last forever.

West is not only a member of the Dana Hills football team, she is the first girl to score a point in the school’s history when she made a PAT against Woodbridge last Friday.

STEPPING ONTO THE TEAM

Her family was more involved in soccer.

But the times she played flag football during middle school PE classes were fond memories.

“I didn’t think much of it at the time, but I would always be captain and pretty much play every position,” West said. “Quarterback, receiver. It was just really fun.”

Her life went on as a soccer player, eventually playing at Dana Hills as a midfielder.

Little did her soccer teammates know, West purchased a football the week after the homecoming game to see if she could kick a field goal.

“I just started coming down to the field during my own time after sixth period and started kicking,” she said.

Her friends watched her kick sail through the goal post from the 10 yard line and, soon enough, her friend, Noah Simpson, brought the news to his football coach, Curtis Madden.

“I told her to get her counselor to change her schedule, come to the weight room and start working out,” Madden said.  “Anytime you have someone that seeks you out and wants to join the team, that spirit is always welcome.”

But what would her parents think?

West is not the first girl to join a high school football team.

According to the National Federation of State High School Associations, 2,404 girls played 11-man tackle football on boys teams at the high school level.

That number has nearly doubled since the 2002 school year.

West is also not the first girl to join Dana Hills’ football team.

Joanlee Ortiz was on the roster for the 2019 season but never recorded any stats.

“We are so proud of her,” Leah’s mother, Alicia West said. “She sets her mind to things and just perseveres and goes after it.”

Leah’s father, Dean, jokes that she gets it from her mother, but her determination goes further than the gridiron. She said she takes it with her to the pitch and into the classroom as she fights to break gender stereotypes.

“I can’t imagine someone crushing your dream,” Leah West said. “I want to empower other women.” 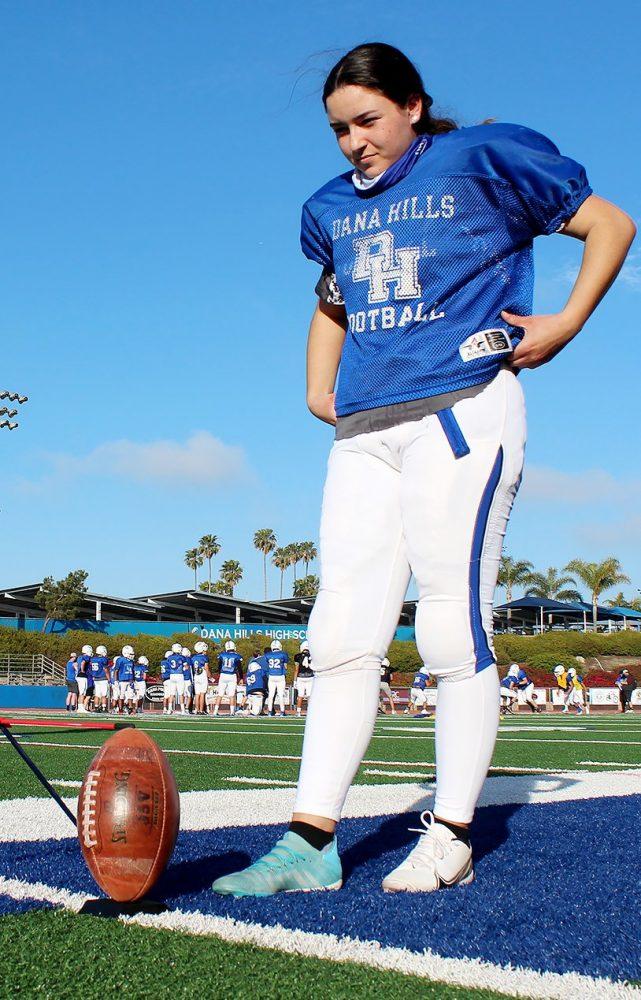 Dana Hills senior kicker Leah West prepares to kick the ball during a high school football practice at Dana Hills High School’s Dolphin Stadium. West made a PAT during last Friday’s game against Woodbridge, making her the first girl to score a point in the program’s history. (Ryan Kuhn, SOCoPrepSports.com)

And she is not doing it alone.

“As a female coming up in this sport, I think you have to step your game, but if you have the passion and drive, anything is possible,” St. Germain said.

West said that, while most of the people she has encountered have positive had a positive response, she ignores the ones who don’t. She likes the challenge and wants to make a positive change.

“I have always supported her, and now look at her. She is making field goals and everything,” senior running back Nicolas Intha said.

Another challenge West has experienced is mastering the art of kicking a football.

After all, a soccer ball and a football are quite different.

“When I kick a soccer ball, I really don’t have to think about it too much. I can kick the ball any way and it’ll go pretty far,” West said. “When I kick a football, I have to kick it with the exact part of my foot in the exact location every single time to get that trajectory that will make the ball go straight.”

Not only has she been watching YouTube videos from IMG Academy, but kicker teammate Kian Afrookhteh has also provided guidance.

“90 percent of kicking is mental,” Afrookhteh said. “You just have to maintain your composure, because once that mental side is damaged, it hurts the physical side.”

West set out and accomplished her goal.

Her parents watched their youngest daughter make history and, while they might be a little nervous, she assures them she will be fine.

“They are definitely more worried that I am,” West said. “I’d love to go out there and make a tackle. I don’t have a fear of getting hit.”

So, what’s next for West?

She will graduate, head off to a college and wants to hold onto football.

“I already made plans to practice a ton over the summer,” West said. “Even if a college team says I’m not ready, I will work my hardest and try the next year and the next year after that. I just don’t see myself stopping.”

And what about the opportunity to play another position?

“Imagine that final game in the fourth quarter,” she said. “Catching the ball like that would be fun.”

No matter what happens, West is happy with what she has accomplished at Dana Hills.

This season almost didn’t happen because of the coronavirus pandemic, so she makes sure to live in the moment.

She has a rich support system at school with her teammates, friends and coaches.

She makes sure to hug her parents and always reminds them how much she loves them and their support to accomplish her dreams.