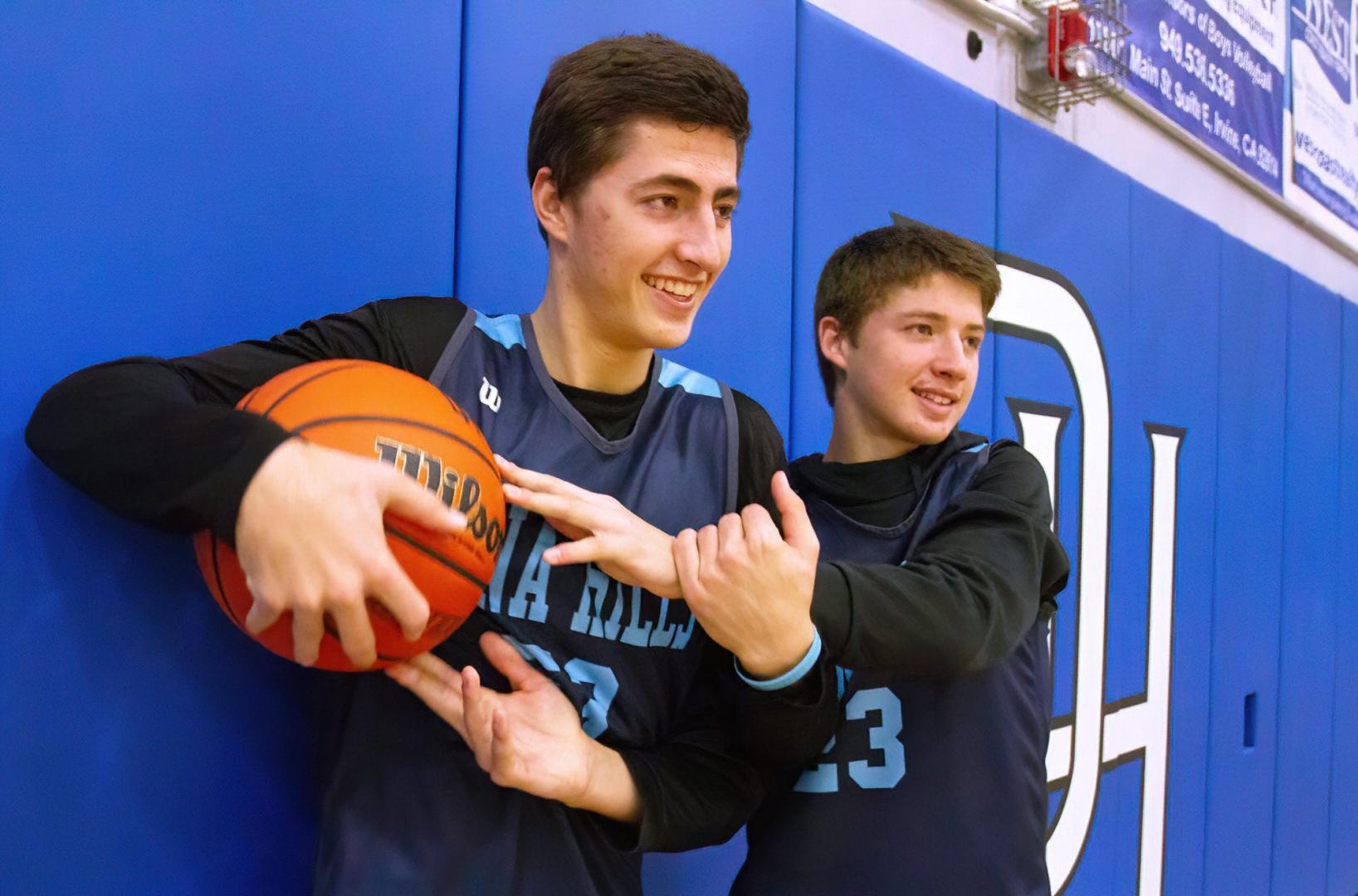 Dana Hills freshman point guard Collin Haugh tries to wrestle the ball away from his older brother, senior Griffin Haugh during a high school basketball practice in Dana Point, Dec. 16, 2021. This will be the only year the two brothers will play together in high school. (Ryan Kuhn, SOCoPrepSports.com)

Brotherly love: Dana Hills’ Griffin and Collin Haugh making the most of their only season together

The Haugh brothers are averaging a combined 32.8 points per game

DANA POINT — Griffin and Collin Haugh have always gone to the local park to play basketball.

Sometimes they just shoot around but their sibling rivalry usually culminates in a one-on-one game.

“Every time we play (my older brother) beats me, except for two years ago when I started winning,” said Collin, a freshman.

Griffin could do nothing but smile.

“It took him awhile,” he responded. “I take pride though because I taught him a little bit.”

The Haugh sibling rivalry might be ongoing on the blacktop but inside Dana Hills High School’s gymnasium, the brothers’ have been working together to create a memorable season.

The Dolphins are ranked among the top 25 teams in Orange County and feature an uptempo 3-point driven offense fueled by the Haugh brothers.

“This was kind of a unique situation having two brothers play and start on the same team, but I don’t think we’d be 11-4 right now without them,” Dana Hills coach Tom Desiano said.  “When you have two players that can shoot it like they can, it just makes this team a lot better.”

It didn’t take long for Griffin and Collin to find their love for basketball.

Their dad, John, played at Division II Arkansas- Monticello and their little tikes hoop saw plenty of use.

But the family gave them no pressure to stick with baseketball.

“I would have been happy with whatever sport they wanted to play,” John Haugh said. “They gravitated toward basketball and luckily it was pretty easy for me to teach them.”

Griffin and Collin started playing basketball when they were six years old on teams at the local Laguna Niguel YMCA.

Once they got older, Collin began to fill in for players at at Griffin’s level.

“He would be that extra player that I would make sure to give some minutes and it really helped him out a lot,” John Haugh said. “I wish I could have done that for Griff but really had the talent from a young age. He was just always n unselfish player, always wanting to get his teammates involved.”

Griffin’s unselfishness also helped Collin gain confidence and it wasn’t before long that the two bonded as one on the court.

“It’s just been great watching them,” John Haugh said. “We send videos to our family out of state and they all love the games. It’s been quite a treat.”

By the time the Griffin was about to enter high school, both players were playing in the Dana Hills basketball feeder system, “The Fins”. Desiano not only caught notice of Griffin but Collin too.

Much like he did when he was younger, Collin held his own against the older players including this past summer when he was on Griffin’s club team.

“It just really boosted his confidence knowing that was he was going to have to do in high school,” Desiano said of Collin. “He was immediately never shy nor fearful.”

Collin started the Dolphins’ season opener against Santa Ana Valley and was just one of three freshmen to start in Desiano’s 18 seasons as head coach.

“I usually don’t start freshmen players because they aren’t physically mature, don’t have the skillset, or are timid to start out, but with Collin it was different,” Desiano said. “Confidence is the one think he never lacks. He comes into the gym and thinks he is the best player out on the court. You kind of need that to go out and play.”

The Dolphins won their opening game over the Falcons and the two brothers relished in the 38-point victory. Before too long, Collin broke through with a career-high 19 points and five 3-pointers against Pasadena on Dec. 27.

“His shooting comes naturally but he’s increased his toughness,” Griffin said. “He’s had to body be his whole life.”

Griffin, like his younger brother, also had an early varsity basketball career.

He made the varsity team as a sophomore but came off the bench. Last spring during the COVID year, the Dolphins played just 11 games and Desiano decided to let him loose.

“He was our best offensive player,” Desiano said. “He could definitely put up points and realized what he could do. This year he has had some big games.”

But unlike his younger brother, Griffin was a lot more reserved, even quiet at times.

But that didn’t matter with 3-pointers flying from every direction.

“If he misses 10 shots or whatever, he will come back and shoot the 11th and 12th shots as if he is going to make it,” Desiano said. “He doesn’t dwell on a bad game.”

This is the final season Griffin and Collin Haugh will be able to play together.

Griffin will graduate in the spring. He doesn’t know where he will end up but holds a 4.6 GPA and hopes to continue to play basketball on the next level.

Collin will be handed the keys to the Dolphin basketball team. He will eventually step into a leadership role as Dana Hills looks to win its first league title in some time.

No matter what happens this season they won’t forget the memories together on the court.

“We want to win a league championship together,” Collin said.

He paused before continuing.

“And then I’ll get a few more when he leaves,” he smiled.