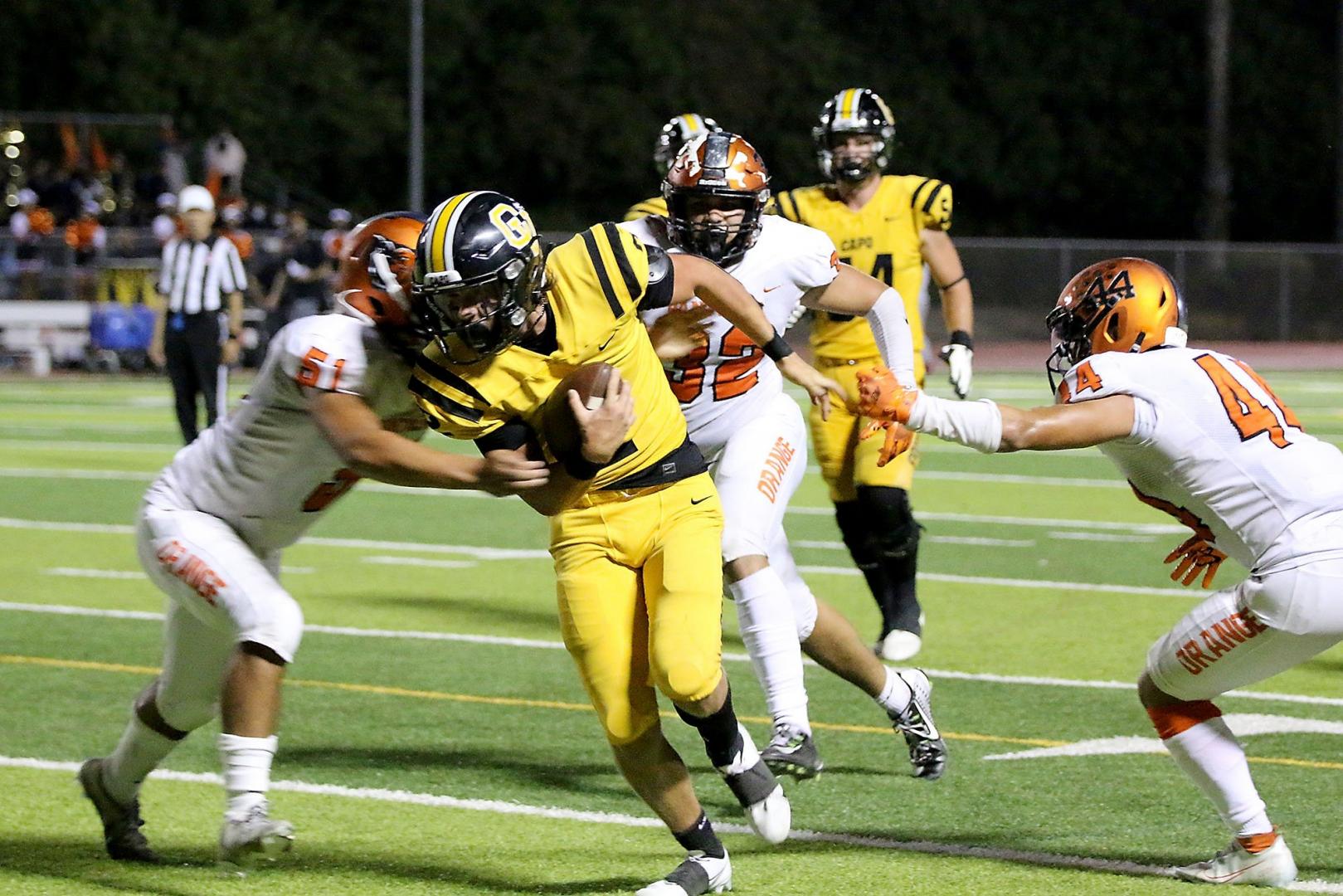 MISSON VIEJO — Capo Valley’s football team was caught in a back and forth offensive battle with Orange High School on Friday night only to come up a little short.

The Cougars lost the game 67-47 in front of their home fans on homecoming.

Capo came out of the gates, scoring the first touchdown of the game on a 27-yard touchdown pass between junior quarterback Trey Kukuk and wide receiver Owen Taylor in the first six minutes.

As the game went on, the Cougars were unable to keep up as they were outscored 25-14 in the first half.

Orange was also able to return an interception for 75 yards and completed another touchdown pass from Siskowic to cap off the first half.

“It’s never a lack of effort,” Capo Valley coach Sean Curtis said. “When you’re in a tight game with a good team the margin of error is so small.”

During the second half, the Panthers were able to exploit Capo Valley with their outside passing. They combined for three touchdowns of over 50 yards.

The Cougars, however refused to give up in this game.

After being down 26 points midway through the third quarter, Capo’s offense was able to keep the game within two possessions until the last couple plays.

Kukuk was able to use his ability of pocket awareness to save the Cougars in desperate situations. He not only threw for 318 yards and four touchdowns, he also put together a total of 97 rushing yards and two rushing touchdowns.

“I focus on getting the ball to our top receivers,” Kukuk said. “If I’m able to get the defense focused on our receivers then I can use my legs to help the offense.”

Curtis knows Kukuk is a dual threat, but also wants to prevent any injuries this early in the season.

“We do like to use his legs and let him run,” Curtis said. “It’s a long season and we want to protect him but every game has been tight so far.”

After the game Capo Valley’s players and coaches talked about the accountability that they hold for on another. As a team with upperclassmen leadership, they said the role of leading falls on everyone.

“We always say our family versus your team,” Curtis said. “As a school we have some good players, but we have to learn how to play as a team to bet high quality programs.”

Moving on from Friday’s loss, the Cougars will go on to face Cypress who has already defeated San Juan Hills earlier this season.

“We didn’t play smooth in the first half tonight,” Kukuk said. “Going into Cypress, we just need to keep this momentum that we had tonight on offense.”