Kukuk has accumulated 2,837 passing yards and 29 touchdowns in his first year as starting quarterback. 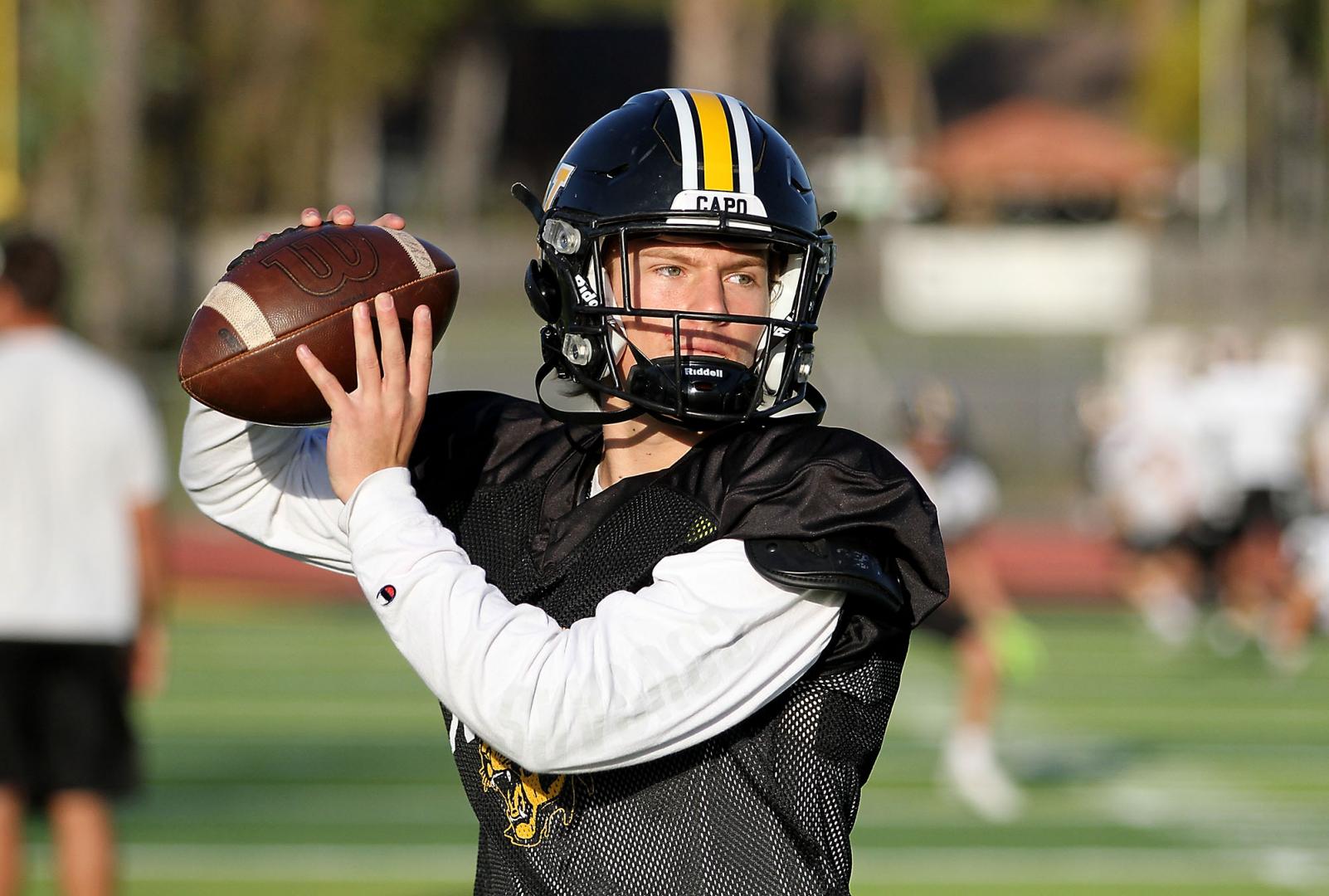 Capo Valley quarterback Trey Kukuk steps back to pass during a high school football practice in Mission Viejo, Oct. 26, 2021. Kukuk set the Orange County record for most passing yards in a game this past Friday against Trabuco HIlls. (Ryan Kuhn, SOCoPrepSports.com)

MISSION VIEJO — Capo Valley quarterback Trey Kukuk walked into practice with a smile on his face.

As well he should.

It hadn’t even been a week since he etched his name in the Orange County record books.

Kukuk, a junior, threw for 615 yards and six touchdowns in the Cougars’ shootout win over Trabuco Hills this past Friday.

Kukuk had finished with 613 yards originally, but coaches reviewed the film the next morning and found he did indeed break the record for most passing yards in a single game that was set by El Toro’s Conor Manning in 2012.

“It felt amazing,” Kukuk said, when he got the call from his coach. “It was such a surreal moment.”

As Kukuk looks back on his accomplishment, he credits this past summer to his success.

“The 7-on-7 passing tournaments were a big factor in my development,” Kukuk said. “You get to create chemistry with the wide receivers and getting a bunch of reps at quarterback.”

These Orange County 7-on-7 passing tournaments such as the ones hosted by Mission Viejo and Edison high schools feature programs such as Mater Dei, St. John Bosco, Servite, Long Beach Poly and others.

“The philosophy I have is to try and find the best competition you could possibly go against,” Capo Valley coach Sean Curtis said. “If you walk away with a win over these big programs, now you have some confidence. We felt like we got better and food some things to work on.”

Kukuk transitioned to quarterback from the linebacker position this past offseason when Dartanyon Moussiaux graduated.

And it didn’t take long to find his stride.

He threw 383 yards in his first start against Tustin in the season opener.

“I think the word is out that we can develop quarterbacks,” Curtis joked on Friday. “We know we can play catch with anybody.

Capo Valley created its identity as a passing team this past spring when Moussiaux averaged 350.8 passing yards per game.

“Our hope was to be a little more balanced with so Trey could be more comfortable back there but he has proven he can handle a big work load in the passing game,” Curtis said.

That’s not to say he didn’t have to improve on some things.

The biggest hurdle Kukuk said he has had to overcome was his “happy feet.”

“I relied on my legs a lot in the beginning of the year,” Kukuk said. “It works a lot better to get the ball in the hands of my playmakers and scramble when it’s absolutely needed.”

“For us to be a team that is going to go are in the playoffs and win championships we have to be able to run the ball,” Curtis said.  “The passing game is not always going to be there.”

For now, Capo Valley’s air raid offense is proving to be successful and certainly has everyone buzzing.

“It’s a pretty cool legacy to leave behind,” Kukuk said. “I guess you could say it puts some pressure next year but I’m not too worried about stats.”

The Cougars will face Aliso Niguel in their regular season finale on Friday. A win would put place them in second place in the Sea View League. However, if Capo Valley wins and El Toro loses to Trabuco HIlls, all three teams would tie for first place.