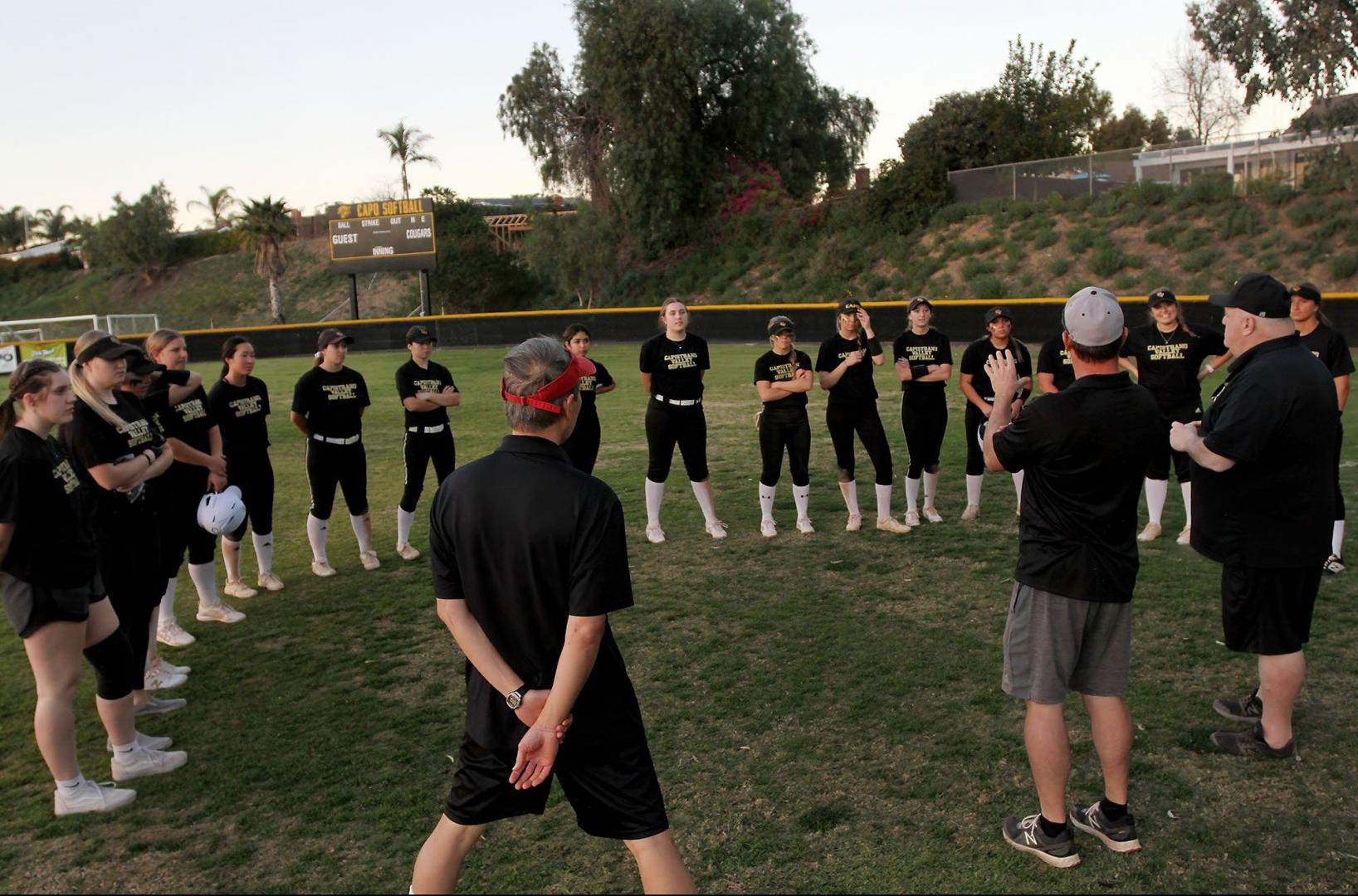 The Capo Valley softball team meets with its coaches after an exhibition game against El Modena in Mission Viejo, Monday, Feb. 7, 2022. The Cougars are looking to defend their Sea View League title this season. (Ryan Kuhn, SOCoPrepSports.com)

They just lost in the quarterfinal of the CIF-Southern Section Division 5 playoffs but their sadness turned into pride knowing it turned its season around.

Just three years prior, the Cougars finished with one win.

Now, as a new season approaches,Capo Valley has set new goals especially after receiving news that is was moving up to Division III.

“We are going to be playing better competition this year,” coach Art Cole said. “We had a bad last game and we regret that we didn’t play better defense.”

Defense is a sense of pride and will be a focus for the Cougars after committing 51 errors last season.

“You look at the five games we lost last year and in all five we made more errors than we should have,” Cole said. “Defense is so important at this level. We can execute and score more runs but you can’t fix errors.”

First baseman Natalie Mugnai, one of three seniors on the roster, said it will be important to have the correct headspace.

“The seniors have come together trying to make a more positive environment,” Mungai said. “When we do get an error it’s I’ll get the next one.”

Munagi is just one of 14 players returning from last season’s team that includes its top two hitters in Quinn Southerland and Kate Verhoef.

Both Southerland and Verhoef batted well above .400 and led the team with a combined 63 hits.

Capo Valley’s offense only featured five total home runs last year but Mungi showed she can provide some pop after hitting a grand slam during an exhibition game against El Modena a week ago.

“Everything is always a combined effort but I pride myself on being a power hitter,” Mungai said. “I’ve had to change my swing a couple of times and now I found one that really works.”

The Cougars also have their rotation set with sophomore Madi McDonnell and junior Jasmine Estrada.

McDonnell appeared in all but one game last year and finished with a 1.74 ERA and just 13 walks over 104 innings.

“It was crazy going up against seniors and (college) committed girls, but I loved it,” McDonnell said of last season. “Leadoff batters were a big challenge especially trying to strike them off to start a game.”

While she said her drop curve, change up and screw ball helped her put together a successful season, she still wants to develop a rise ball to improve her strikeout numbers. She finished with just 53 total strikeouts.

“The most important thing is to just keep getting better and grow from here,” Cole said. “We have to win on and off the field.”