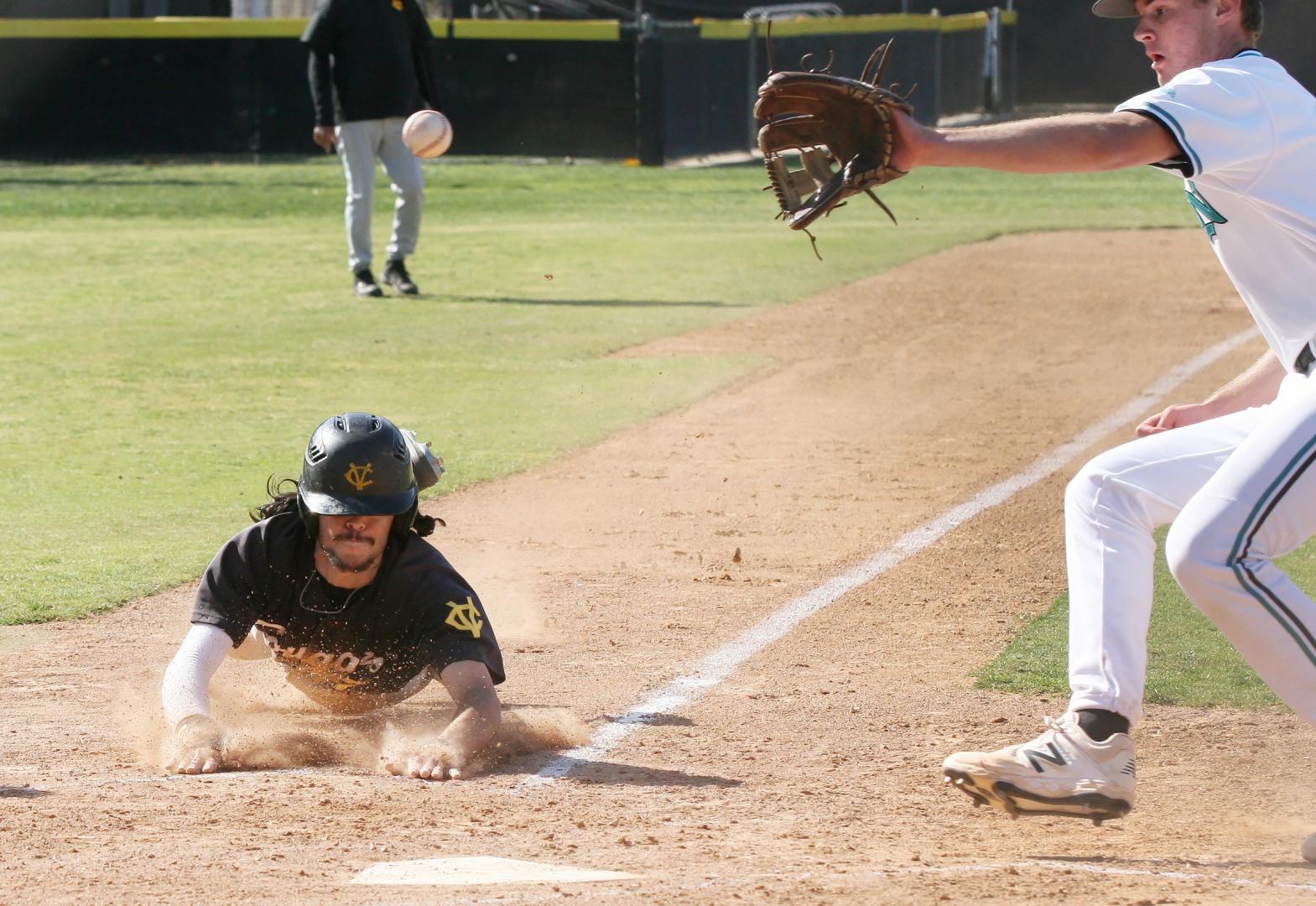 ALISO VIEJO — Capo Valley’s might be a young varsity team, but coach Adam Sorgi said his player’s baseball I.Q makes up for that.

Salas finished with a single, 3 RBIs and two runs scored but his wherewithal to score on a wild pitch kickstarted the offense during a 6-1 victory over Aliso Niguel on Tuesday afternoon.

“He was the spark plug that made us go,” Sorgi said of Salas. “He’s been putting in the hard work and this win is definitely on his shoulders.”

The offense for both teams started pretty quiet.

Aliso Niguel senior pitcher Connor Hayden struck out five batters over the first two innings until he loaded the bases in the third inning when Ruben Lopez singled to left field.

During the next at-bat, a wild pitch brought a diving Salas home.

“I always try to be aggressive on the base paths,” Salas said. “At the plate, I try to be a little more patient.”

Salas’ patience paid off later in the fourth inning when he drove a line drive up the middle, scoring two more runs. Two batters later, third baseman Matthew Dobson singled to give the Cougars a 4-0 lead.

“Obviously there are some things I could have done better with my pitching,” Hayden said. “There were some pitches that I knew I should have made.”

Despite giving up the four runs over 3.1 innings, Hayden finished his first start of the year with seven strike outs.

“After not having much of a junior season (because of the pandemic), it feels like I’m getting a redo,” Hayden said.

Capo Valley started pitcher Mason McGwire and while he pitched four perfect frames, he was taken out as a precaution because of some shoulder soreness.

Masen McDonnell came in and pitched almost three innings of relief, allowing just one run to score on a wild pitch in the third inning.

Junior Oscar Samaniego finished the final three innings in his very first varsity start. His only blemishes were a single to Chase Christner to open the fifth inning and a walk to James Ruelos in the sixth inning.

Samaniego also watched his teammates extend the lead in the seventh inning when Jackson Wear was walked home and Salas scored Jaden Sekhon on a sacrifice fly.

”It really was a team win today,” Sorgi said.

The Wolverines finished with just three hits and with a pair of road games against Laguna Beach and Segerstom to get into next week, the players know exactly what to improve on.

“I felt like we were really competitive, the game just got away from us,” Hayden said. “We just need to work on our hitting to get the offense back up.”

As for Capo Valley, it travels to Santa Margarita on Thursday before returning home on Saturday to face Canyon.

“We are young, but we are gritty,” Sorgi said. “I think Santa Margarita will give us a good idea of where we are at.”