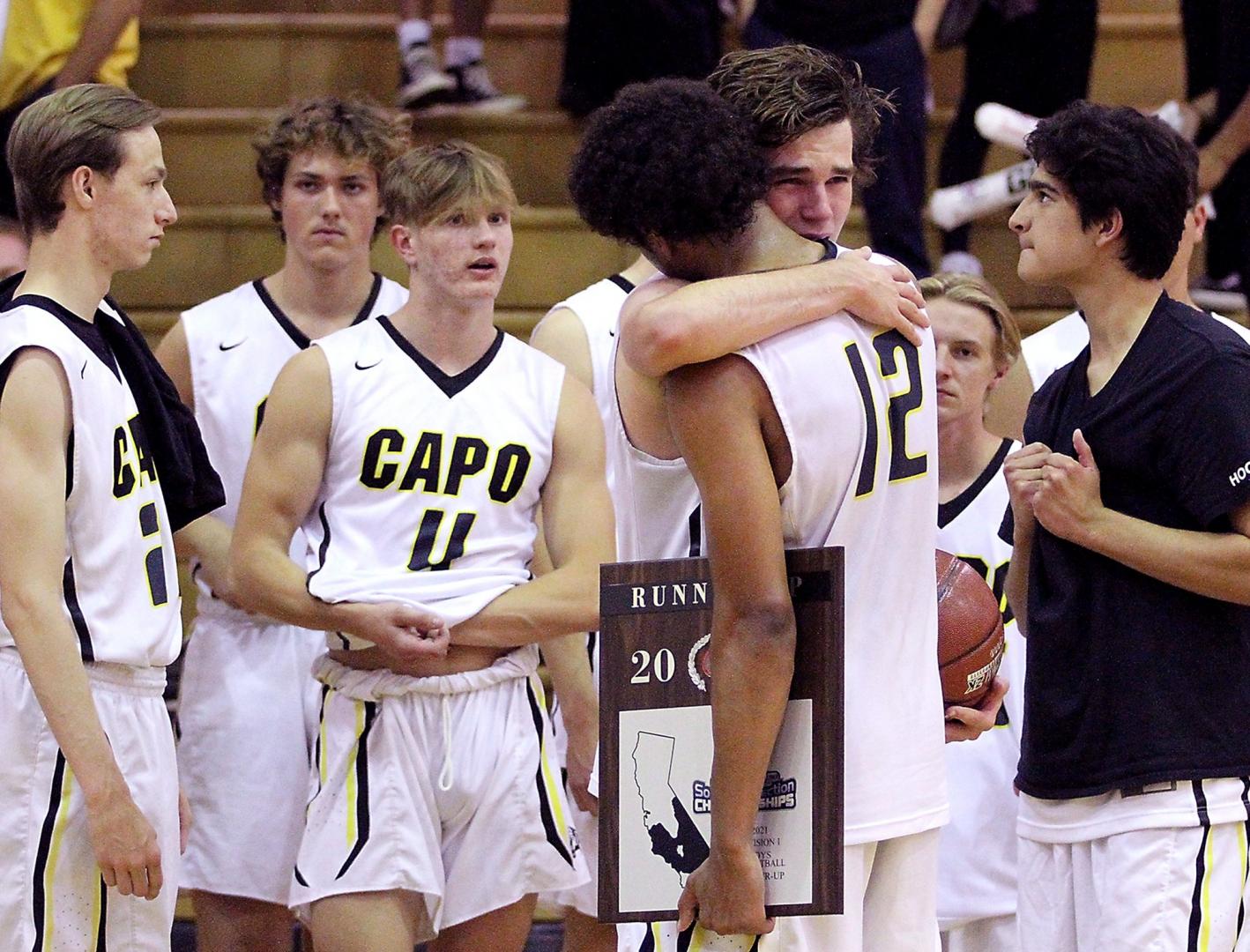 Members of the Capo Valley boys basketball team react to a loss to Chaminade in the CIF-Southern Section Division I Boys Baksetball Championship. The Cougars lost the game 53-49. (Ryan Kuhn, SOCoPrepSpots.com)

MISSION VIEJO — At the start of the playoffs, Capo Valley coach Brian Mulligan said his team needed to play perfect to win the whole thing.

Up until the final two minutes of the championship game against Chaminade.

“That one got away from us,” Mulligan said. “We made some uncharacteristic turnovers and they capitalized on them.”

Capo Valley just watched as the Eagles celebrated a 53-49 win.

“It hurts pretty bad but I’m extremely proud of all these guys I played with,” Cougars senior guard Landon Li said. “I’m just thankful to be a part of this team.”

Chaminade entered the night ranked No. 6 in all of California. Its point guard, Kenneth (K.J.) Simpson Jr., is headed to Division I Colorado next year.

But the Cougars played their game.

The only problem was that Chaminade answered with some 3-pointers of their own. Three shots later, both teams were tied 13-13 after the first quarter.

Capo Valley extended their lead in the second quarter, but every time it put together a run, Chaminade answered.

Finally, Gavin O’Neill hit a 3-pointer from the wing and the Cougars held a 27-24 halftime lead.

Chaminade regained its composure in the second half as Simpson got some help in the form of Coltrane Marchand and Colin Weems.

The Eagles put together a 6-0 run with Marchand hitting a 3-pointer from the corner and Weems came up with a steal and a fast break layup.

The Cougars’ advantage dwindled and both teams were tied entering the fourth quarter.

Simpson signed to play for Division I Colorado next season.

But in his final quarter with Chaminade, he made a statement.

The senior guard scored 15 of his 26 points in the fourth quarter.

A costly turnover by Capo Valley led to a go-ahead 3-pointer by Weems with 1:09 remaining.

The Cougars answered when Aiden O-Neill hit a 3-pointer of his own with 20 seconds remaining to bring the deficit down to two points but coming out of a timeout, Langston Redfield was unable to get a steal and Simpson went the length of the court for a layup and the ultimately the championship.

The two brothers transferred from Saddleback Valley Christian this past season and even though they didn’t win a CIF-SS championship, they found a new family.

Capo Valley will now advance to the CIF Southern California Regionals that begin next week. The brackets will be released this weekend.