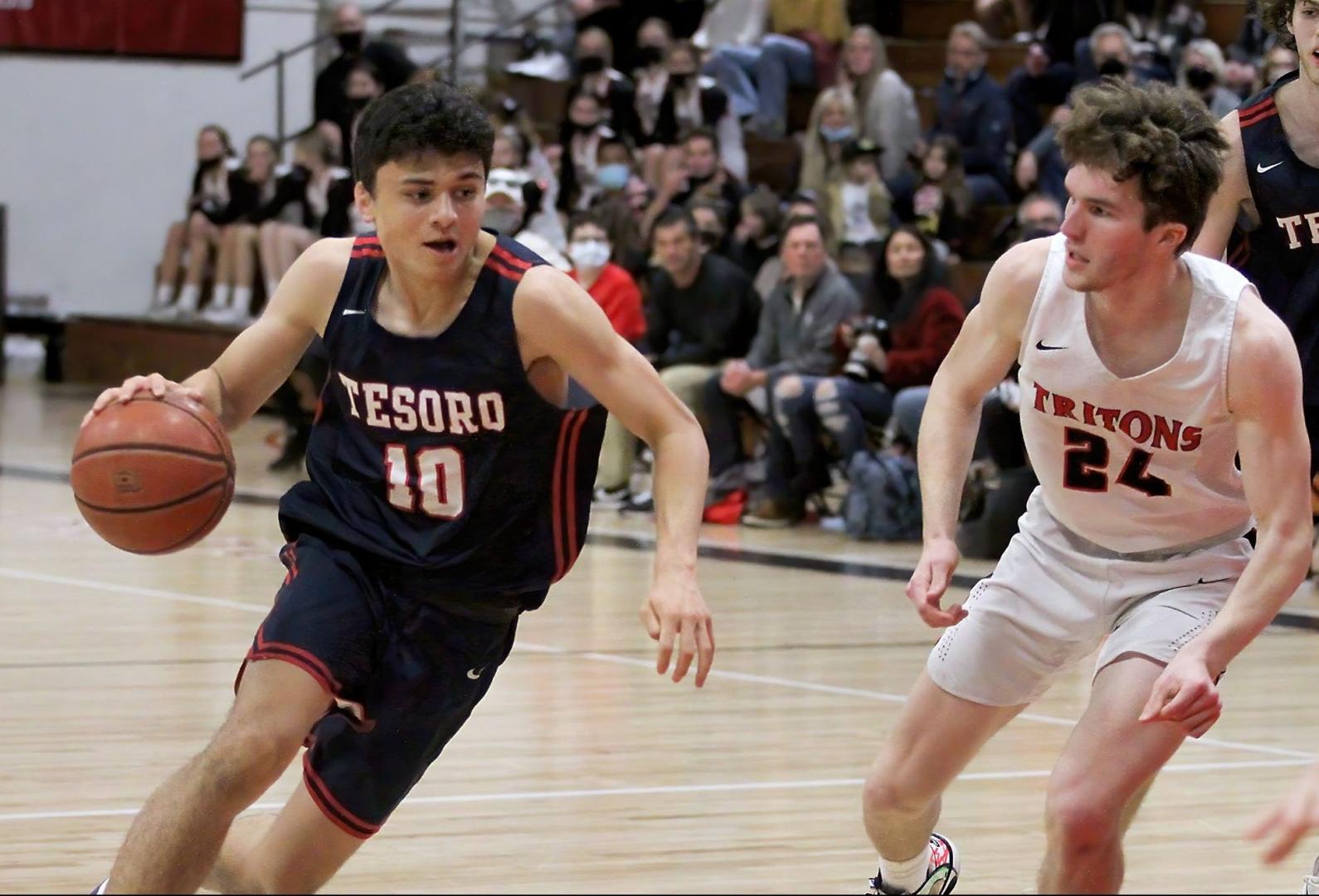 SAN CLEMENTE — Anything that’s of great work takes a lot of struggle.

He just watched his team celebrate the South Coast League title, but it took an extra four minutes.

That was until junior guard Carson Brown pulled up snd hit a 3-pointer with 10 seconds left in overtime to secure a 61-59 victory over San Clemente.

“That’s the way to win a league title right there,” Garrett said with a smile. “I told them they needed to play 32 minutes, focused and together but I guess we needed a little longer. I love these guys.”

The Titans came in facing some adversity, losing two out of its last three games including an 18-point loss to Capo Valley.

But all they needed was a win to secure league.

San Clemente started the game rather quickly but the Titans rallied.

Junior Blake Manning hit a 3-pointer that was part of a 7-0 run to close the half at the game was tied 11-11 after the first quarter.

Neither team strayed too far as both answered the other’s offense.

San Clemente finally gained some distance after Alec Grace hit a 3-pointer followed by Asher Gardiner muscling his way inside, but the Titans responded again when junior Jake Bennett hit a 3-pointer just before halftime.

The Tritons held onto a 26-24 advantage.

“We knew we had to keep our heads up and push forward,” Brown said. “We couldn’t get down.”

Tesoro had opportunities to take the lead throughout the second half but the offense could not find its stride.

Junior guard Nathan Draper hit a 3-pointer but the Titans watched as senior Charlie Spaeth respond with a pair of 3-pointers on the other end.

San Clemente held its lead throughout the third quarter, but the momentum eventually shifted.

Tesoro scored its first three baskets of the fourth quarter and consecutive three-point plays put them in control with a 50-43 lead with less than four minutes remaining.

San Clemente had other plans.

The Tritons battled back down seven points with two minutes left. Gardiner completed a three-point play to bring his team within a score and they were able to tie the game with 24 seconds left when Tanner Mehrens scored on a steal.

San Clemente even had a chance to win the game after Tesoro turned the ball over again with four seconds left but Easton Cattich’s shot fell short.

“We knew we just had to calm down,” said Bennett, who finished with 14 points. “You can’t have your nerves get the best of you.”

Both teams exchanged the lead in the overtime period on nearly every possession.

Mehrens would muscle inside with a score and Brown would draw a foul and make the free throws on the other end.

The same exchange happened in the final minute when Mehrens scored inside but Brown sealed the game with a pull-up 3-pointer at the top of the key.

He finished with 13 points, 11 of which came in the fourth quarter or later.

“I knew I had to get a shot off, I did a hard drop step and I was just happy it went in,” Brown said. “This team has grit.”

San Clemente tried to answer with their final possession but another last second shot missed its mark.

Tesoro was celebrating but the Tritons know a postseason opportunity is still available still sitting second in league.

“We showed how hard we can fight and it will help us in the playoffs,” said Gardiner, who finished with 17 points. “We use this loss as motivation.”

Tesoro now returns home to celebrate its lone senior Isiah Viajar on Tuesday night against Trabuco Hills while San Clemente will look to rebound as they travel to Capo Valley.