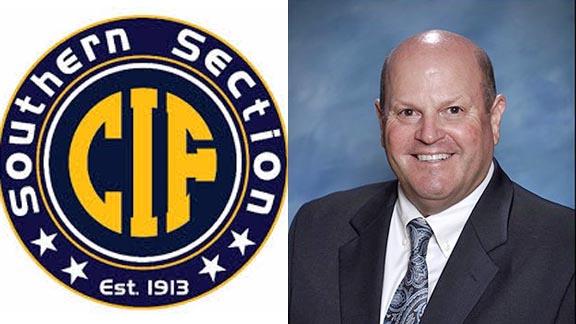 The CIF Southern Section cancelled its fall sports championships in response to the coronavirus pandemic on Tuesday, but during a press conference on Tuesday afternoon, commissioner Rob Wigod wanted the public to know that the guidelines put in place were implemented by the California Department of Public Health and he is doing what he can to bring high school sports back to Southern California.

“Like all of you, I am extremely frustrated by what I have seen,” Wigod said. “If anyone believes for one second that the CIF Southern Section doesn’t want student-athletes go there participating in school-based athletics, they are 100 percent wrong.

Now he asks the state for an opportunity to prove students would be safe playing sports.

“Give us a chance,” Wigod said. “We have told the governor’s office, we have told the California Department of Public Health, we suggested a road map in October that we believe that was workable from health professionals.”

“We are going to do what we can to continue to try to move high school sports forward,” Wigod said.

Even if that means cancelling fall postseason opportunities.

Wigod explained that the CIF Southern Section’s decision to cancel the fall sports championships will give more time to the schools to have a season of some type.

“The only dates that are applicable now are the end-of-season dates,” Wigod said.

The earliest date a fall sport will end is for girls volleyball and boys and girls water polo on March 20, but other sports, such as football, have been pushed back to as late as April 17.

“This means if a school can’t start water polo until March 2 and they want to play until March 20, they can play during that time,” Wigod said. “It will now revert to our school and they will have the ability to do what they can in the time remaining for them as long as the guidelines are available to them. Hopefully they can use that time for their benefit.”

While most schools wait patiently for the state to lift restrictions, some high schools have decided to move forward with sports despite the restrictions.

Four high schools in the CIF-SS area including Orange County schools Capistrano Valley Christian and Calvary Chapel of Santa Ana participated in a game this past weekend.

The CIF-SS released a statement saying that any school determined to have participated in or to be conducting interscholastic athletic events in violation of the State’s orders or CIF rules may be subject to CIF Article 22 sanctions including, but not limited to, fines, suspension or dismissal from membership.

Wigod said he has spoken to the administrations of each school and continues to get all the information needed to go forward.

Capistrano Valley Christian Athletic Director Eric Preszler was contacted but declined to comment about the game or the investigation.

Governor Gavin Newsom still has a stay-at-home order in effect for all of Southern California that was announced on Dec. 3. No high school sports would be able to start until the order is lifted.

“We are trying to work with the state about a return to play that can be done in a healthy and safe matter,” Wigod said.

The CIF placed the pandemic into four tiers – widespread (purple), substantial (red), moderate (orange) and minimal (yellow). If high school sports are unable to return, there has been talks of more club sports emerging but they cannot be affiliated with any high schools, logos, facilities or equipment.

“We are following the same guidelines that all sports should be following,” Wigod said.

But he urges everyone to have hope.

“I don’t lie to anybody and I haven’t lied to our student-athletes,” Wigod said. “There are some people to just say it’s all over, but I don’t believe that it is. There is still time for our fall sports and our spring sports, so hopefully we will see the improvement necessary to start.”

CIF-SS cancels Fall Sports Championships, no changes to regular season
An Engineer on & off the field