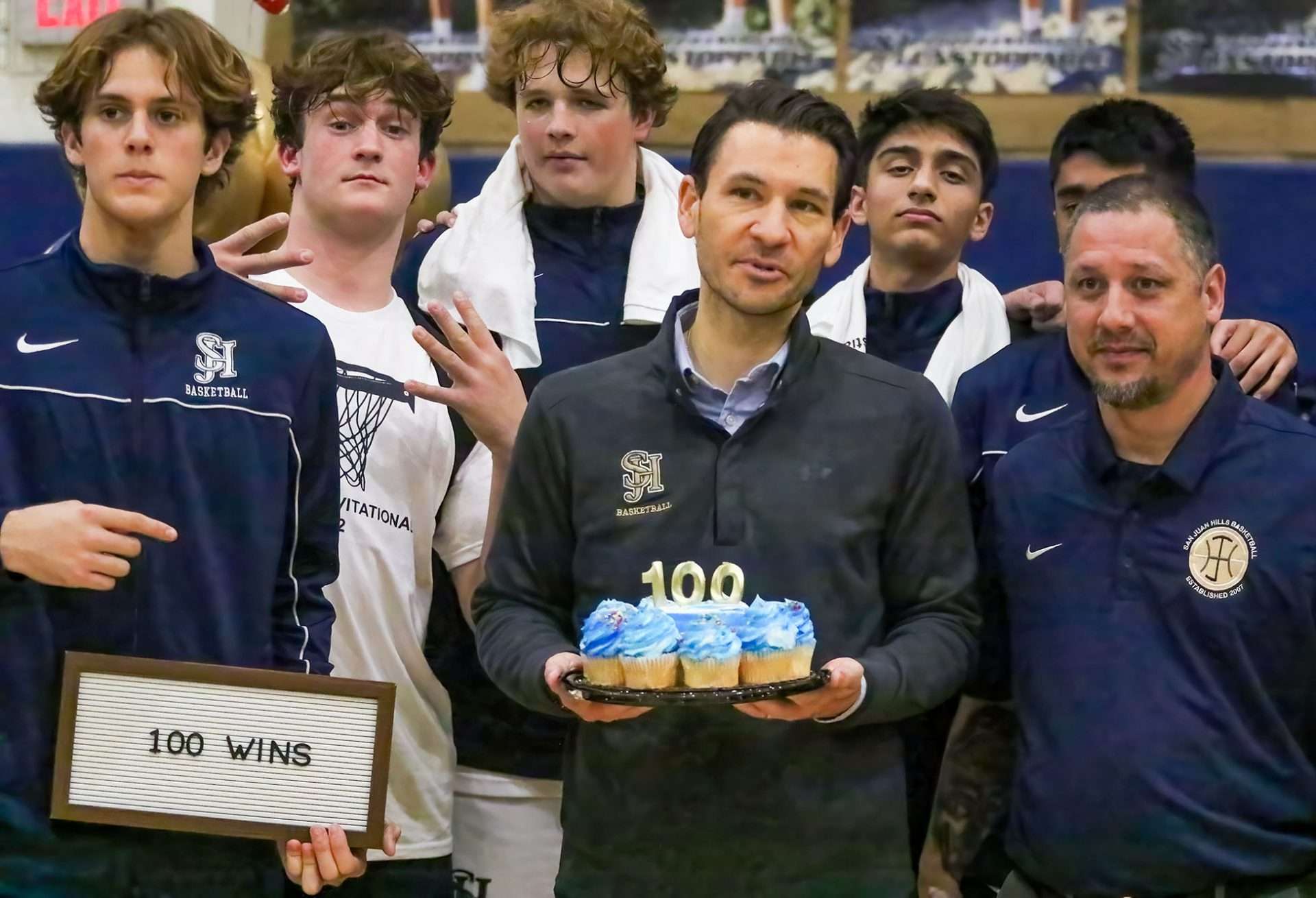 *This article is free. To get more stories like this join SOCoPrepSports Premium. Use the promo code: HOOPS for 30% off monthly and yearly memberships

His doctors diagnosed him with treatment-induced neuropathy of diabetes (TIND) from adult-onset Type 1 diabetes.

Fast forward to Saturday and a 57-52 win over El Toro gave him his 100th career victory.

“He’s a great coach and he’s so devoted to this program,” junior Nathan Brosch said.“He does so much for us and I just love him.”

Efstathiou was hired in 2015 after spending four years as an assistant coach at Aliso Niguel. Last season, he helped lead San Juan Hills put up the program’s best season when it won the CIF-Southern Section Div. 2A championship.

“It’s been a great experience being here,” Efstathiou said. “It is an amazing school with great faculty, staff, administration, coaches, and families. I’m grateful I have the job here.”

From the opening tipoff, the Chargers weren’t going to make it easy. They constantly put pressure on San Juan Hills’ offense, forcing the Stallions to commit turnovers.

Christien Jimenez led the charge for El Toro in the first half. He led with 11 first-half points and finished the game with 17 points while also putting pressure on the Stallions and forcing turnovers.

“We’ve really had a lapse in our defense the last couple of weeks,” Efstathiou said. “Normally, we are known for being tough on defense.”

The Stallions came out of the halftime break on a 11-5 run to swing the momentum back in their favor. Junior Luke Padilla converted a clutch three-point play to give the Stallions a 48-45 lead after the 3rd quarter.

“We picked up our intensity,” Efstathiou said. “There’s a big difference between 38 first half points and 14 second half points.”

San Juan Hills was able to see out the rest of the game in the second half..The defense turned up the intensity and the offense started hit shots.

Late in the 4th quarter, Brosch came up with a steal and dished it to Rylan Kies for an easy layup, putting the game away. Brosch finished with a team high 16 points.

“I was hitting my shots early on today which was nice,” Brosch said. “(El Toro) hit shots though, so we just had to stick with it, stay out on the wings, and not let their guys shoot.”

Kies and Padilla also finished in double digits with 10 points a piece.

San Juan Hills looks to carry on its success on Friday as they face Los Alamitos at home.