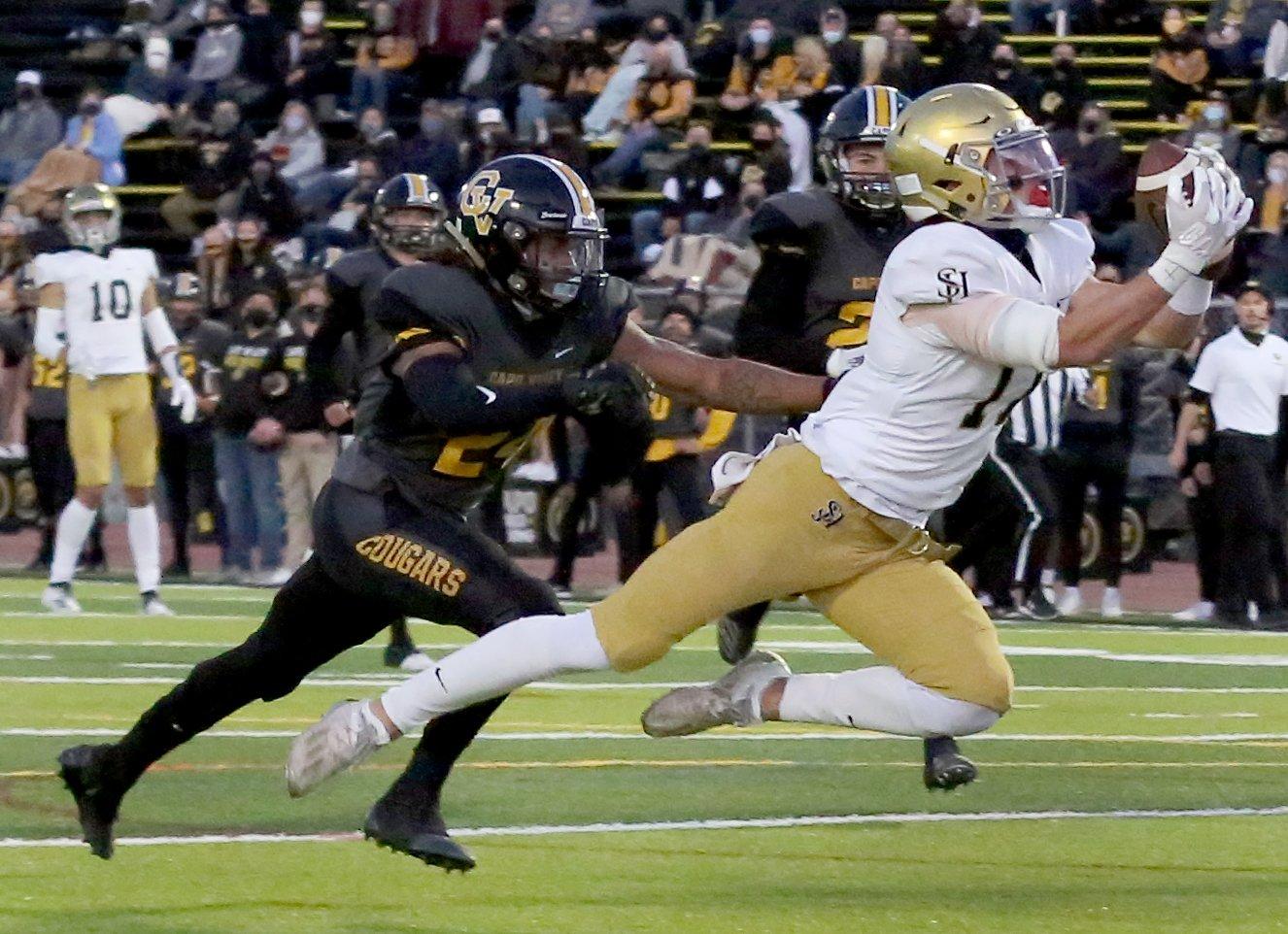 In fact, he only had 15 total receptions.

But he made sure let Capo Valley know who he was on Friday night.

Monach caught a career-high four touchdown passes as the Stallions cruised to their second consecutive win, defeating the Cougars 52-41.

“It feels really good,” Monach said, with a smile. “It was really fun to be out there.”

Capo Valley had a chance to take an early lead in the first quarter until junior Chase Schmidt reached up and blocked a field goal.

The Stallions’ momentum created a moment for Hudson Jones to throw a 41-yard pass to Braden Pegan and set up Monach’s first touchdown reception of the game.

Monach added another 37-yard touchdown reception and, after a 2-point conversion, San Juan Hills held a 15-7 advantage just before the end of the quarter.

Capo Valley entered the game with its own weapon in Dartanyon Moussiaux.

Moussiaux found a home with the Cougars last year and has shown how capable he is at orchestrating scoring drives.

He found Owen Taylor on a pair of touchdown passes and Dane Benedix for another but, with every touchdown, San Juan Hills answered.

Jones found Monach for his third touchdown reception of the game and took a 29-21 lead into halftime.

“He’s a playmaker,” said Jones, who completed 65 percent of his passes and finished with 234 yards. “People don’t see all the work he put in during the offseason, but it showed out on the field.”

During the second half, the Stallions added another layer of depth to their offense running the ball with senior Brayden Burnes.

Burnes showed his speed by sprinting down the sideline for a 12-yard touchdown run, and then, on the next San Juan Hills possession, ran into the end zone again, this time from 37 yards out.

He carried the ball 32 times for 175 yards and three touchdowns.

“(Burnes) is just a throwback (to the classic running back),” Frith said. “You put the ball in his hands, he is falling forward, you are getting those tough yards after contact and I’m so proud of him.”

With five minutes left in the game, Jones found Monach one final time for his fourth touchdown reception.

Monach limped off the field after hurting his ankle on the play but Frith said it wasn’t a serious injury.

Capo Valley ended the game with one final drive that culminated in Moussiaux’s fourth touchdown pass of the night, but the rally fell short.

“We didn’t finish tonight, but we are going to come back strong,” Moussiaux said.

Despite the loss, Moussiaux completed 28-of-54 passes for 367 yards and four touchdown throws. He also ran in two touchdowns.

The Cougars will look for its first win when it travels to El Toro next Friday.

As for San Juan Hills, it returns home to meet up with San Clemente.

And what about Monach?

Is he looking to improve on his performance next week?