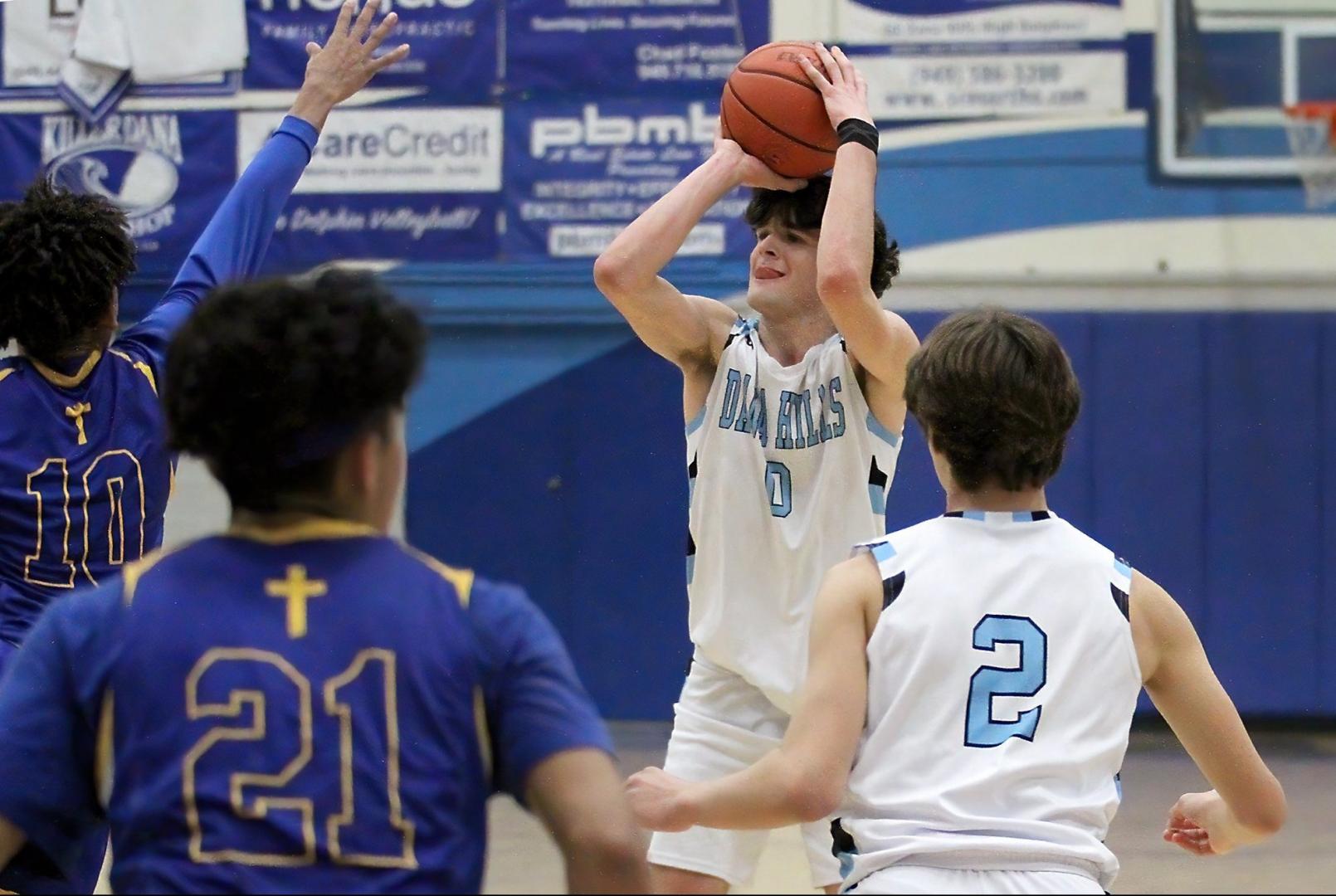 DANA POINT — Dana Hills boys basketball team has only been to the CIF-Southern Section semifinals once in its program’s history.

After Friday night, it can say it has been there twice.

The Dolphins outlasted Bishop Amat in the CIF-SS Division 3A Quarterfinals in what was the players called a rollercoaster of a game.

The difference was a put back by senior forward Adam Pellini with about a minute left in the game that resulted in a 55-52 win in front of a packed crowd at Dana Hills’ gymnasium.

“It was by far the most emotional game we have played,” Pellini said afterwards. “We went up, we went down but in the end, we prevailed.”

Dana Hills has been racing through the 3A field during the postseason, handling San Jacinto by 40 points in the first round and then beating Corona by 22 points in the second.

Things looked like the Dolphins would take firm control in this game as well after Pellini and Christian Boehmer sparked the offense and after a quick score inside, held onto a 19-10 lead.

Dana Hills extended its lead by as many as 14 points just minutes into the second quarter, but Bishop Amat made a run.

Alejandro Chavez scored three buckets inside and when Ben Shaw hit a 3-pointer shortly after, the Lancers deficit was down to five points.

The Dolphins answered, but Bishop Amat held the momentum and finished the half on a 8-2 run.

Dana Hills’ once 14 point lead was just a 34-27 halftime advantage.

“We just had to power through and stay on track,” said Pellini, who finished with 19 points. “We knew no matter what happens we had to be ready.”

The Lancers took their momentum in the third, but slowed their offense down to establish control.

Chavez scored on a couple baskets inside and gave Bishop Amat its first lead just two minutes into the second quarter.

Shaw converted a three-point play after driving in the lane as the Lancers outscored the Dolphins, 16-6. By the time the final quarter came around, Bishop Amat held their largest lead at 45-40.

“We tried to make a couple of adjustments but they stuck with what was working,” Desiano said. “They shortened the game for their benefit.”

Dana Hills showed it wouldn’t back down when Boehmer and senior Griffin Haugh hit 3-pointers on consecutive possessions.

While the Dolphins stayed close, they still couldn’t grasp the lead.

Lancers’ guard Christian Griffin converted a three-point play to retake the lead with about three minutes remaining, but it wouldn’t be enough.

Pellini got to the free throw line to cut the deficit down to three points and then scored the go-ahead put back off of his own miss which would be the difference of the game.

“That play was just effort and that is what we are always asking,” Desiano said. “That second effort essentially won us the game.”

Griffin had a chance to give the Lancers the lead with 13 seconds left but his 3-pointer in the corner was offline.

All Haugh had to do was hit two clinching free throws for the victory.

He also finished the game with 14 points.

“We are really excited about this win but we are focused,” Haugh said.

Dana Hills will now travel to Long Beach Millikan in the 3A semifinals.