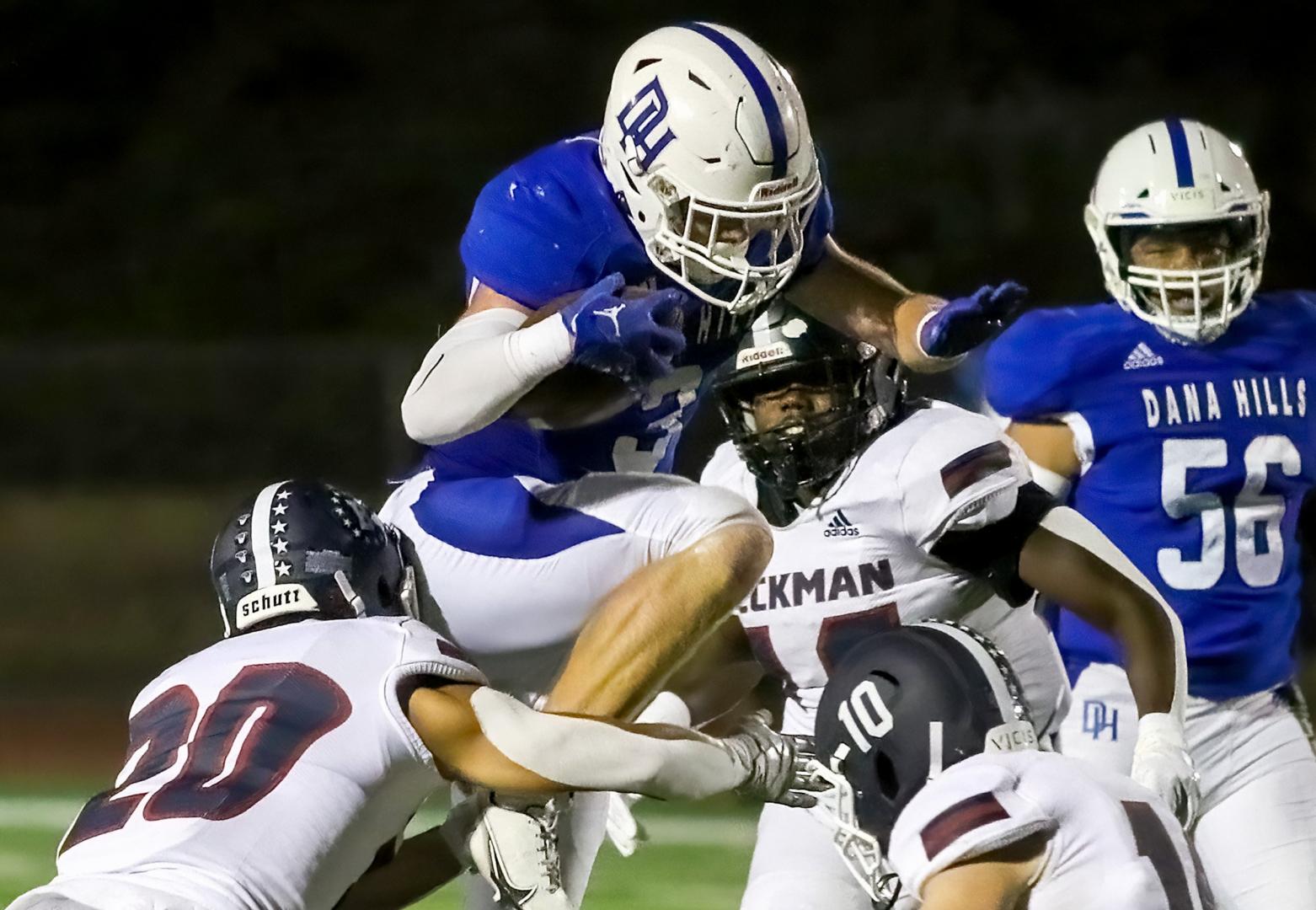 DANA POINT — Dana Hills football coach Tony Henney was thinking about one thing prior to kickoff on Friday night.

The Dolphins were looking to bounce back after a 31-point loss to Eisenhower last week, so they focused on what has worked this season.

And that was running the ball.

Dana Hills senior running back Christian Guarascio scored three touchdowns and finished with 17 carries for 145 rushing yards as the Dolphins breezed past Beckman, 35-7.

“This was huge,” Guarascio said. “After the loss we came in on Monday with a fresh mindset, worked harder than we ever have and it really showed on the scoreboard tonight.”

The Dolphins wasted little time taking grabbing the lead when senior quarterback Connor Vernon capped off a 69-yard drive with a 16-yard touchdown pass to Guarascio in the corner of the end zone.

The offense didn’t have long to catch their breath when Beckman fumbled on its first play and was recovered by the Dolphins’ Blaize Bolter.

Eight plays later, Guarascio found himself in the end zone once again, this time after an 11-yard touchdown run.

“(Christian) really sets the tone and with our wide receivers Bolter, Chase Berry, and Noah Kucera, hopefully we can give him some more running lanes,” Henney said. 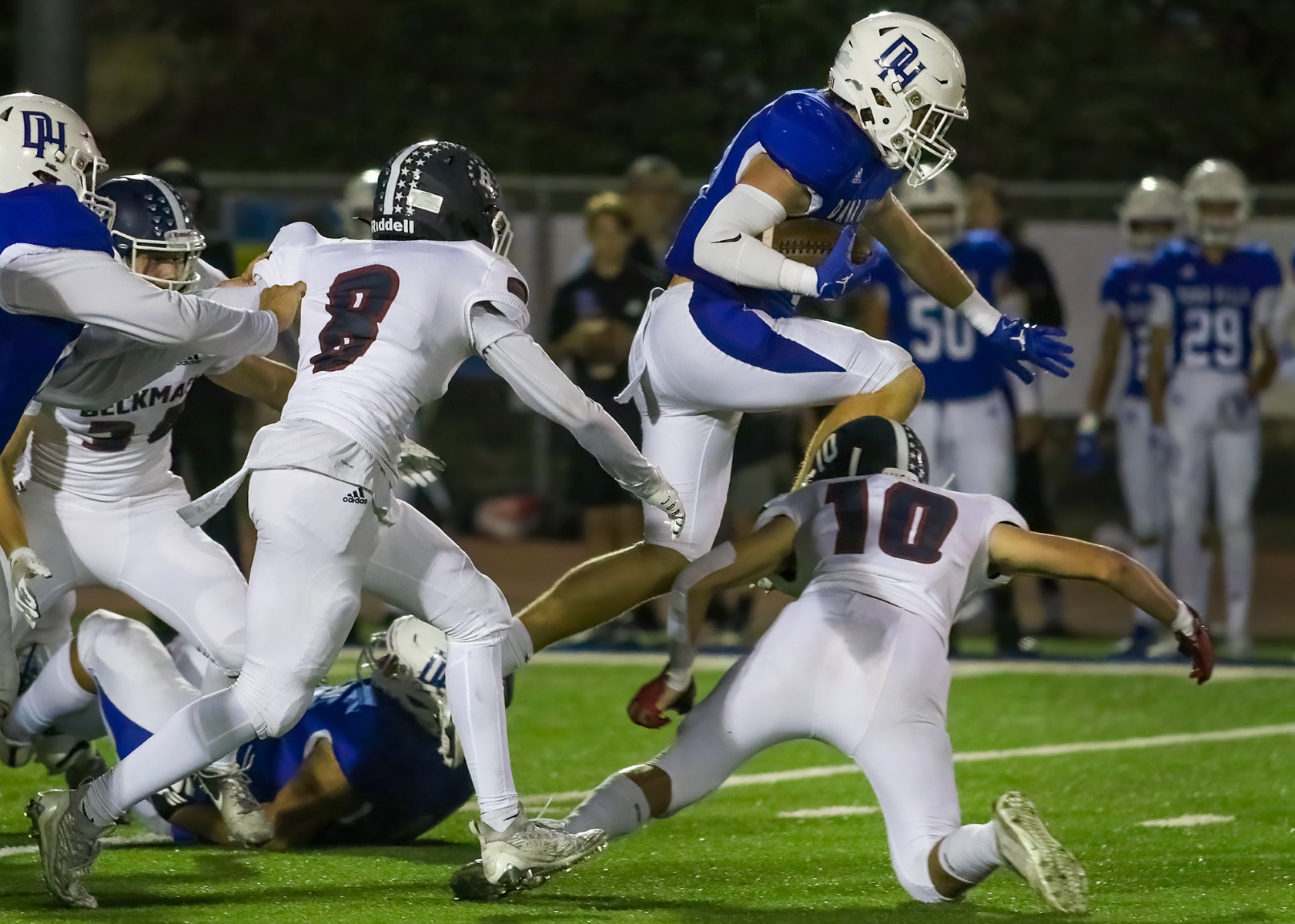 While Bolter and Berry have already seen playing time this season, Kucera, who came from San Juan Hills,  put on his jersey for the first time after having to sit out the first five games because of CIF transfer rules.

He caught three passes on the Dolphins’ next drive to set up another Guarascio rushing touchdown. By halftime, Dana Hills held a commanding 21-0 lead.

“It felt great,” Kucera said. “I’ve waited a year for this moment and it was just awesome to go out there and play with my brothers.”

Beckman had already established a running game midway through the first half led by running back Jonathan Sandoval, but the only problem was the offense couldn’t score.

Just before halftime, the Patriots fumbled on the 1-yard line and on its first drive of the second half, quarterback Nick Molina threw an interception to Kucera inside the 10-yard line.

It wasn’t long before the Dolphins used that momentum for another score when Vernon found Bolter for a 10-yard touchdown pass.

“It felt really good to execute on all phases of the game,” Henney said. “I thought our defense bent a little bit but made plays when they needed to. Our special teams played well too.”

Dana Hills added one last touchdown before Beckman answered when Vernon found Kucera on a swing pass. It was Kucera’s first varsity touchdown.

“I just ran behind the quarterback and he threw it to me,” said Kucera who finished with three catches for 49 yards. “Blaize Bolter made a good block and I ran right through.”

The Dolphins will play its final regular season home game next Friday when it hosts Portola before starting its Pacific Coast League schedule where it plays all three games on the road.