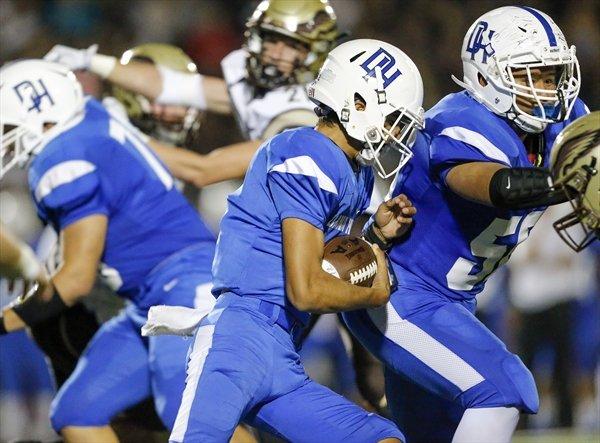 Dana Hills finished with its best start in program with six straight wins. The Dolphins look to improve on that this season. (Tim Peck, MaxPreps.com)

DANA POINT — The last few years have not been favorable for Dana Hills football.

But the coaching tandem of Phil Skinner and Curtis Madden are now focusing on changing the culture on the field.

“We are making football feel professional by doing things the right way,” Skinner said, who was hired in 2015.

Skinner hired Madden three years ago as the offensive coordinator, who has now been promoted to co-head coach. Former Northwood head coach Paige Nobles was also hired to help on defense, along with former NFL player Rob Robbins who will work with the quarterbacks.

“When you have higher level of coaching, things start rising up,” Skinner said.

The Dolphins have had a history of being at the bottom of the Sea View League for the past five seasons, but Skinner and Madden echo patience when steering a program around.

“It takes time,” Madden said. “This is reminiscent of the process I had to go through as a player. If they buy into what we are teaching the wins will come. We control our destiny.”

Dana Hills improved last season, winning their first six games for the first time in the program’s history. The second half of the season didn’t fare well, however, as the Dolphins lost their last four games.

The improvement might have not put the Dolphins in the playoffs but it did help them find their identity. Now, they embrace being the underdog.

Kelly is just one of six starters returning on offense, and he looks to improve.

As a sophomore, he converted 44 percent of his passes, throwing nine interceptions while splitting time with senior Zack Saavedra.

“The biggest thing during this time with the pandemic is that it has really given me a relationship with my receivers,” Kelly said. “I’ve been working on my timing and getting on the same page.”

“Pound-for-pound, he is the most explosive player we have,” Madden said. “He gives us a component in speed that we typically don’t see at Dana.”

On the other side of the ball, Lukas Saavedra will anchor the defense and is confident in his team’s ability to shut down any offense.

“This defense is special,” Saavedra said. “We are bigger and faster and we are an older group with a lot of experience. Our defensive backs have a lot of speed that can cover a lot of ground, and our linebackers are big and can fill the gaps. I can’t wait to see what we can do.”

Dana Hills and its players are excited to get back on the field. It’s been 16 months since any sort of competition because of the coronavirus pandemic and, for the seniors, Madden said it gives them some closure.

“If we weren’t playing, there would always be that question of ‘what if?’” Madden said.

The Dolphins start their season on March 19 against Beckman and with a new season comes a new attitude; an attitude that the players are buying into.

“I like going into a game thinking that people underestimate us,” Madden said. “Most people think we are just the same old Dana. Fine. We will show you.”

Tesoro football and its coach looking forward to stepping back on the field
‘Work in progress’: JSerra football will bring youth, greenness into Trinity League