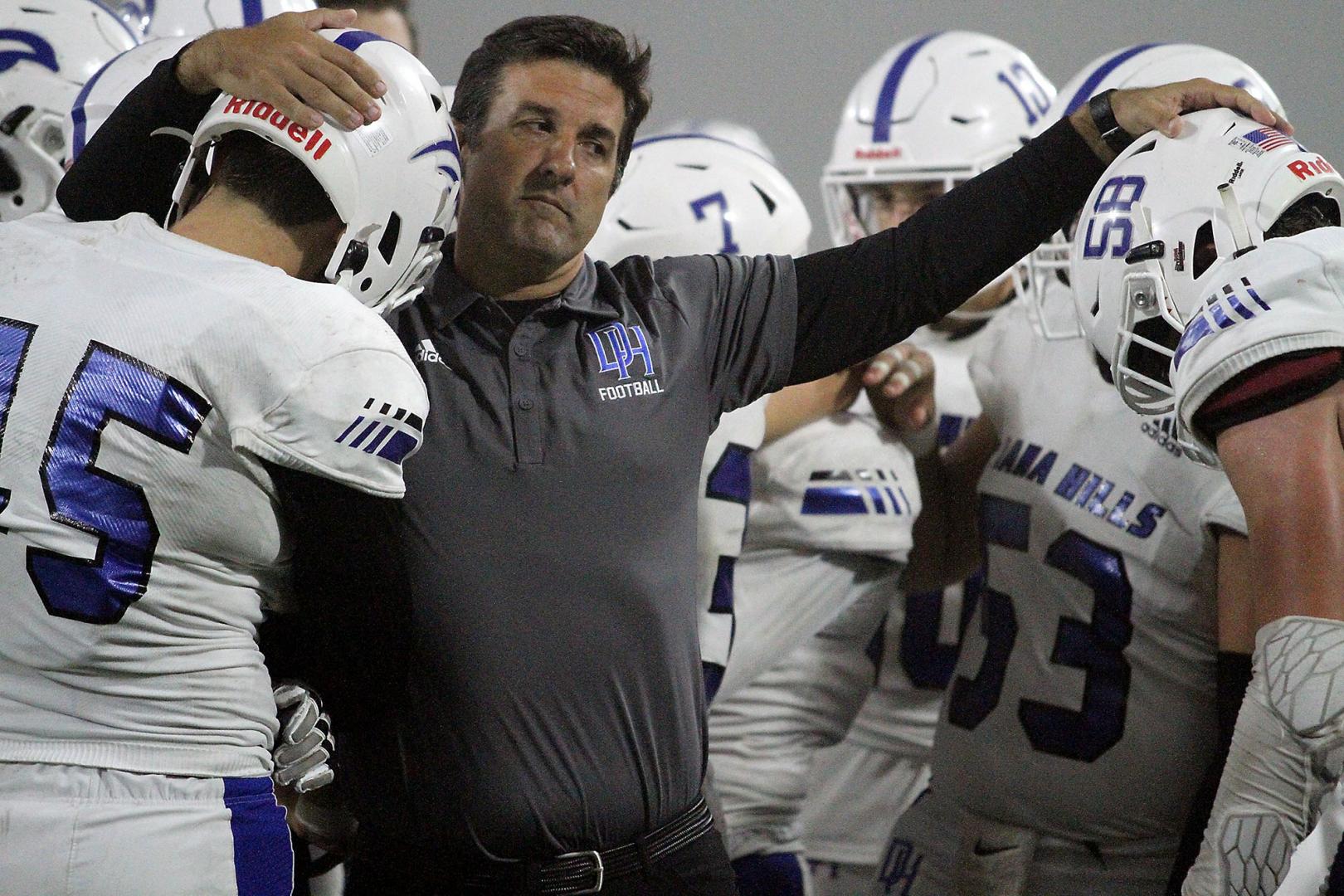 Dana Hills football coach Tony Henney consoles his players after their overtime loss to El Modena in the first round of the CIF-Southern Section Division 5 playoffs. The Dolphins lost 23-20. (Ryan Kuhn, SOCoPrepSports.com)

They couldn’t believe what had happened.

How could this happen?

The Dolphins watched as their season ended in overtime.

El Modena quarterback Jack Keays scored on a 5-yard run, giving Dana Hills a 23-20 loss to the Vanguards in the first round of the CIF-Southern Section Division 5 playoffs.

“I thought we fought like a team that belonged (here).” Dolphins’ coach Tony Henney said. “I don’t know if you can ask for anything more.”

Dana Hills was playing their first playoff game in eight years. In the years prior,  it was a Division 12 team. This season their ranking vastly improved.

“Being able to flip around a program like we did,” Dana Hills quarterback Bo Kelly said. “You can’t put words to that.”

Despite the long playoff drought, it didn’t take Dana Hills long to get comfortable.

After El Modena scored a field goal on its opening drive, the Dolphins quickly answered.

It took four plays for quarterback Bo Kelly to throw a screen pass that wide receiver Omar Black took 68 yards for the touchdown.

“You got my friend and teammate (Owen) Chambers blocking for men,” Black said with a smile. “It was all because of my teammates.”

By the start of the second quarter, El Modena established its running game as Keays and running back Owen Smith marched the Vanguards 96 yards down field for the score.

Keays capped off the drive with a 23-yard touchdown run.

Henney knew El Modena has had success running the ball this season but its was forced to pass late in the season because it was behind in games.

By the end of the night, Keays and Smith combined for 265 rushing yards.

“You could just see how they can get after people,” Henney said. “When they were able to impose themselves they are pretty good.”

The Dolphins answered on just two plays as Kelly first found Chambers on a 56-yard strike, setting up Black’s second touchdown, an 19-yard catch to take the lead into halftime.

El Modena was close to scoring just before the end of the half but Dolphins’ Hayden Dendiu brought down Blake Armstrong on the 1-yard line just as time expired.

“That was huge because you don’t want to swing the momentum,” Henney said.

During the second half, El Modena’s defense rose to the challenge.

Kelley scrabled all over the foggy field as he was getting pressure from junior Esteban Choucair and the rest of his defensive line.

“They have some dogs up front,” said Kelly, who finished 16-of-28 for 327 yards and two touchdowns. “They had speed, they had size but our guys battled.”

The Vanguards took the lead on a Keay’s 2-yard run but the Dolphins held their ground.

Senior Kian Anafrookhteh tied the game with a 34-yard field goal early in the fourth quarter but it was the defenses who stepped up forcing both teams to punt the ball. The Dolphins’ offense had the chance to score the game winning drive but Kelly’s passes fell short as time expired.

Dana Hills was able to get a field goal to start overtime, but couldn’t stop the Vanguards’ rushing attack.

It didn’t help that the Dolphins were also called for five holding penalties.

As El Modena was celebrating on their sidelines Henney brought his team over to a corner of one of the end zones and explained to his team how far thy have come.

“This was a team that was yearning to be coached,” Henney said. “It was a different scenario than I have ever been in and they wanted to be good at this and it meant something to them. It was fun to be a part of this.”

The Dolphins will graduate Kelly, their top four wide receivers in Black, Chambers, Broughan Daley and James Allemann, and their top defensive player, Jagger Wiesen, but Henney hopes the younger players can build off what has been built just four months ago.

“I hope these guys see that we need to improve,” Henney said. But I also hope they take away the passion from these seniors brought to bring competitive football program at Dana Hills.”