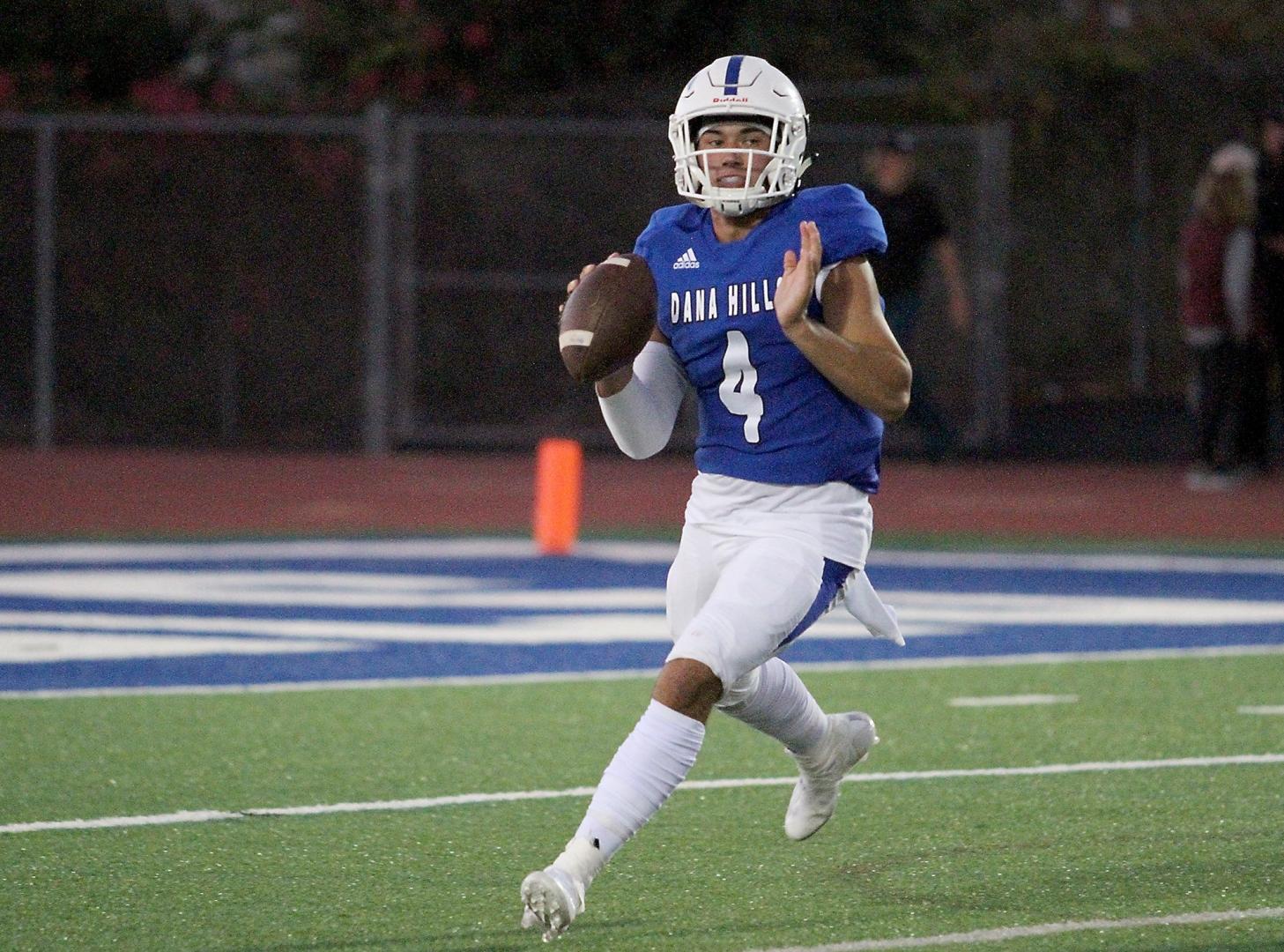 DANA POINT — Dana Hills senior quarterback Bo Kelly made sure to make a statement to begin his final season.

It started with a 33-yard pass to Owen Chambers on the first play of the game.

It ended with his team celebrating a 35-7 win over Laguna Beach.

And the story read how he tied his career best with four touchdown passes en route to the victory.

“He’s just so fun to coach,” Dolphins’ first-year head coach Tony Henney said. “It’s so awesome the way he keeps his eyes down the field. The receivers know he has that quick release with a lot of different angles. He’s going to make a college very, very happy.”

Kelly is coming off the shortened pandemic season last spring where he threw for 1,333 yards and 15 touchdowns.

HIs first touchdown of this campaign came on a 16-yard strike to wide receiver Omar Black on the opening drive of the game.

He threw another 15-yard pass to tight end James Alleman to set up a 17-yard touchdown run by Christian Guarascio.

By the end of the first quarter, Dana Hills had a commanding 14-0 lead.

“(Laguna Beach) tried to press us but we have some weapons,” said Kelly, who also finished throwing for 275 passing yards.

The Breakers were coming off a career offensive night where they put up 55 points against Costa Mesa last week, but with their top two running backs Cooper Buckhorn and Tyler Fields injured, their offense sputtered punting the ball away on their first five drives.

Dana Hills continued to find success through the air as Kelly found Chambers for a 25-yard touchdown pass midway through the quarter.

He added his third touchdown pass not too long after to Alleman.

“”We moved him from wide receiver to tight end and he has been one of the most improved players this summer,” Henney said of Alleman.

He credits his dedication to playing multiple sports such as basketball and baseball helping his mobility but he also makes surety know football has to be fun.

HIs coach, watching, was just holding his breath.

“We have to be more rational at times and clean some stuff up,” Henney said, with a smile.

Kelly and the Dolphins finished the half with a fourth touchdown pass, this time to Black with just seconds remaining.

With a five-score lead, Dana Hills shifted their offense to more of a running scheme in the second half.

Kelly made a few throws but was just shy from the first five-touchdown game a Dolphins quarterback had in five years.

“I honestly wasn’t really thinking about it,” Kelly said. “We didn’t play the second half like we wanted to.”

Laguna Beach finished the game when Will Bingham scored on a 12-yard run with about four minutes remaining.

Despite a strong start and claiming his first victory as the Dolphins coach, Henney knows there is plenty to improve on as the season continues.

There is no rest as his team’s next meeting is against Trabuco Hills, his former team where he won a CIF-Southern Section Southwest Division championship in 2014.

“Trabuco Hills is very dear to me,” Henney said. “It’s going to be fun to compete against them.”

As for Laguna Beach, it will look to rebound during a road game against Northwood.