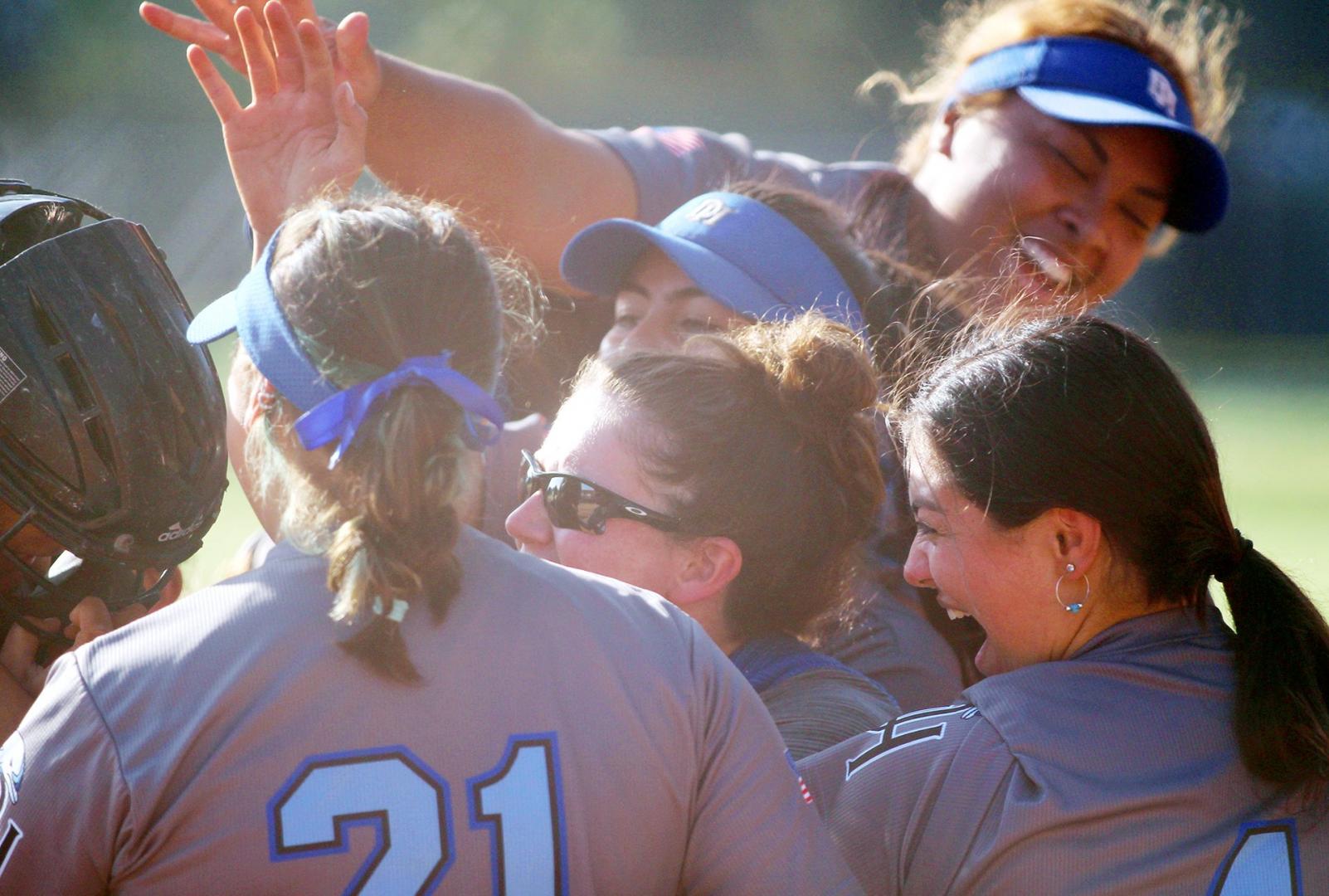 Members of the Dana Hills softball team celebrate a win over Mission Viejo on Tuesday, May 13, 2021 after catcher McKenzie Lombard records the final out. The Dolphins won 12-9 (Ryan Kuhn, SOCoPrepSports.com)

Her catcher, McKenzie Lombard, knew she was frustrated, but she told her everything was going to be fine.

And one inning later, it was.

The Dolphins scored eight runs, including Lombard crushing a go-ahead three-run home run that ultimately led to a 12-9 victory.

“I wanted to be the one to help (Delaney) out,” Lombard said. “”(Mission Viejo) was getting cocky and it made me mad.”

Dana Hills season has been a rollercoaster, having lost eight of its first 10 games but, recently, in late April, turned its season around with a 3-1 South Coast League record.

Now, the Dolphins are in a tie with the Diablos atop the standings with two games left on the season schedule.

“This team never stops believing,” Dolphins coach Brandon Cosenza said. “This was one of the most gratifying wins I have had as a head coach.”

The Dolphins might have turned their season around, but they trailed early against Mission Viejo, watching three runs score in the first inning.

While Elliot has been primarily a dominant pitcher this season with a sub-four ERA, she is also batting .340 and is second on the team in RBIs.

By the end of the third inning, McRae was replaced by junior pitcher Kaci Palmer and Dana Hills was looking up from a 8-2 hole.

But Cosenza had confidence in his offense.

The Dolphins batted around in the bottom half of the inning with eight hits.

Palmer, Isabella Llamas, Naya Seligson, and Kassidy Lerum had RBI-singles and the lead started to chip away.

Then Dana Hills’ dugout exploded in celebration when Lombard hit her home run.

It was her third of the season.

Mission Viejo came back with a run in the fourth inning, but any hope for a rally was halted in the top of the sixth inning when senior third baseman Piper Tago tagged a 2-run shot to left field.

Dolphins add another two runs with a 2-run dinger by Piper Tago.

“I knew I just had to square up and score some runs for the team,” said Tago, who is batting .356 this season.

Lombard was the first to congratulate her as she rounded the bases.

The Diablos had a chance to score one inning later but a perfect throw home to tag the runner ended the game.

Cosenza didn’t say who he would be throwing against the Stallions, but no matter who it is, her teammates will have her back.

“It says a lot about the girls,” Cosenza said. “They are very selfless, they are about the team and they really bought into the culture we are trying to create around here.”