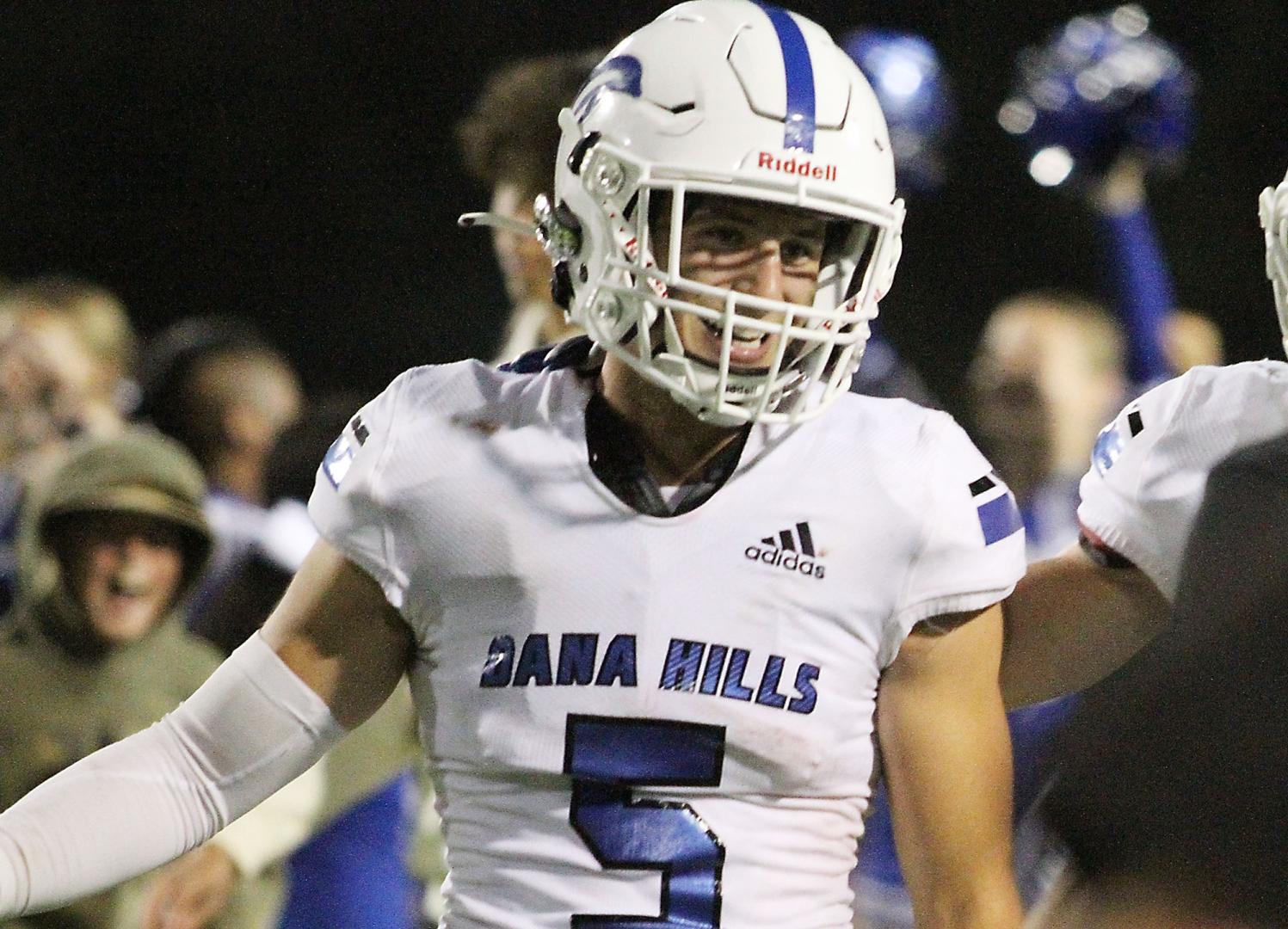 He did so when he suited up for JSerra.

Now, he is doing so for his new team, Dana Hills.

Chambers finished with a season-high four touchdown receptions as the Dolphins came back to defeat Aliso Niguel, 29-28 on Friday night, in what his coach, Tony Henney, called a “program-changing win.”

“When you play somebody that is ranked higher than you, has big wins coming in and you take their best punches and come back and win, that changes the culture within your program,” Henney said. “Guys start to believe and that lasts forever.”

The Dolphins were coming off a loss to Trabuco Hills last week, but the offense quickly put it behind them.

Chambers is just one of three wide receivers Kelly has consistently used this season and said what makes Chambers so successful is his maturity.

“He knows the game,” Kelly said of Chambers, who also complemented his four touchdown passes with 265 receiving yards. “He knows how to communicate out there and we are always on the same page.”

Despite three turnovers in the first quarter, Aliso Niguel was able to tie the game with about five minutes left when senior running back Chase Christner scampered into the end zone from three yards out.

By the end of the first quarter the game was tied 7-7.

“You just can’t turn the ball over that many times,” Aliso Niguel coach Mike Calahan said.

Chambers made another appearance in the second half when the Dolphins picked off quarterback Shaun McCaghren for a second time.

“The team needed to make some plays and to be the guy that stepped up feels great,” Chambers said. “I just did it for this team.”

Dana Hills thought it had one more opportunity to score when James Allemann caught a 39-yard pass down to the 3-yard line but time expired before it could not get another play off.

The Dolphins extended their lead in the third quarter when Kian Afrookhteh hit a 33-yard field goal but the momentum quickly swung the other direction.

Christner scored his second touchdown finding room on the outside for a 36-yard touchdown run and then sophomore Mark Macabitas intercepted Kelly to set up Christner’s third touchdown three plays later.

Although he played both football and baseball last season and finished with just 188 yards rushing during last year’s pandemic season, Christner is on pace for more than 800 yards rushing and already has six touchdown runs.

Both teams exchanged scores throughout the fourth quarter.

Chambers caught a 52-yard touchdown pass only for Christner to score on a 4-yard run on the ensuing possession.

Finally, with just over two minutes left Kelly found Chambers four a 56-yard touchdown pass with 39 seconds left in what would be the game-winning score.

After congratulating his team, all Henney could do was sit down on the Wolverines’ artificial turf and take in what happened.

Not only did he just give Dana Hills’ its first victory against Aliso Niguel since 2013, but he just celebrated the birth of his son Lucas Alexander Henney.

The players didn’t know he was going to show up until they saw him run on the Dolphins’ sideline just before kickoff.

“I’m happy I’m here,” Henney said. “Aliso Niguel is a great team and every time they made a play I thought we battled back. It was a great sign of maturity.”

Dana Hills will now spend the next three games away from Dana Point starting with next Friday when it travels to Woodbridge.

As for Aliso Niguel, it will also be on the road when it faces El Modena.