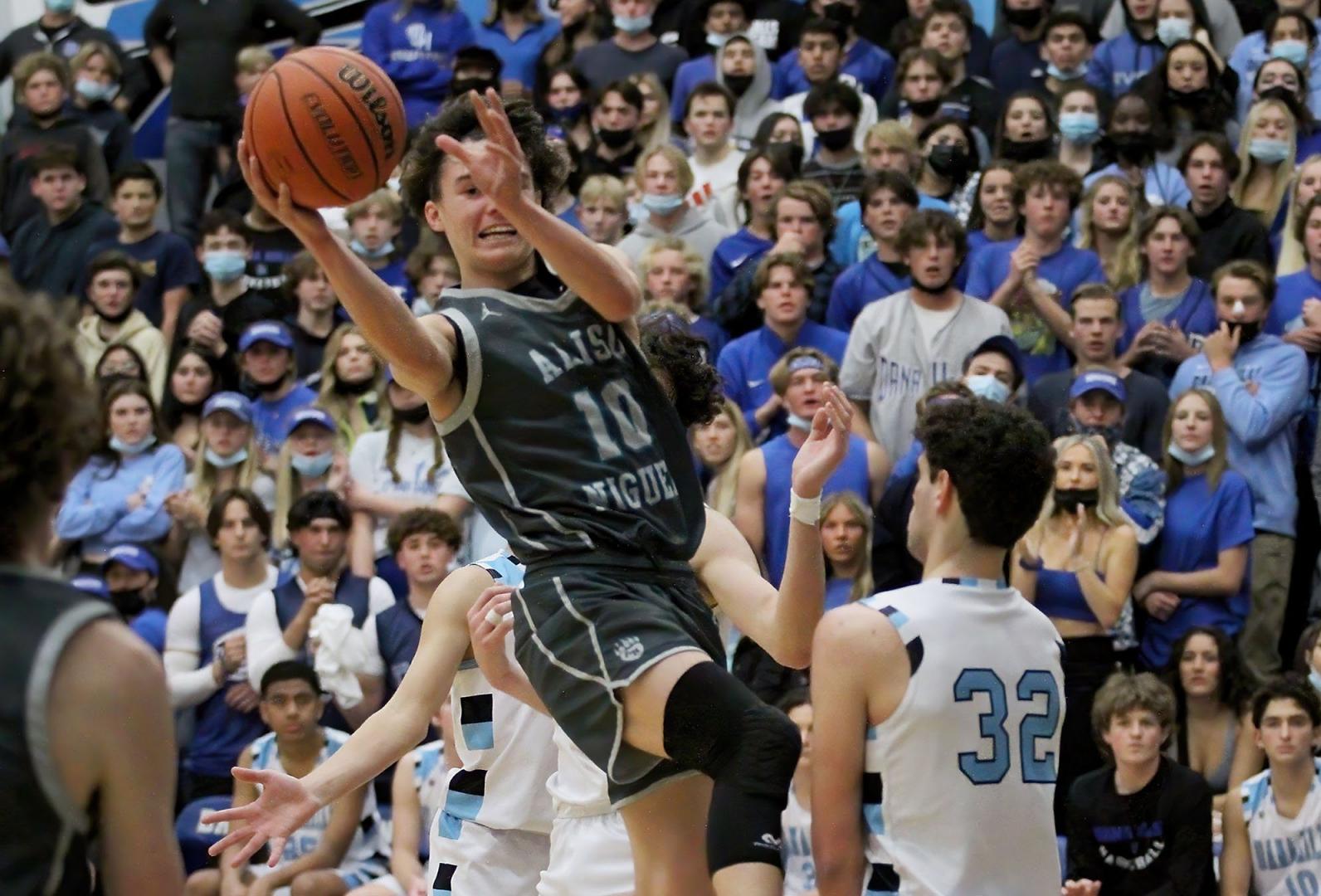 DANA POINT — The Aliso Niguel boys basketball team has been focusing on defense all season.

On Friday it showed its hard work paid off.

The Wolverines made some key stops down the stretch as they took down Dana Hills, 71-65 on its home court.

It was a win that Aliso Niguel coach Keith Barnett said they needed in the Sea View League.

“This was an important game for us,” Aliso Niguel coach Keith Barnett said. “I thought we did a much better job defensively. I’m real proud of my guys.”

While the Wolverines’ defense shined, the offense started the game with san 8-0 run forcing the Dolphins to take a time out.

Following a quick time out, the Dolphins found their rhythm as brothers Griffin and Collin Haugh each hit a 3-pointer followed by a third outside shot from Christian Boehmer.

The only problem was that Wolverines’ senior Tyler Weaver matched the shot with a 3-pointer to end the quarter with a 26-24 advantage.

“The pick and roll and me and Brandon (Novida) showed it was hard to guard so we kept it with the flow we were having,” Weaver said.

Weaver has been Aliso Niguel’s motor all season.

He’s scored at least 20 points in his last four games.

And it didn’t stop there.

He finished with a game-high 35 points and kept Aliso Niguel’s student section on its feet.

“He’s actually a pretty quiet kid but when you put him on the floor he gets really, really competitive.,” Barnett said with a smile.

But the Dolphins answered in the second quarter as Collin Haugh, a freshman, chipped in eight points in the quarter and led his team into halftime with a 40-36 lead.

After allowing 40 points in the first half, Aliso Niguel’s defense tightened up.

Adam Pellini hit a 3-pointer and Griffin Haugh hit some shots, but the Dolphins were held to just 11 points in the third quarter.

“When we defend really well it gives us good energy,” Barnett said. “We did a better Jon in the second half containing the dribble and not getting beat off of penetration.”

Aliso Niguel’s offense also capitalized. Novida started to find his touch, scoring six of his 18 points in the quarter and the Wolverines held a 57-51 lead.

Dana Hills put together one final run in the fourth quarter when it tied the game with 5:31 left, but could never regain the lead.

The Dolphins had one final chance to tie the game with 43 seconds left but they mishandled the ball out of bounds sealing the win for the Wolverines.

Desiano said the backbreaker was a step-back 3-pointer by Novida with about two minutes left and the Dolphins could never recover.

“We didn’t lose the game, (Aliso Niguel) won it,” Desiano said. “If a kid can make that kind of shot, my hat’s off to him. This was just a great high school game for both teams.”

Dana Hills doesn’t have time to rest, their next league game is next Friday against San Juan Hills, who beat Aliso Niguel just last week.

A win could put all three teams into a three-way tie for first place in Sea View League play.

Laguna Beach will be small, but mighty if it plays clean, consistent football

Back on the road today. We have three stops on the

Laguna Beach will be small, but mighty if it plays

Next up we are headed into Laguna Beach to check o

“I believe we found that winning culture.”- St

Back on the road bright and early. The 2022Footb

So we are circling back to El Toro. Scheduling wil

Back at it bright and early. First stop today will

"Our skill positions have proved they are the best

Took a wrong turn.↪️ The Kickoff Tour will co

Right back at it. Next stop on the 2022 Football

Next stop on the 2022 Football Kickoff Tour tomorr

On the road again! This afternoon we will head on

I want to send a big thank you to Mission's footba

Don't forget to join #SOCoPrepPremium to get all t