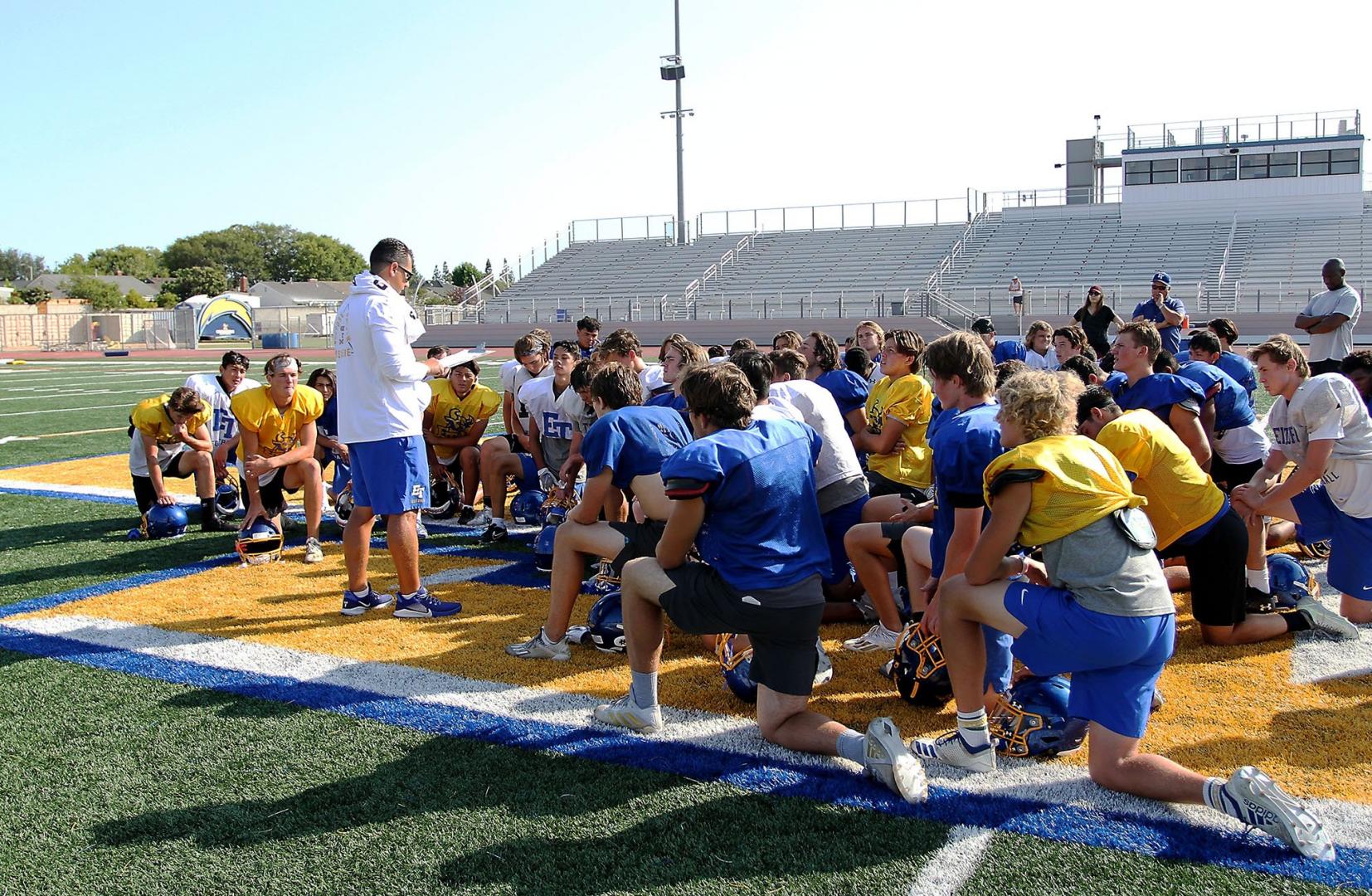 El Toro football coach Randall Reynoso talks to his players at the conclusion of practice on Thursday, Aug. 12, 2021. El Toro finished with a 3-2 record last season after finishing with just one win in 2019. (Ryan Kuhn, SOCoPrepSports.com)

LAKE FOREST — Randall Reynoso was confident he could turn the El Toro football program around.

And it didn’t take long.

After a five-game spring season, the Chargers finished with three wins, its most since 2018.

“It was nice to be a part of this historic program and get it back to where it used to be,” Reynoso said. “It starts with me and I put pressure on myself every day.”

Now, the Chargers aren’t slowing down.

They returned to to the field in June following a three-week dead period and since they have been focused on moving forward.

“We just sort of jumped back in flawlessly and it’s been really great,” Reynoso said.

“He’s all of 6-foot-2, 185 pounds and one of the fastest guys on there team,” Reynoso said. “If a play breaks down, he is the most dangerous guy on the field. We really build the offense around him.”

Over the first four games, Miller showed much improvement with eight touchdown passes. He only threw one in limited time back in 2019.

“I had to learn a whole new offense but I loved it,” Miller said. “I was just happy to get out there (in the spring) with my teammates.”

Defensively the Chargers graduated first team all-conference linebacker Giulio Fernandes, but Reynoso said Williams will be a player than can make an impact on the defensive side as well.

Williams originally transferred in from JSerra and said his new team is headed in the right direction.

“I really like playing for Coach Reynoso,” Williams said. “He helped me a lot and we are really trying to become more of a family.”

Williams isn’t the only one to embrace the new culture.

Miller said El Toro is all about having a “we” mentality rather than a “me” mentality.

“I”m committed to this team. We all should be,” Miller said. “Coach installed this culture and now I’m trying to step up and tell these players to pick it up and be more of a team.”

El Toro starts its season against five teams from North Orange County or Los Angeles before focusing on some local home games against Tesoro and San Juan Hills starting on Sept. 24. After that, it jumps into Sea View League play starting with defending league champion Capo Valley on Oct. 15.