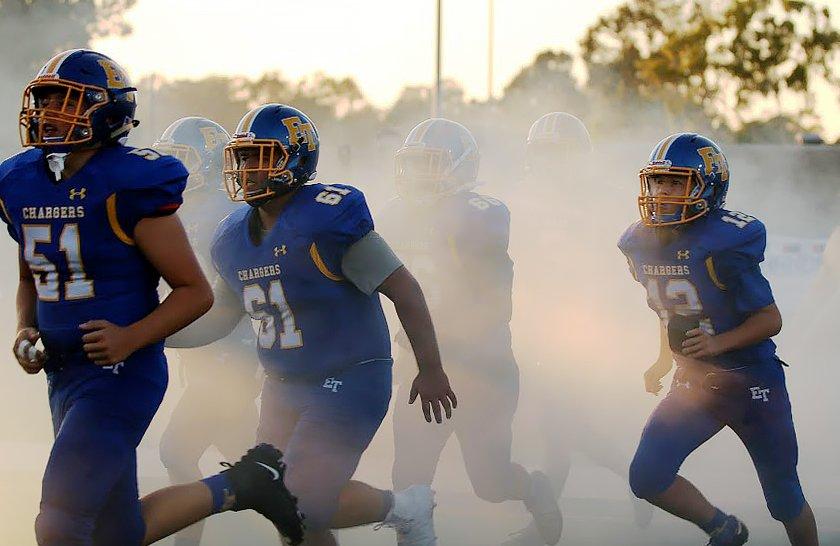 Members of the El Toro football team jog out to the field in a non-league game against Cal High on Aug. 20, 2019. Under new head coach Randall Reynoso, the Chargers look to turn around its recent struggles. (Courtesy of El Toro athletics)

But now under some new guidance, first-year head coach Randall Reynoso is confident he can turn the program around.

The Chargers finished the 2019-20 campaign with just one win and saw their head coach, Andy Diaz, resign for personal reasons immediately after the season concluded.

“The last couple of years have been pretty tough, especially for the seniors,” said Reynoso, who was hired in January 2020.

Reynoso spent the last two seasons as the head coach of Crean Lutheran and believes that success on the field is the result of a year-round process.

“The players need to get familiar working six or seven days a week and committing themselves,” Reynoso said.

He signed to play football with the University of San Diego next fall but is excited to see what the Chargers can do under Reynoso’s leadership.

While Fernandes will anchor the defense, Reynoso said the offense is less experienced.

Junior quarterback Blake Miller was named the starter but struggled last season, completing 38 percent of his passes and throwing 10 interceptions.

“He has a strong arm and some good feet,” Reynoso said. “We will see how he is able to function on offense.”

El Toro was supposed to start its season this past Friday against Troy but it was cancelled because of COVID-19 concerns.

While both teams tested negative last week, the Fullerton Joint Union High School District did not allow Troy to play because of positive tests tracing back to scrimmage opponent, Westminster, the week prior.

“It honestly really sucks because we have been looking forward to playing for so long,” Fernandes said. “We just have to look at it like every week is a new opportunity. At least we have a couple games left. At first, I honestly thought we wouldn’t play at all.”

The Chargers still have a challenging schedule in front of them, including a road game against defending CIF-SS Division 4 champions San Juan Hills on March 19, but the players know success will come.

“The goal this year is to show we are a different football team,” Fernandes said. “I just want to win some football games and win league.”