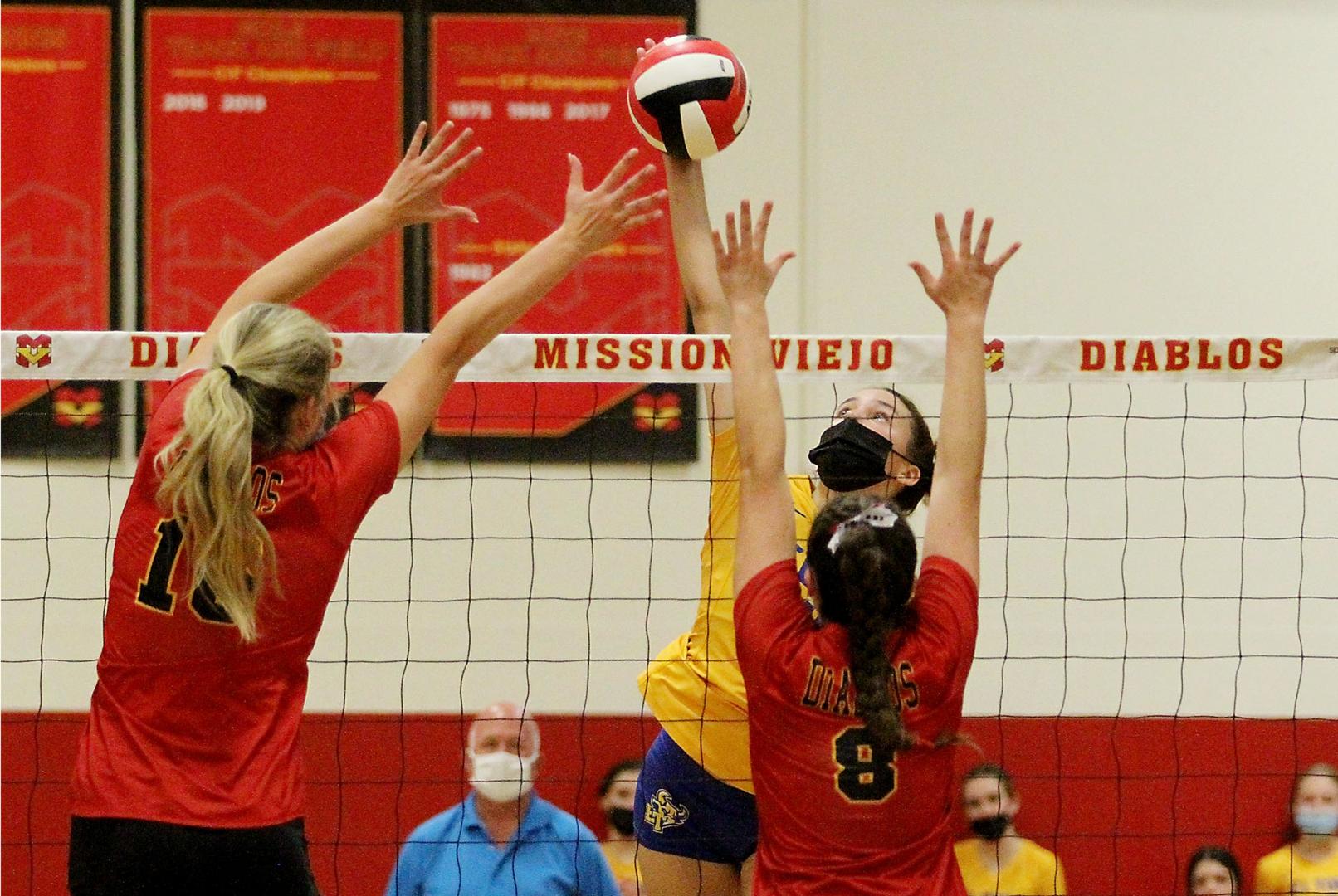 A tear even started to form.

“I don’t even know what to say,” Culver said. “It makes me super emotional just to think about how hard these girls have worked.”

The match saw both teams staying neck in neck with each other.

Mission Viejo jumped out to a 9-5 lead in the first set, but the Chargers rallied with a pair of aces by Catalina Baclawski to tie the game back up, 10-10.

Sydney Schuler scored the set point as the Chargers won 25-20.

“We really stayed composed through this thrilling match,” Culver said. “This team really plays for each other.”

El Toro rode their wave of momentum during the second set with kills by Nieman and Koko Kirsch but Mission Viejo always seemed to have an answer.

The Diablos even took an 11-8 lead when outside hitter Danica Wulf scored a kill, but El Toro battled back.

The duo of Nieman and Kirsch worked together to keep the set close and the team finished with three consecutive points to claim a 25-21 win.

“We knew if we kept the pressure on them the whole time we would end up winning,” said Nieman, who finished with 14 kills. “We just had to limit our errors.”

Mission Viejo left their bench following the second set. When they returned, they brought some fire with them.

The Diablos raced out to a 8-3 advantage to start and never saw their lead dip below three points.

All it needed to claim the set was a Sam Lister and Chloe Karn to finish with a block as the Diablos took the third set, 25-16.

“Mission (Viejo) is a really good team and they came out and showed they didn’t want to lose,” Culver said. “They really turned the momentum around and we had to find our stride again.”

Culver knows his opponent really well. Not only did the two teams play three matches during the their regular season schedule, but Culver coached Diablos coach Brooke Nicholson when he was a teacher at Mission Viejo.

And his former player continued having her team fight.

Mission Viejo controlled the first half of the set until El Toro made a run.

Nieman and Kirsch halve played together since they were 11 years old and the two helped El Toro battle back and take the lead.

It wasn’t before long the players started celebrating and the Chargers student section rushed the court as they took one step closer in their journey to a CIF-Southern Section Championship.

The finals will take place next week and El Toro will face the winner of Monday’s Etiwanda-JSerra semifinal match.

“I’m so proud of them,” Culver said. “We need to prepare for who ever we play and hopefully we pass and serve the way we did tonight.”