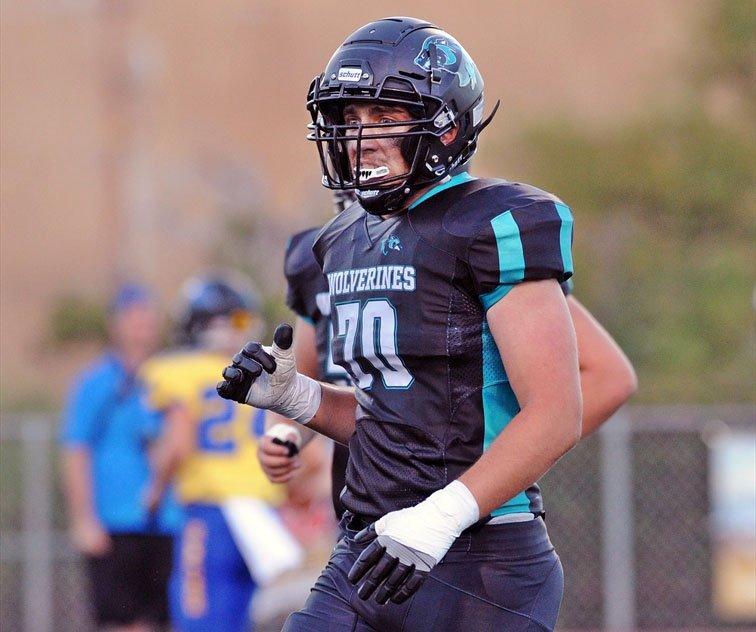 An Engineer on & off the field

Aliso Niguel defensive lineman Evan Comisky gets ready to line up during a game against St. Alberts of Alberta on Aug. 24, 2019. Comiskey plans to attend MIT to get a degree in engineering and play football.

An Engineer on & off the field

His success in the classroom has taken him through honor classes such as AP physics and AP calculus.

He plans to attend MIT in the fall of 2022 to pursue his dream of working on engine and performance design for an F1 race team.

“My dad was a mechanical engineer, so that kind of inspired me,” Comiskey said. “I just always had the most fun in the math and science classes. I figured I’d just stick with it.”

But, along the way, he also found another passion.

No, it wasn’t as obvious as signing up to the school’s American Engineers club. He already knew he was going to join that.

“It’s funny because, when I moved from Los Angeles to Orange County midway through eighth grade, I didn’t really know anyone,” Comiskey said. “I figured football would be a good way to make some friends.”

The only problem was that Comiskey didn’t know anything about the sport. He had to learn the basics from a book his father bought for him, “Football for Dummies”.

“At least I was out doing something with friends rather than sitting at home playing video games,” Comiskey said.

He signed up as a defensive lineman and l, after he got his first sack during his first game, he was having fun and decided to keep with it.

“His dedication for football really started after his freshman season” Aliso Niguel head football coach Michael Calahan said. “We brought him up into the weight room and quickly went from the freshman rack to the stronger racks. I thought, ‘We might have something here.’ He never stopped working.”

Comiskey’s career blossomed into varsity during his sophomore and junior seasons. In 2019, he played in 10 of 12 games and led the Wolverines in sacks, including three in a playoff victory against Santa Ana.

“The fun and excitement of the game completely outweighed the scary aspect of it,” Comiskey said. “After hours of school and hours of homework waiting for me after I get home, it’s nice just getting on the field and having some fun.”

During his junior year, Comiskey made it a point to put himself out on Twitter, including tweeting about his 1560 SAT score, and one of the MIT football coaches reached out to him.

“MIT is obviously the best school to become an engineer at,” Comiskey said. “The long-term goal was always to do well in class and see if I can get in there.”

MIT is part of the NCAA Division III and, as such, doesn’t allow athletic scholarships, but according to the Division III website, 75 percent of student-athletes receive some sort of merit- or need-based financial aid.

The Engineers, comically depicted with a beaver mascot, started their football program in 1881 and lasted until 1901. The program was re-established in 1987 when it joined the NCAA Division III.

MIT football has won the New England Women’s and Men’s Athletic Conference (NEWMAC) championship over the last two seasons but lost in the playoffs to Johns Hopkins and Muhlenberg College in Allentown, Pennsylvania respectively.

Comiskey is still waiting, along with every other California high school football player, to see if he has a chance to play competitively this season while the COVID-19 pandemic is ongoing.

He’s optimistic and remains ready. Calahan said Comiskey have really honed his skills and put in extra work during practices.

“These are good kids,” Calahan said. “It’s tough, because I just want to see them play.”

No matter what happens, Comiskey is ready to move forward.

He has a vision for what his future is going to look like both on and off the field.

The question is, is Comiskey a football player on track to get a degree in engineering or is he an MIT student just having fun playing football?

“I’m both,” Comiskey said. “I think studying and disciplining yourself applies to both school and football very well.”