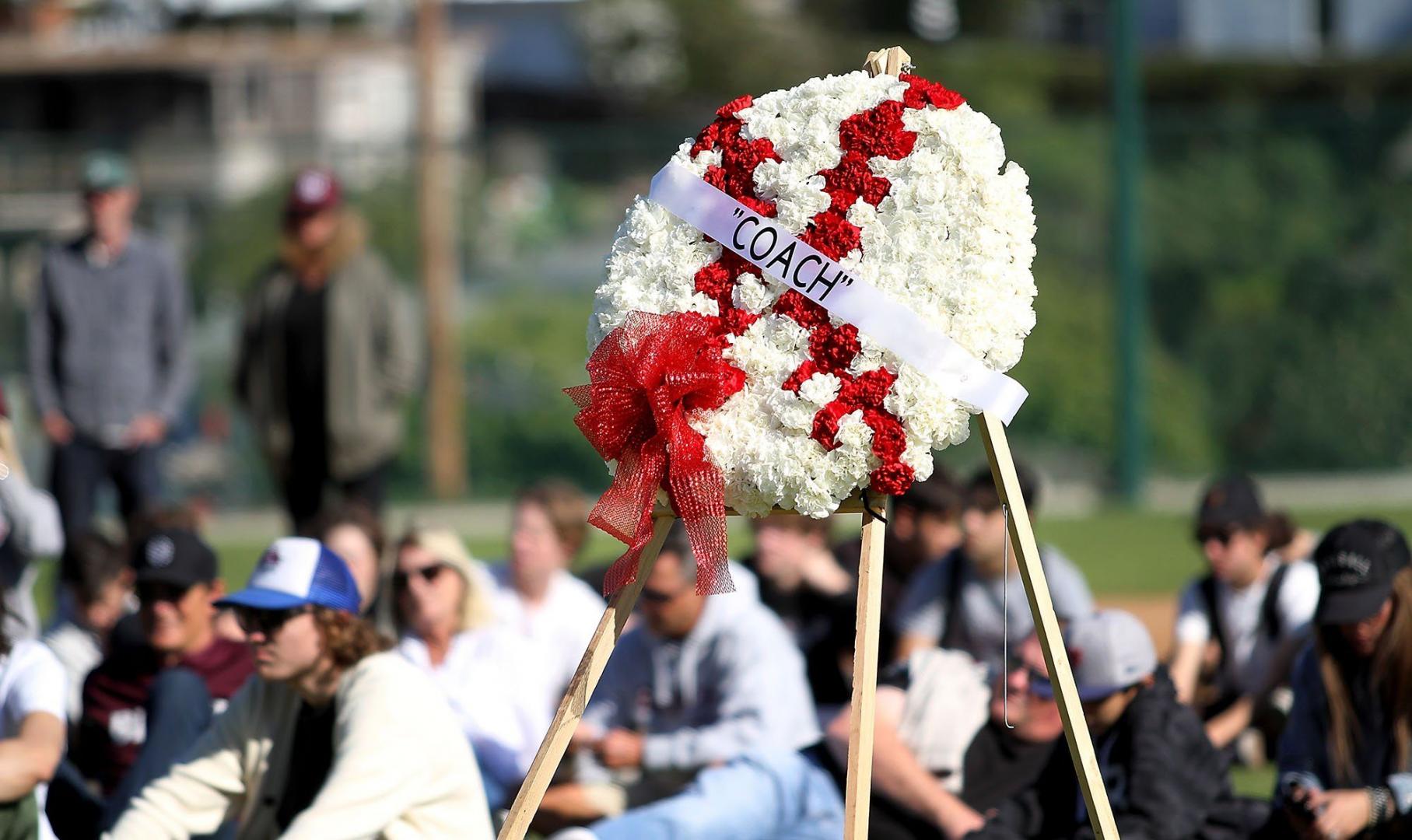 A wreath was made as part of a memorial for Laguna Beach baseball coach Jeff Sears on Saturday, Jan. 22, 2022. Sears died unexpectedly Jan. 16. (Ryan Kuhn, SOCoPrepSports.com)

He would go round and round, raking the infield in the classic figure-eight pattern.

“There was not a blade of grass that Coach Sears did not cut, and there was not a speck of dirt that he did not rake on this field,” Jon Hendrickson said.

Hendrickson, a former Laguna Beach assistant baseball coach, explained how Sears used to not let any other coaches drag the field, mainly because his demand for perfection was so great.

There would be days that Sears sent his players home because they were just one minute late for practice.  Sears gave them 14 minutes to finish up at school, run over to the baseball field, get dressed, and be ready for warmups. If they didn’t make the cut, they were sent home.

Sears’ demand for excellence was extreme, but in the end, he genuinely cared for every player and coach under his guidance.

On Saturday, hundreds of friends, family, and members of the Laguna Beach community convened on the high school’s baseball diamond and returned the favor. They came to pay homage to their friend, colleague and coach, who died on Jan. 16. He was 55 years old.

“It just goes to show how important he was to not just the baseball community, but the entire Laguna Beach community,” Breakers pitching coach Jairo Ochoa said. “He meant something to a lot of people, and it’s nice to have that support.”

Sears’ coaching tree is extremely impressive, and Saturday’s showing was a testament to the quality of mentorship that he provided.

“Jeff Sears gave 100 percent of everything that he ever had into the [Laguna] baseball program and the Laguna Beach community,” Conlin said. “Nobody loved baseball more than Jeff Sears, and very few people knew the game like Jeff Sears.”

Several of Sears’ peers, friends and players also shared their favorite memories of the late coach; including tales of late night bar hopping, recounts of invaluable coaching advice, and other anecdotes that incited laughter, and in some cases, tears from the attentive crowd.

Each speaker emphasized how masterful Sears was at storytelling, and how much the coach genuinely cared about his players.

The Breakers’ late skipper was the single most successful coach in program history. He held a stout 143-95 (.601) record over his two stints as head coach, totaling nine seasons.

Along with coaching the Breakers’ varsity baseball squad, Sears worked in the classroom as an instructional assistant for special education.

“I don’t know how he did it, but he just had a way of putting a smile on kids’ faces,” Chinn said. “He had absolutely the biggest heart.”

Before the memorial, the attendees formed a crowd that packed in the bleachers, and spanned all the way across the outfield wall along St. Anns Drive to watch the Breakers play Woodbridge in a winter-ball game.

Laguna Beach came up short in the seven-inning exhibition game.

After the game, senior pitcher Nick Bonn touched on how the loss of Coach Sears impacted the team’s chemistry.

“It gives us a lot of inspiration and motivation to do well in practice,” Bonn said. “A big thing with coach Sears was doing well on the field and off in the classroom, and I think we’ve really focused on carrying that out.”

Laguna Beach’s baseball team will carry a shoulder decal this upcoming season honoring their coach, as well as wear practice shirts with Sears’ name on the back.

“This field was Coach Sears’ Field of Dreams,” Hendrickson said, looking out onto the Laguna Beach baseball diamond, where in center, Jeff Sears’ number 20 stands alone.

“Just like Ray Kinsella, there would be nights that he would sit and stare at what he built. … This is heaven.”