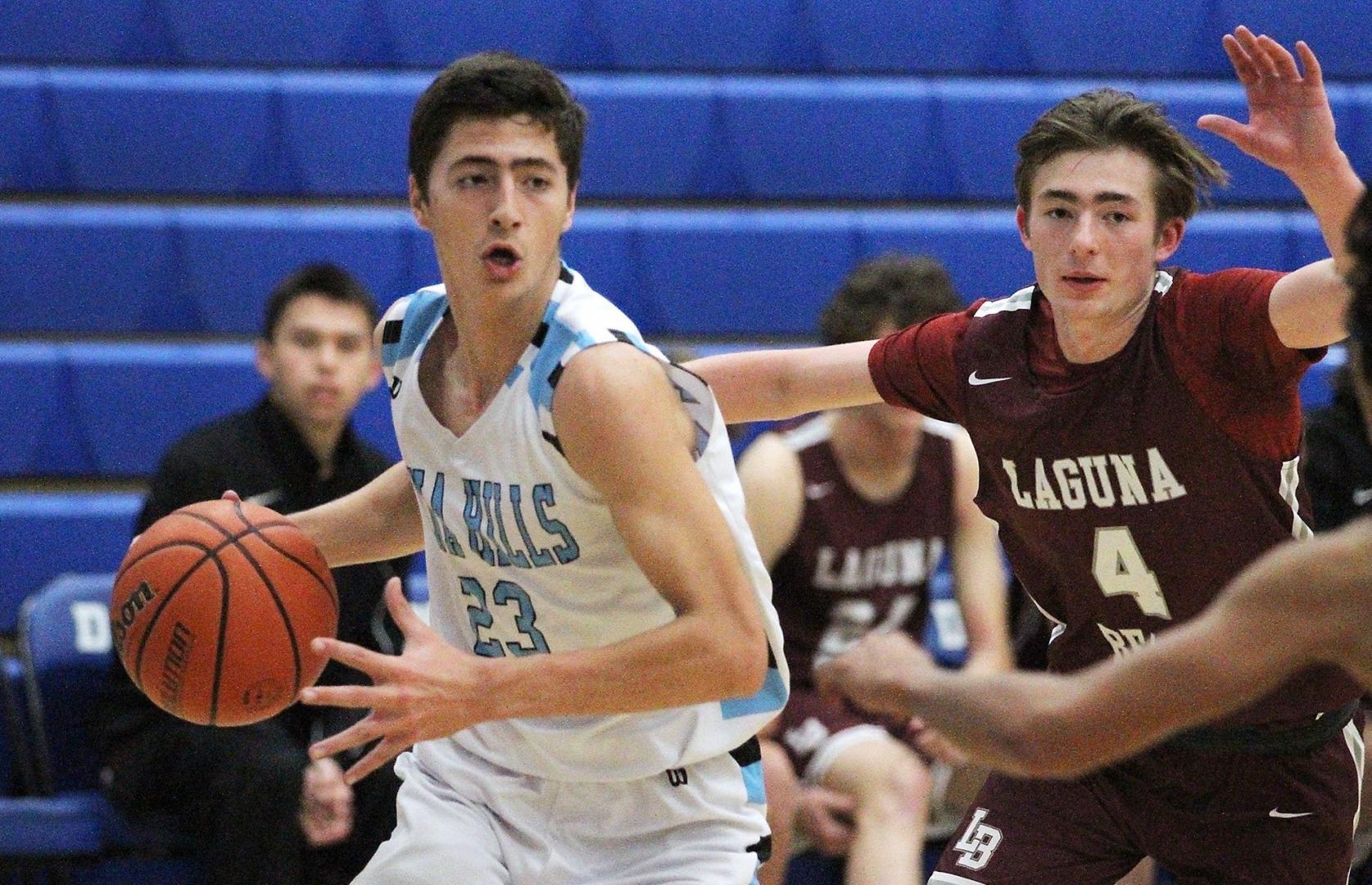 “If he gets going and he starts making shots, it’s going to be tough for teams to beat us,” Desiano said.

“He’s just a heck of a player,” Desiano said.

Dana Hills entered the night winning six out of its last seven games and it didn’t take long to grasp the momentum.

The Dolphins hit a pair of 3-pointers and Haugh added his first as held a 12-2 lead and forced Laguna Beach to take a time out.

“Laguna Beach helps really hard on the backside so I knew I could find my spot,” Haugh said. “Once I found out I could shoot, I knew I had to be a shooter.”

By the second quarter, Haugh’s confidence was soaring. He hit two more from the corner and watched his teammates get involved when sophomore Logan Scodeller hit a couple of 3-pointers of his own.

It wasn’t long before Dana Hills held a commanding 27-12  lead.

“We shot it well but we also made the extra pass,” Desiano said. “We told them (shots) would be there but don’t just take the first one you see. We shared the ball beautifully.”

Haugh added one last shot as the halftime buzzer rang out, hitting a 3-pointer from center court. The Dolphin student section came to its feet as Dana Hills held a 37-19 advantage.

Desiano said playing at a faster pace has worked out with this group of players.

“When we get out and run we don’t have to think as much,” Desiano said. “Sometimes as a coach, you just have to let it go.

Laguna Beach found its stride at the start of the second half when 32 scored the first six points, but the Dolphins quickly took back the momentum.

Haugh scored three consecutive buckets and hit his six 3-pointer as the Breakers were forced to take another timeout, down 49-25.

By the fourth quarter the Dolphins saw the finish line in sight as senior forward Adam Pellini slammed home a dunk on a fast break.

“It’s just so fun playing at our speed,” Haugh said. “I was especially excited when Adam put down that dunk.”

Dana Hills’ win was the largest margin of victory against Laguna Beach since its 31-point win in 2009.

But while the Dolphins have started its season off to a quick start, Desiano knows there is still a long season ahead of them.

This Tuesday, Dana Hills plays Huntington Beach in the North/South Classic at Tesoro High School before returning home on Wednesday to face a San Clemente team it hasn’t defeated in nine consecutive tries.

As for Laguna Beach, the Breakers will match up against San Juan Hills during the same North/South event.