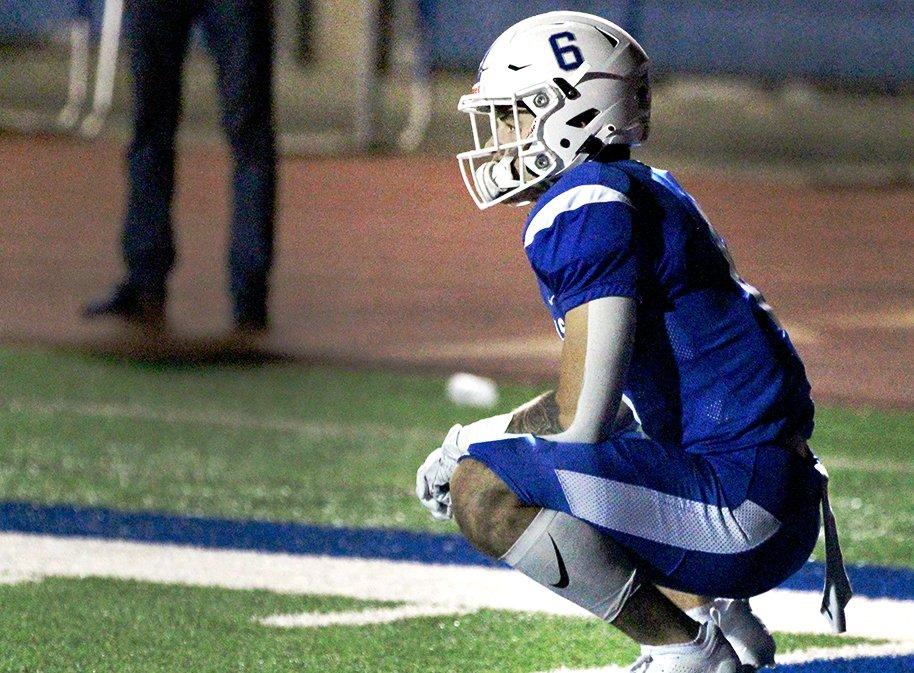 DANA POINT — Dana Hills’ quest to make history will have to wait another year.

The Dolphins came up five yards short in overtime as they watched Portola celebrate their second consecutive Pacific Hills Championship.

The scoreboard in front of them read Portola 29, Dana Hills 26.

Everything was going right.

The Dolphins won the coin toss and held Portola to a field goal to start the overtime period.

They marched down to the 5-yard line, but junior quarterback Bo Kelly’s pass missed its mark to a double-covered Omarjaye Black on fourth down.

“I’m kind of in shock right now,” Dana Hills senior wide receiver Will Craven said. “I don’t want to believe that happened, but it did.”

The Dolphins had a chance to tie the score and send it into a second overtime with a short field goal, but co-head coach Curtis Madden said he didn’t hesitate in going for the win.

“I wanted to finish it right there,” Madden said. “This was a championship game and I had to be aggressive in the second half with the play calling to get us back in it.”

The Dolphins were forced to play from behind for most of the second half after Portola took the lead with 41 seconds left in the second quarter.

Dana Hills’ deficit grew to as much as 12 points with seven minutes remaining in the game, but it kept chipping away.

Kelly found Black for his first touchdown of the game on a 5-yard strike with 4:49 remaining. After a defensive stop, Kelly tied the game with 51 seconds left on another touchdown pass to Black, this time from 25 yards out.

Kicker Kian Afrookhteh had a chance to take the lead but missed the PAT.

Black, a junior who transferred from Mission Viejo, entered the game as Kelly’s go-to receiver with a team-high 15 catches and four touchdown receptions. He added three more touchdowns in the losing effort against Portola.

“We got the ball in our playmaker’s hands. That is all we could ask for,” said Kelly, who passed for 316 yards and three touchdowns.

The four-headed monster of Nova Kebeli, Trevor Yue, Andy Lo and quarterback Aiden Russell controlled the clock for the majority of the game, but the Bulldogs scored their first touchdown in the second quarter on a 31-yard touchdown pass from Russell to Parker Olthoff.

Russell then found Lo for a 5-yard touchdown pass just before halftime to give Portola the lead.

During halftime, Dolphins senior defensive tackle Javier Arroyo Jr. spoke up and reminded his team that they had a chance to win the school’s first outright league football title.

“I need to make sure my teammates are in check,” Arroyo said. “We spend so much time and effort together, learning as one. We all need to bring our A game. We can’t be in our B or C game. We have to be in tip top shape.”

The Dolphins continued to allow Portola to control the clock and score two more touchdowns in the second half. A fumbled punt return didn’t help, either.

But, after the dust from the gunfight had settled and the coaches told the players how much they loved them, Madden thought back to the effort his players gave.

“I’m very disappointed in the outcome, but I’m proud of my kids,” coach Curtis Madden said. “They showed the heart of a champion. They were resilient. They did something I have never seen them do, and that’s come back from two scores in the second half like that.”

The Dolphins still have one final road game against Irvine on April 16 after Northwood canceled its season due to injuries.

Kelly knows this loss hurt, but to those who are returning next year like himself, Black and others, a loss like this will put a chip on their shoulders during this coming fall season.

“I honestly think this will help us build some character,” Kelly said. “Anytime you lose like this and you get to play the same team next year, You will remember it. “