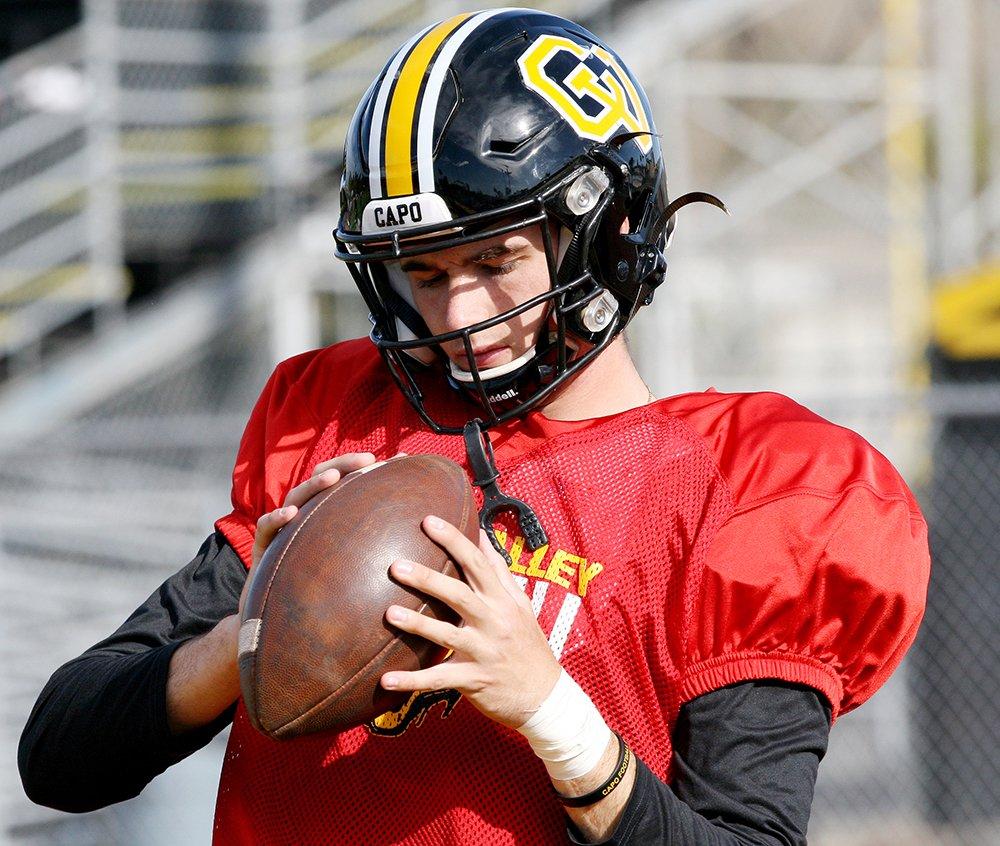 Capo Valley senior quarterback Dartanyon Moussiaux prepares to throw a ball during practice on Wednesday. Moussiaux played one season for Santa Margarita and JSerra before finding a home with the Cougars. (Ryan Kuhn, SOCoPrepSports.com)

MISSION VIEJO — Quarterback Dartanyon Moussiaux stands in the end zone of Capo Valley’s football stadium with a smile on his face.

He jokes with teammates about their last epic game of Madden but is still focused on the season ahead of him.

Friday’s game against San Juan Hills is another big test for the Cougars in this shortened season, and Moussiaux wants to make the most of his senior year.

But you can tell he is happy regardless of the outcome this week.

“I just feel a brotherhood here,” Moussiaux said. “I love these guys with my whole heart.”

Moussiaux’s fondness for his teammates comes after two years of jumping around the Trinity League.

But he doesn’t have to do that anymore.

Moussiaux is at home with his football family at Capo Valley.

Moussiaux grew up loving the game of football.

He said he started playing 13 years ago, when he was just five years old.

After jumping around positions that included wide receiver, tight end and offensive line, he found he was most comfortable at quarterback, more specifically, as a pocket passer.

“I love being a pocket quarterback. I don’t think anything is wrong with it,” Moussiaux said. “I mean how long has (Tom) Brady been doing it?”

At the pro level, a Wall Street Journal article this past January said that quarterbacks accounted for 13.9 percent of the league’s rushing attempts.

But Moussiaux found success another way.

“I kind of figured it out at an early age that getting to the slot receivers for 10 yards or so was way easier than making a move (to run),” Moussiaux said.

He was ready to start his high school career but, after one year, his path led him in a different direction.

Moussiaux attended Santa Margarita for one season before transferring to JSerra.

During his two years in the Trinity League, he didn’t play a varsity snap, so his family decided to transfer him again, this time to Capo Valley.

“When I was at Santa Margarita, it just wasn’t the right fit for me,” Moussiaux said. “When I went to JSerra, I thought it would be better, but (the coaches) wanted to go a different way at quarterback.”

The Cougars at the time hired new head coach Sean Curtis with a brand new quarterback joining his team.

“He fits this team,” Curtis said. “Last year was his first varsity experience. What really surprised me was how tough he was.”

Capo Valley played one of the harder schedules in the area, with games against Mission Viejo, San Clemente and Tesoro over three consecutive weeks, but Moussiaux continued to play well.

“For our quarterback to stand in there during a stretch like that when we needed him to gave us a chance in all of those games,” Curtis said. 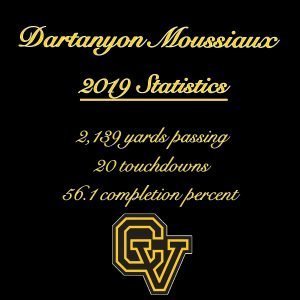 Moussiaux finished his first season as a varsity quarterback completing 56 percent of his passes for 2,139 yards passing and 20 touchdowns.

“He’s just been a leader for us in the offseason. I’m excited to see what we can do over these next few weeks,” Curtis said. “What people don’t realize is that we graduated our top three receivers last year.”

While the Cougars graduated a total of 1,869 receiving yards and 18 touchdowns from Jack Haley, Jake Muller and Brady Kasper now at Division I schools, Moussiaux spent the offseason getting used to his new receiving core and is ready to improve.

Now, even with 16 months off because of the pandemic, he hasn’t missed a beat.

In his season debut against San Clemente, he threw for 320 yards, two touchdowns and an interception.

“I learned (from that game) that I have to finish,” Moussiaux said. “We had (San Clemente) at halftime with our foot on their throat, but we didn’t finish the job. Coming into this week we just have to dominate.”

Moussiaux will lead the Cougars in their first home game of the season against San Juan Hills on Friday. He lives in the moment, focused on his upcoming game, and knows an opportunity to play in college will come soon.

He might not have any formal offers just yet, but he has talked to a few Division I schools, including East Carolina, Boise State and Utah State.

And if he has to redshirt somewhere, he is okay with that too.

“Baker (Mayfield) did it and Kyler Murray did it,” said Moussiaux, talking about the Cleveland Browns and Arizona Cardinals starting quarterbacks. “I mean, Baker won the Heisman.”

Moussiaux’s high school journey has taken him on a long and winding road, but he loves his new home. No matter where the Cougars finish the season or where he decides to play next season in college, his teammates, his coaches and the Capo Valley fans will remember the name of their quarterback: Dartanyon Moussiaux.