‘I want them to compete’: Aliso Niguel football generates competitive nature for spring 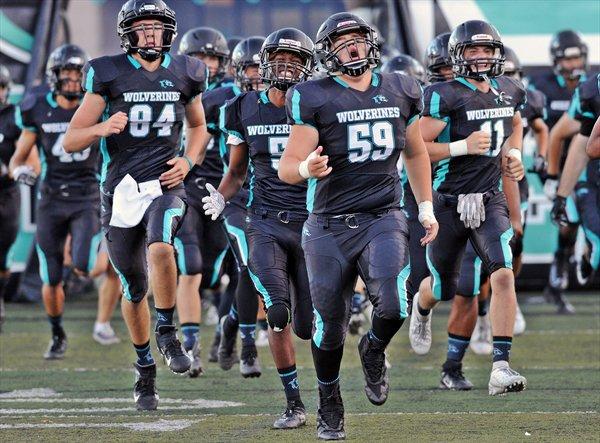 The Aliso Niguel football team run out on the field against St. Albert on Aug. 24, 2019. The Wolverines will start their season on Friday against Tesoro. (Ming Chung Lin, MaxPreps.com)

It finished with eight wins, quarterback Kyle Kyckelhahn threw for 3,000 yards and together they reached the quarterfinals of the CIF-SS Division 8 playoffs.

But, as a new season quickly approaches, there are plenty of changes ahead.

Kyckelhahn and his receiving core all graduated and Michael Calahan was promoted to head coach.

Calahan said it’s been a bit of a challenge with the stop and go of the pandemic but, ultimately, he has instilled a new competitiveness in his players.

“During every practice the intensity is just so high,” senior linebacker Trevor Yamaguchi said. “You can just tell how much pride he has.”

Calahan played football and graduated from the University of San Diego. During that time, he realized how and why he needed to elevate his intensity.

Calahan quickly found out that high school football is nowhere near the level of an NCAA FCS school, so he managed to make it fun while still keeping that intensity.

Now, he takes his philosophy into a spring season with an almost entirely new group of starters.

The Wolverines graduated 33 seniors, but have 31 seniors on the roster.

“It’s a double-edged sword of sorts,” Calahan said. “When you get these big senior classes, the juniors don’t get to play as much, but they do have some experience and are ready to make their own mark.”

Senior Trevor Romaldo’s primary position is safety but he will also take over the quarterback position.

He had limited game time behind Kyckelhahn but is confident he can lead by example.

“I have to keep that train going because (Kyle) was a great quarterback,” Romaldo said. “I might not be as good as Kyle was but I don’t doubt myself. I think I’m pretty efficient passing and running the ball.”

Romaldo will also have some help with running back Chase Christner and tight ends Quentin Biebel and Sky Ellis alongside him.

“Trevor is a gamer,” Calahan said. “He will run the plays and make the right reads. The only difference is that Kyle had that ability to improvise if things broke down.”

On the defensive side of the ball, Romaldo will pair with Yamaguchi and defensive lineman Evan Comiskey.

Comiskey has signed to play at MIT next season.

Aliso Niguel understands there is no playoff and there are no CIF-SS championships but what they can play for is the senior class and building for the future.

It might not be easy with teams such as San Clemente, Trabuco Hills and Capo Valley on the schedule, but Calahan knows that comes with the territory.

“Every team in South Orange County plays sound football,” Calahan said. “My biggest thing is we are getting guys reps, exposure and getting them game ready. At the end of the day, these five games are about the kids. I love it.”

Aliso Niguel starts its season on March 19 when it travels to Tesoro.