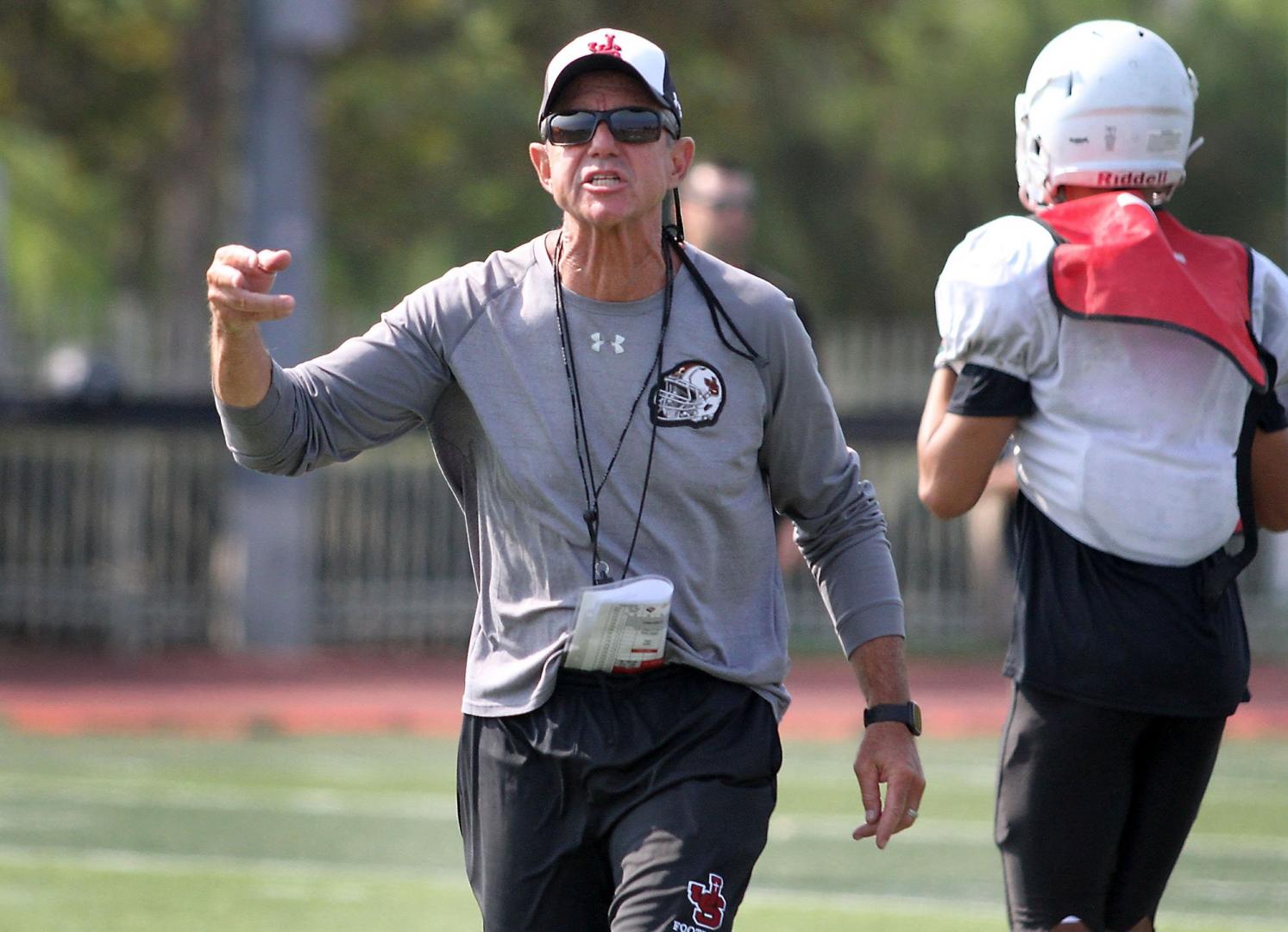 JSerra head football coach Scott McKnight shouts instructions to his team during a practice on Aug. 16, 2021 in San Juan Capistrano. McKnight was promoted to head coach this past offseason and is looking to turn the progran around after an 0-5 spring. (Ryan Kuhn, SOCoPrepSports.com)

The Lions went winless last spring and lost by an average of 45 points per game.

And in navigating a difficult Trinity League, he knows his players need to grow up quickly.

“We have to hold them accountable in everything they do, and just get bigger and stronger in the weight room,” McKnight said.

McKnight was announced as the fifth head football coach in the program’s history. For the last 10 years, he has been on the staff as special teams coordinator and as associate head coach under Pat Harlow.

“A culture starts with good people, and Coach Harlow is a great man,” McKnight said. “We just want to continue this culture with these players. We will play at a faster pace and energy.”

“It’s a very progressive offense that is well-suited for our personnel,” McKnight said.

Mills split time with Jaxon Potter and saw some success, including a 68-yard touchdown pass against Orange Lutheran.

“He’s really engaged in the process; he’s the first guy to get here every day,” McKnight said. “He is very determined and, on the field, he can escape pressure. That will be important because we are a young team.”

The Lions also feature a handful of players that will have time to grow.

“It’s a process,” McKnight said. “I don’t want to necessarily use the word rebuild; it’s just an extension of what we were working on in the spring. Obviously, there hasn’t been much time during the spring.”

While the Lions are equipped with a young team, there are some seniors McKnight can lean on, such as defensive lineman Grant Hessler and linebacker Luke Berry.

“Last year was definitely a learning experience, but we have some young players stepping up and we are trying to build a great culture here,” Berry said.

Berry is in his fourth season playing in the Trinity League and he keeps reassuring his young core to trust the coaches and their teammates.

He was in their shoes not too long ago.

“I was small freshman. We were playing (St. John) Bosco and I went up against a 6-foot-5 lineman. I was 5-foot-6 at the time. It’s a battle but we will prepare you for it,” Berry said of the Trinity League. “You have to trust all your preparation and you will be successful.”

J Serra starts its season on Friday against Santiago Canyon but will wait until Oct. 1 to jump into the Trinity league with a home game against Santa Margarita.

“It’s really just trying to get our guys to grow up quickly,” McKnight said. “We have an opportunity, so let’s embrace it.”