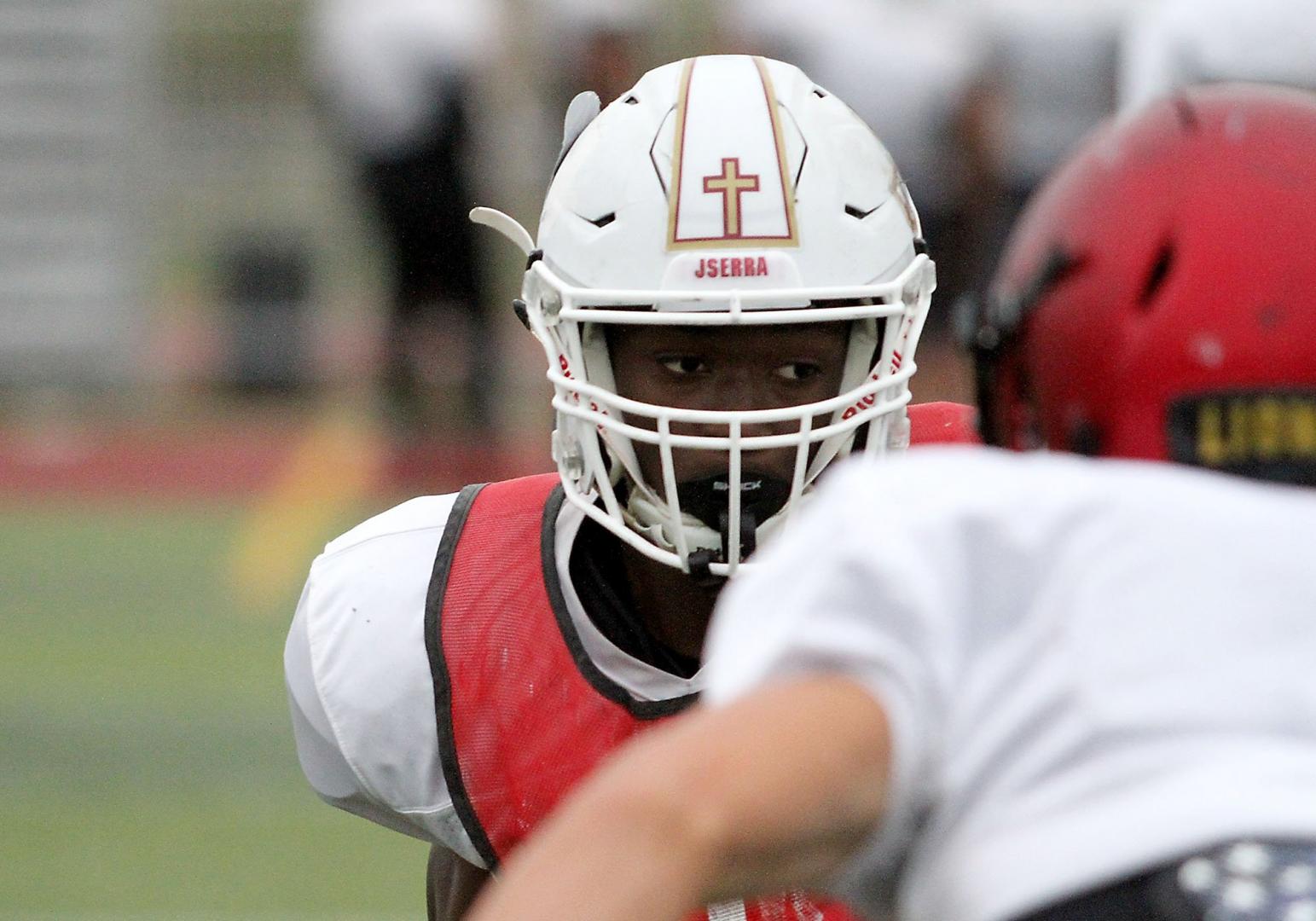 JSerra sophomore running back Kamar Gabourel works on a drill during practice in San Juan Capistrano, Sept. 27, 2021. Gabourel and the Lions will face Santa Margarita on Friday. (Ryan Kuhn, SOCoPtrepSports.com)

SAN JUAN CAPISTRANO — When JSerra’s Scott McKnight was hired as the school’s head football coach late last spring, he inherited the task of getting the Lions ready for arguably the most talented league in the country.

Ready or not, it’s here.

JSerra will welcome in a local rival in Santa Margarita who will bring a familiar face.

This season he has already thrown for 1,402 yards and 14 touchdowns.

While Santa Margarita has shown to throw the ball this season, the Lions have seen a successful rushing attack with their running back duo of Jared Referente and Kamar Gabourel.

McKnight described Referente as a weapon with his ability to hide behind offensive lineman with his size and speed while Gabourel on the other hand uses his shiftiness and ability to run though defenders to gain yards for the Lion’s offense.

Last week the two running backs aided the offense in a 44-0 shutout of Newport Harbor.

“We work hard everyday in practice, not just for next week but for the rest of the league,” Gabourel said. “Trinity League to me means top of the top, the best teams in the nation.”

Not only will the Lions travel to Mater Dei, who was ranked as the No. 1 team in the nation by Max Preps, they will also face No. 3 St. John Bosco.

The rest of the Trinity teams aren’t to be messed with either.

Servite is currently undefeated and has been steamrolling their opponents including Edison, Mission Viejo and Sierra Canyon.

“I embrace the challenge, I enjoy it,” Gabourel said. “When you’re out there guarding five star recruits at the end of the day it’s going to make you better.”

McKnight and the Lions have embraced the challenge of facing a tough schedule. They have had to grow up quickly since the Trinity League was formed.

In his first year, he has really been put to the test. Even after coaching in the Sea View league with San Clemente, this year’s league will give him a first hand look at the intensity of the Trinity League.

But his leadership and confidence going into this year has began to find its way to the players.

“Everybody knows the importance of each game, at the end of the day it’s still a football game,” McKnight said. “The size of the field doesn’t change. This week is going to be fun, it’ll be a packed house.