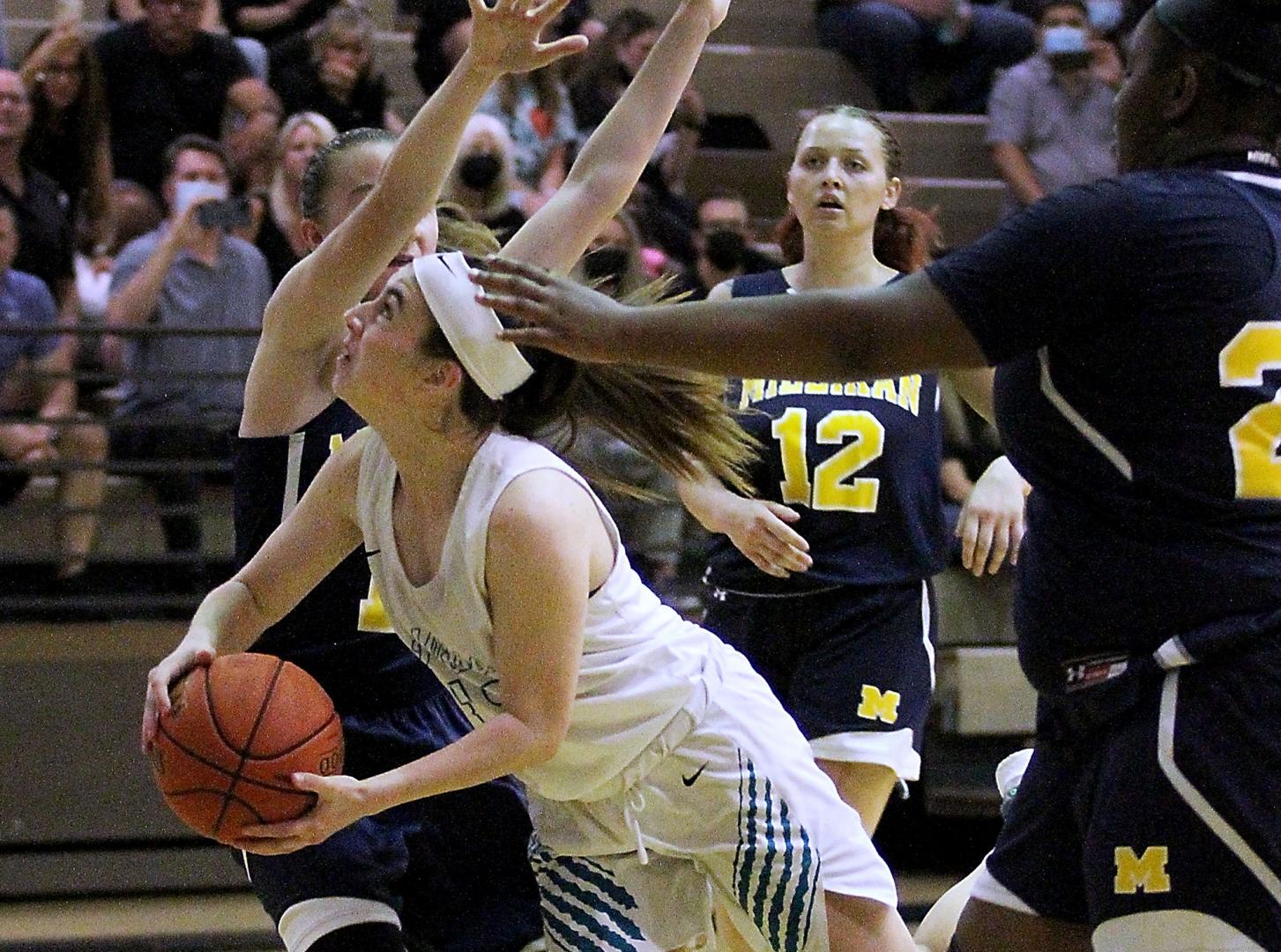 ALISO VIEJO — What happens when your top scorer heads to the bench in the first half with three fouls?

The Aliso Niguel girls basketball team would tell you to have a next player up mentality.

With the Wolverines’ leading scorer Shayla Gillmer watching the majority of the second quarter from the sidelines because of foul trouble, Cabrera grabbed ahold of the spotlight with  23 points as the Wolverines defeated Long Beach Millikan 79-64 in a the first round of the CIF-Southern Section Championships.

“She puts so much work in and is in the gym at 6 a.m. five days a week,” Wolverines coach Brad Johnson said of Cabrera. “That earns you that green light to take shots.”

“I put a lot of time into my shot,” Cabrera said. “I’ve been working really hard just getting shots up.”

While Cabrera sparked the offense for the majority of the game, she started by taking a backseat to Shayla Gillmer.

She scored 11 straight points over a five minute stretch and Aliso Niguel held a 17-14 lead at the end of the first quarter.

Gillmer has led the Wolverines in scoring all season by averaging 15.5 points per game and has only scored less than 10 points in a game twice. Once was a loss to Troy and the other was a loss to Orangewood Academy.

“There is no question Shayla is an amazing player,” Johnson said.

But just over two minutes into the second quarter, Gillmer was forced to sit after picking up her third foul.

“I was just trying to be aggressive,” who ended up scoring 23 points despite being in foul trouble for the majority of the game.

Cabrera continued to push the offense forward with Gillmer watching from the bench.

After a second three pointer, she and her teammates ran into halftime with a 33-29.

“One of the things that makes this team great is that we have a lot of players that can play big minutes and can make some big plays for us,” Johnson said. “The only way you can win in CIF is if you can go to your bench when you need it.”

Millikan was keeping pace with the Wolverines in the first half, but the second half proved to be the difference.

Aliso Niguel continued to push and when Sara Eyre converted an old fashioned three-point play with about three minutes into the third quarter, the Wolverines held a 41-31 advantage.

“It was good to see us play at that pace,” Johnson said. “We want to play fast. We have been playing fast all year but that is one of the fastest paces I have seen us set this year.”

Millikan put together a small run to close out the third quarter when Kylie Ishibashi hit a 3-pointer to cut the deficit down to four points but the momentum didn’t last long.

Aliso Niguel came out pushing the tempo in the fourth quarter and went on a 22-6 run over five minutes of play.

Cabrera hit her fifth three-pointer and the Wolverines cruised to victory.

Aliso Niguel will host Troy in the second round on Saturday.

The two teams met back on March 31 in Aliso Viejo and the Warriors won 59-49.

“There’s a certain confidence you get when you see somebody you know you can compete against,” Johnson said. “We feel good.”

Officials told fans to refrain from using cowbells or noisemakers during the game. After issuing a warning at halftime if the noise continued Aliso Niguel would receive a technical foul, sure enough in the third quarter the refs stopped play and issued the technical foul.

Afterwards, fans started chanting “read the rulebook,” expressing their displeasure about the call.