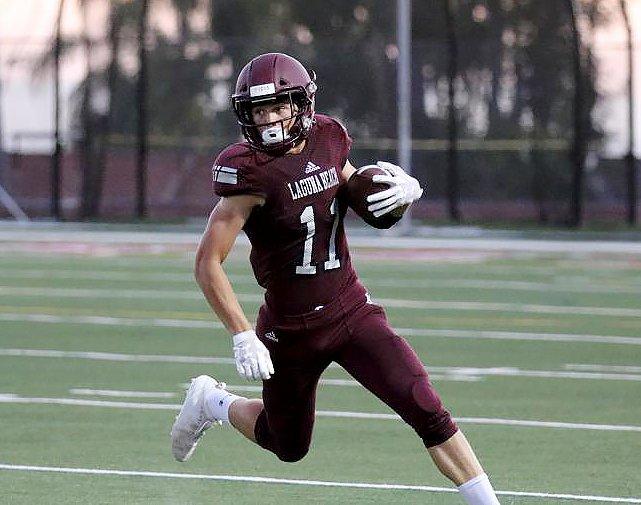 Laguna Beach running back Jackson Golden competes against Big Bear on Sept. 9, 2019. The Breakers will return GOlden but overall be a young team. (Courtesy of Laguna Beach athletics)

“We have been lucky to get linemen over 200 pounds,” he said.

And the Breakers’ starting middle linebacker stands at a mere 5-foot-5.

“That hasn’t limited us from being successful,” Shanahan said confidently. “We have made the playoffs three out of the last four years.”

While Laguna Beach’s coaching staff understands that size matters not, the challenge could be the team’s lack of experience. The team returns just two starters on offense and three on defense.

But Shanahan said he is prepared. It starts with having the same coaching staff that works with every team, regardless of being frosh/soph or varsity.

“The sophomores are ready to go right away,” Shanahan said. “There are no terminology, scheme or team issues. When they are done with their freshman season, they know 65 to 70 percent of what they are going to run for the rest of their high school career.

“The key is going to be that leap to varsity.”

Laguna Beach finished last season with five wins and lost two League games by a combined 14 points to get left out of the playoffs.

“We lost it all, but we are going to stay with it,” Shanahan said. “If we could run it down people’s throats, we would, but it’s just not an option (because of our size).”

Junior Will Bingham will take over the quarterback position from Johnson, who finished his senior campaign with 2,300 yards passing and 23 touchdowns and is now at NCAA FCS Morehead State. Despite seeing very limited action last year, Shanahan is confident in his new leader.

“He can make most of the throws and, eventually, he will get to a place where we can be an efficient passing team again,” Shanahan said.

The offense will also have returning running back Jackson Golden.

Braun is one of the youngest coordinators in the area at only 23 years old, but Shanahan said he coached him while at JSerra and he is one of the hardest workers he has seen.

Laguna Beach starts its season on Friday when it travels to Jurupa Valley, and the coaches feel confident after their young team saw some success during scrimmage last Saturday against La Serna.

“You can expect some grittiness from us,” Shanahan said. “These are some kids who fought hard through this year. We know there are going to be some challenges but we have to find a way to hold up physically, especially in a league that consists of Marina and Ocean View.”

The Breakers’ only home game comes on April 2 against Ocean View.