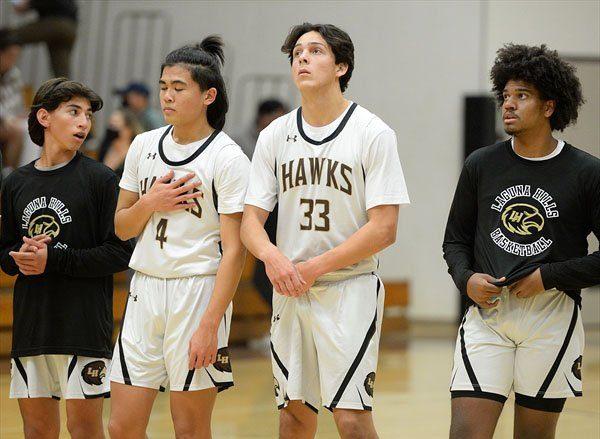 Members of the Laguna Hills boys basketball team stand before a game against Irvine on Dec. 17, 2021. Laguna HIlls had a six-game winning streak going until it lost to Portola, 58-48 on Friday, Jan. 21, 2022. (Ming Chung Lin, MaxPreps)

Then, Portola came into town.

“It was a tough game,” Laguna Hills head coach Dave Yates said. “Give Portola credit, they came out ready to play.”

Portola rallied in large quantities, fighting for the separation needed to steal a game on the road against their league rivals.

The first quarter was a classic punch-counterpunch exchange, with both teams muscling their way into the paint. Towards the end of the quarter, the Bulldogs went on a 6-0 run, and led 14-13 after eight minutes.

Portola was running a 2-3 zone defense, and forced the Hawks to play a very perimeter-oriented style of attack.

Unfortunately, the Hawks’ offense went dry in the second quarter, and Portola rapidly pieced together a 14-0 run.

Bulldogs junior guard Jayden Villanueva was the leading scorer in the period with five points.

Portola was sporting a confident 34-18 lead over Laguna Hills at halftime, but a Hawks freshman with an extremely hot hand would pull the team right back in the game.

Dominic Bolton was the Hawks’ volume shooter in the second half, scoring 19 points via a trio of 3-pointers and 12 points from the stripe.

“Coach [Yates] tells me I have the green light,” Bolton said. “He tells me I can shoot it from anywhere.”

At one point in the third quarter, Bolton was called to the line to shoot four-straight free throws; two for technical fouls on Portola, and another two from a personal foul. The freshman nailed all four, and after hitting another 3-pointer in the next offensive possession, brought the Hawks in as close as 45-41.

Bolton finished the night with 26 points, but it was not enough to overcome Portola’s lightning fast offense, which was scoring the ball in transition with ease.

With the victory, Portola improved to 5-2 in league, while Laguna Hills regressed to 3-4.

The Hawks will look to bounce back bright and early, with a non-conference game on the road against Fairmont San Juan Capistrano tomorrow at 11 a.m.

“We just got to have five guys ready to play at all times, and compete at all times,” Yates said. “These guys will bounce back.”