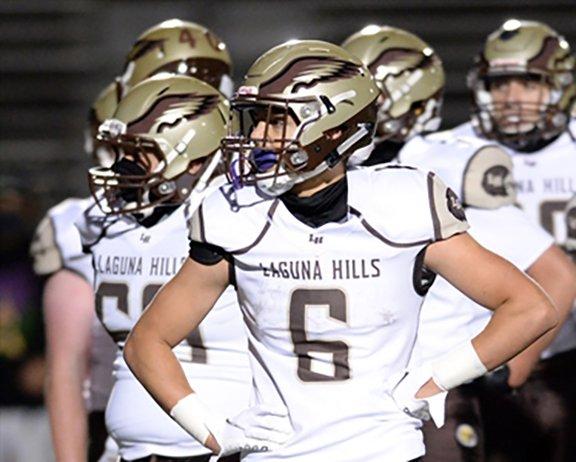 Members of the Laguna Hills football team prepare for a play during a scrimmage against Beckman on March 12. (Ming Chung Lin, Maxpreps.com)

Mitch Leigber wore many hats for Laguna Hills football in 2019.

The three-star Stanford commit led the team in rushing and receiving last season, tallying 1,473 all-purpose yards and scoring 21 touchdowns. He even threw a 50-yard touchdown pass on August 23rd during a 33-20 loss to Marina.

Leigber led the Hawks defensively with 109 tackles and four interceptions, too.

The would-be senior will forgo his last high school campaign as the 6-foot-1, 205 pounder is focusing on competing for playing time as a defensive back for David Shaw’s Cardinals this coming fall.

Laguna Hills will push on starting Friday as the Hawks travel to University for their first game in 497 days.

“It made more sense not to play. I think he’s going to compete for playing time (at Stanford) and he didn’t want to risk getting hurt,” Laguna Hills coach Mike Maceranka said. “They’ve been giving him workouts to prepare for the fall.”

There will still be a Leigber in the backfield and as a defensive back, however, as his brother Troy Leigber will be taking over some of the workload left behind as a sophomore this spring.

The younger Leigber rushed for 44 yards on 11 carries as a freshman and found the endzone once. Defensively he recorded four tackles in six contests.

“We will kind of fill in with his brother,” Maceranka said. “The number changed but the last name and positions didn’t.”

Senior quarterback Hayden Mckenna will be under center full time for the second straight year. During Mckenna’s sophomore year he split time with Matt Der Torossian.

“He’s fantastic. He’s been our leader and it’s his third season on varsity,” Maceranka said. “He’s split time as a sophomore and it’s unfortunate he didn’t play in the fall after seeing the way he matured and is throwing the ball. He’s definitely one of the top quarterbacks in our league, if not the best.”

The Hawks will show opponents a new offensive look this spring going to a shotgun, run-pass-option style from their Wing-T roots. The Wing-T was similar to an RPO but has three runners in the backfield and the quarterback is also free to run.

“We put out a new offense this year and haven’t had a lot of time with it, we’re excited to see it in action,” Maceranka said. “We have a new defensive coordinator and we’re pleasantly surprised. It’s about getting a little bit better and preparing for those three league games.”

Laguna Hills made its way into the playoffs for the first time in four seasons in 2019. The last time — 2016 — was coach Maceranka’s first year at the helm.

“Really it’s just been about building and getting consistency,” Maceranka said. “We were waiting on this group to see how they play. But we still have that core group.”

“It’s been a long time coming and we’ve been looking forward to it,” Maceranka said. “Last week we played a half of football. It’s been good hitting other people instead of ourselves.”